Fatah’s dismissed leader, Mohammed Dahlan, is facing accusations from Turkey and other countries that he's been meddling in their affairs on behalf of the United Arab Emirates. 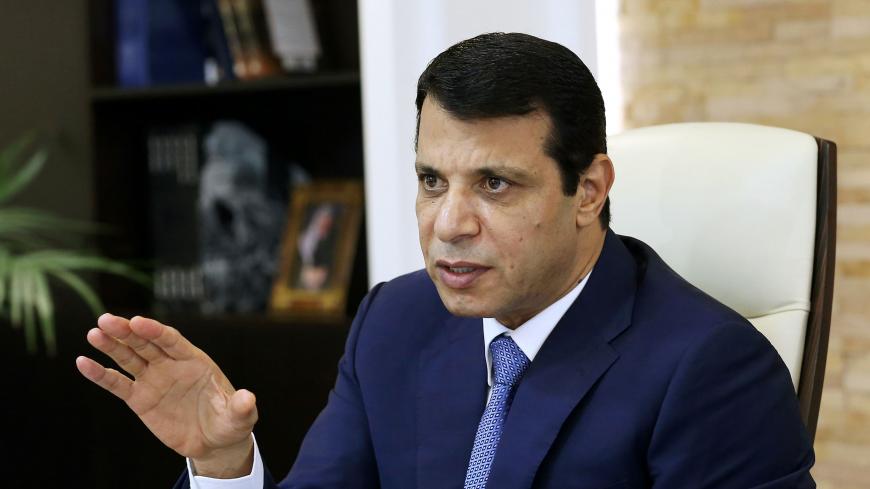 Former Fatah leader Mohammed Dahlan has long been the subject of myriad accusations, but the charges seem especially widespread this year. Several countries have been accusing Dahlan, a Palestinian who lives in exile in the United Arab Emirates (UAE), of interfering in their internal affairs.

At a Feb. 17 press conference in Khartoum, Sudan, deputy secretary-general of the Sudanese People's Congress Party Bashir Adam Rahma accused Dahlan of coordinating with Israel to achieve the secession of Darfur and seize the Red Sea, supposedly in support of UAE interests. After Sudan's then-President Omar al-Bashir was overthrown by the Sudanese military in April 2019, Dahlan had visited Sudan, supposedly contacting Sudanese forces to persuade them to bring about a rapprochement with the UAE and promising them financial support.

Also, Turkey's Minister of Interior Suleyman Soylu announced Feb. 16 to Al-Jazeera that Ankara has added Dahlan to its list of most-wanted terrorists. He reminded the audience of a spy cell Dahlan allegedly had established that was dismantled in April 2019 and said Turkey has many such examples that condemn Fatah’s former leader. He did not rule out allegations from 2018 that Dahlan was connected to the assassination of Saudi journalist Jamal Khashoggi in Istanbul in October of that year.

In another recent move against Dahlan, the London-based law firm Stoke & White called in a Feb. 15 press conference to grant the United States, Britain and Turkey jurisdiction to arrest him and UAE officials for alleged war crimes in Yemen.

And in Tunisia, Noureddine Bhiri, head of the Ennahda bloc in that country's parliament, charged in a Jan. 28 interview with the Anadolu Agency in Turkey that Dahlan and others have supported remnants of the former regime in a bid to thwart the country's fledgling democracy.

This all followed Israeli journalist and security expert Yossi Melman's Jan. 7 blog in Haaretz outlining how Dahlan facilitated the work of Israeli companies in the field of security and information in the UAE.

“The accusations leveled against Dahlan are part of Turkish and Qatari political propaganda," he told Al-Monitor. "Dahlan is calling for putting an end to Turkish colonial aggression against Syria and Libya, and he supports Libya's army in its quest to restore their territorial integrity. This is even though [Turkish President Recep Tayyip] Erdogan sent terrorists to Libya. Dahlan encourages Sudan’s democratization and praises Tunisia’s peaceful transfer of power," Mohsin added.

He added, "The accusations he is facing are part of an organized campaign … aimed at thwarting his efforts to confront those who want to weaken the [overall] Arab nation and control its capabilities, especially after Erdogan failed to fulfill his dream to control Egypt” by reviving the Ottoman Empire.

Dahlan has been residing in the UAE since 2011 and works as an adviser to Abu Dhabi Crown Prince Mohammed bin Zayed Al Nahyan. He was dismissed from Fatah in June 2011 on corruption charges and accused of being behind the assassinations of Palestinian leaders and of preparing for a coup against Palestinian President Mahmoud Abbas. Dahlan denies the charges and accuses Abbas of manipulating PLO and Palestinian Authority (PA) funds.

Abdullah Abdullah, a member of Fatah’s Revolutionary Council and chairman of the Palestinian Legislative Council’s Political Affairs Committee, told Al-Monitor no one should be surprised by the allegations against Dahlan.

“The Arab and regional accusations leveled against Dahlan are a natural result of his interference in the internal affairs of countries in the region, his desire to remain outside the framework of Fatah, and his allegiance to non-Palestinian parties that have their own agendas, interests and plans that go against the Palestinian interest. The accusations Dahlan is facing [damage] his remaining chances in the Palestinian [political] arena, and there is no longer any room for reconciliation with President Mahmoud Abbas. His chances are doomed within Fatah.”

However, the results of a Feb. 11 opinion poll conducted by the Palestinian Center for Political and Survey Research in Ramallah challenge that assertion. The poll showed that if Abbas doesn't run in the next presidential election, Dahlan would rank third, as he got 6% of the votes in Palestinian territories, after Marwan Barghouti, the Fatah leader detained in an Israeli prison, and Hamas leader Ismail Haniyeh. While only 1% of poll participants supported Dahlan in the West Bank, 12% of Palestinians in the Gaza Strip supported him.

Bilal al-Shobaki, a political science professor at the University of Hebron, told Al-Monitor, “The Arab and regional accusations leveled against Dahlan will not deal a blow to his chances in the Palestinian arena, as he is backed by Egypt, Saudi Arabia and the UAE. Also, he has great financial capabilities and wide popularity. What’s more, Dahlan has his eyes set on a leadership position in the PLO, not in the [Abbas-led] PA. And his foreign relations are no different from other Palestinian leaders, who also have … regional roles that can raise questions. And despite these accusations, Palestinians are ready to welcome Dahlan as a leader.”

Of note, Turkey accuses Dahlan of communicating with Fethullah Gulen, a Turkish dissident cleric residing in the United States, to finance the failed coup against Erdogan in 2016 and of working against Turkish interests in Libya and Syria. This prompted Ankara to issue an international arrest warrant via Interpol in November 2019 and offer a bounty of $700,000 in return for information leading to his arrest. The next month, Turkey increased the bounty to $1.7 million.

In a Dec. 22 interview with Egyptian newspaper Al-Watan, Dahlan accused Erdogan of plotting to assassinate him, so the issuance of the Turkish arrest warrant against Dahlan in November was remarkable, as it came a few weeks ahead of Haniyeh’s visit to Turkey and his meeting with Erdogan. The visit seemed to be a clear message that Turkey welcomes Hamas and its leader, while it is legally pursuing Dahlan and seeking his arrest. This could hinder the rapprochement between Dahlan and Hamas in Gaza that began to emerge in mid-2017. This Dahlan-Hamas reconciliation has stirred Turkey’s anger since day one.

Said el-Haj, a Palestinian researcher in Turkish affairs, told Al-Monitor, “Turkey’s accusations against Dahlan go back to 2013, as Ankara does not consider him a Palestinian Fatah leader but an adviser to the UAE rulers and a tool used to carry out regional agendas against it.”

Turkey's openness to Abbas has increased in recent years, if only to confront the US Mideast peace plan and the relocation of the US Embassy to Jerusalem. Erdogan supports Abbas as a representative of the Palestinians, as Erdogan seeks to reject UAE attempts to impose an illegal leadership exemplified by Dahlan. Also, Turkey’s relations were lukewarm with Hamas in the wake of the movement’s rapprochement with Dahlan in Gaza, but Ankara subsequently realized that there was no alliance between the two but rather temporary interests.”

The recent regional accusations against Dahlan are the result of the UAE leading counterrevolutions aimed at undoing the Arab Spring and restoring Arab dictatorships. They are also the result of the UAE’s organized political and media campaign to undermine Turkey's regional stature. Dahlan is playing a huge role in this campaign.

Dahlan's Arab and regional influence is sometimes even bigger than his local Palestinian role. Most Palestinian leaders avoid playing such a big regional role for fear of any negative impact this might have on the Palestinian cause.