Sudan's military contingent in Yemen has been reduced to a symbolic presence as the main players in the Saudi-led coalition scale back their fighting. 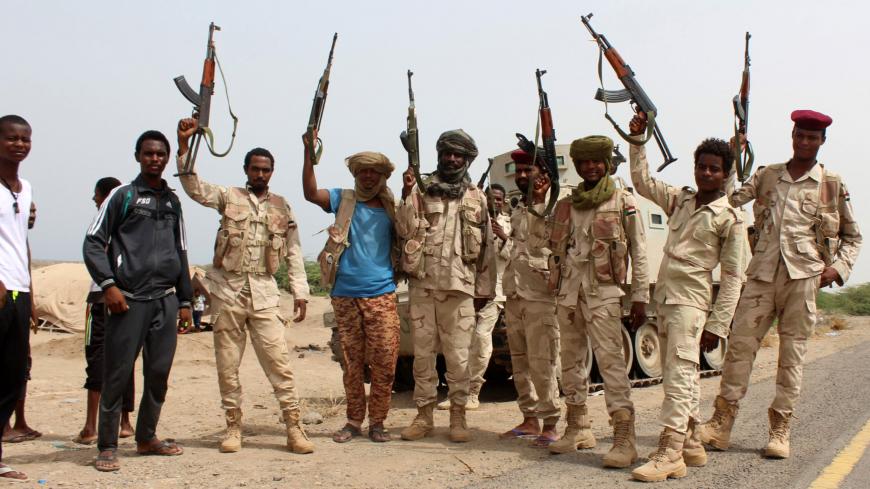 The decision earlier this month by Sudan to further slash the number of its troops deployed in Yemen came as no surprise. Jamal Juma Adam, spokesman for Sudan’s paramilitary Rapid Support Forces, informed news agencies on Jan. 14 that only 657 Sudanese soldiers remain in Yemen.

The estimated 30,000 soldiers deployed in Yemen in June as part of the Saudi-led Arab coalition fighting the Iranian-backed Houthis since March 2015 had been cut to some 15,000 in September and then to 5,000 in December.

Several factors have contributed to the drawdown. Among the first were the Sudanese uprising that began in December 2018, sparked by the high price of bread and general economic crisis. Months later, in April 2019, the military overthrew President Omar al-Bashir, who had held power for 30 years, but the protests continued, including pressure on the transitional military government to withdraw troops from Yemen.

In announcing the recent drawdown, Adam had remarked, “The Sudanese troops in Yemen had been operating in two sectors, the [United Arab Emirates] sector inside Aden, and the Saudi sector that extends along the Saudi-Yemeni border.” Exact figures are not available, but the Sudanese forces have reportedly suffered significant losses, with casualties estimated in the thousands.

Allied withdrawals and de-escalation in fighting also contributed to Khartoum's decision to scale back troops. According to Nabil Soufi, editor in chief of NewsYemen, in June the UAE withdrew an estimated 100 troops, which were replaced by forces from the secessionist Southern Transitional Council (STC), which the Emirates supports. Meanwhile, in November Saudi Arabia reduced confrontations on the battlefield and entered into Oman-mediated direct talks with the Houthis.

“There is almost a complete withdrawal of Sudanese troops,” said Soufis, who is close to the National Resistance Forces (also called the Joint Forces), which support the government of President Abed Rabbo Mansour Hadi. “All the Sudanese sites and camps have been handed over to the so-called Joint Forces established and trained by the UAE.”

After South Sudan seceded and declared independence in 2011, Sudan lost three-quarters of its oil production. The loss in revenue played a major role in prompting Khartoum to join the Saudi coalition in Yemen, in exchange for financial assistance, including debt relief. In addition, the Saudis have repeatedly promised to help Sudan in having US-imposed economic sanctions lifted and its name removed the list of state sponsors of terrorism.

Abdel Nasser al-Muadea, an independent writer and researcher, views the Sudanese troops as mercenary forces and does not believe their withdrawal will have a significant impact, given their already limited role.

“Sudanese troops in Yemen were support and protection forces used by the UAE forces to protect their headquarters in the southern regions and the west coast and to support the fighters in those areas,” Muadea told Al-Monitor. “The UAE withdrew from the west coast and most areas of the south. Accordingly, Sudanese forces no longer have a role there.”

Baraa Shiban, an independent researcher and political analyst, told Al-Monitor that there has been a clear desire among Arab coalition members to curtail their direct intervention. “Several indicators confirm this,” he told Al-Monitor, “most notably the talks in Oman since November between the Houthis and Saudi Arabia, the Riyadh agreement on Nov. 5 and the recent pullout of Sudanese forces.”

This, however, does not mean that the war in Yemen will soon conclude, as the proxy war will continue even as direct intervention winds down. While there are no statistics on the number of soldiers in Yemen trained and funded by Saudi Arabia, news reports from August estimated that UAE-backed STC forces numbered 90,000.

A Sudanese political source who spoke to Al-Monitor on the condition of anonymity, asserted, “There are Sudanese military forces operating outside the framework of the official forces whose names and numbers are listed in the records of the Ministry of Defense.” The source further explained that Khartoum had selected them through the ministry to fight, but not under the banner of the Sudanese Armed Forces.

There is at least one scenario in which Sudan might reverse gears and send more forces to Yemen without official announcement: if the negotiations between Saudi Arabia and the Houthis fail. In that case, the Sudanese Ministry of Defense will send more recruits, that is, mercenaries assembled from its own forces, to fight in the Saudi ranks, if Riyadh requests them.

Maintaining a symbolic presence of Sudanese forces in Yemen without specifying their tasks and positions could be due to the Saudis' lack of confidence in achieving a full-fledged peace with the Houthis. In short, they are needed to continue to give cover to the perpetuation of the Arab coalition's mission until Riyadh officially announces its conclusion.