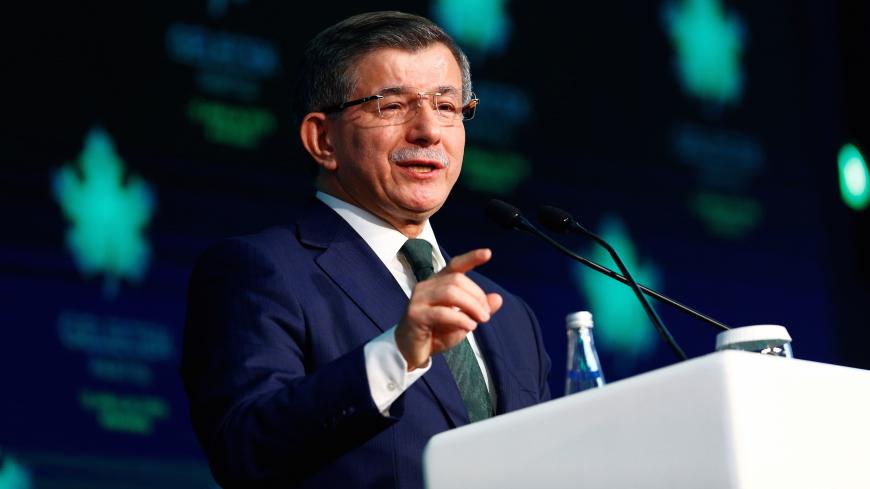 Former Turkish Prime Minister Ahmet Davutoglu has come under an increased amount of pressure since resigning from the nation’s ruling Justice and Development Party (AKP) last year to establish his own political movement.

On Jan. 21, Turkey’s General Directorate of Foundations took control of the Foundation for Sciences and Arts (BISAV), which Davutoglu co-founded in 1986 to support and bolster the nation’s conservative intellectual community.

"This arbitrary attitude is a grave step that could inflict great harm on our hundreds of years of foundation history and it is also a dangerous action that could affect not only the Foundation for Sciences and Arts, but all foundations in our country as well," read the Jan. 21 statement of Mustafa Ozel, a founding chair of the BISAV board of regents.

In response, the General Directorate of Foundations defended its appointment of three officials to oversee the management of BISAV, stating on its website: “This is not a trustee appointment. This action is to protect the legal character of the Foundation for Sciences and Arts, its tangible assets and establishment objectives.”

The move comes after Sehir University, another institution spearheaded by Davutoglu, was turned over to the state-run Marmara University in December due to financial issues cited by the Higher Education Board.

The latest polls place support for the former prime minister in the single digits, and observers believe his path to becoming a formidable threat to Erdogan’s leadership will face many obstacles, as evidenced by the swift takeover of two institutions central to Davutoglu’s conservative vision.

“This sends a message to the entire Islamist camp that if they try to go against the regime, there’s a price to pay,” Berk Esen, an assistant professor of international relations at Bilkent University in Ankara, told Al-Monitor.

He added, “[Erdogan] doesn’t want to leave any independent or autonomous space for people who are now trying to defect from his party and directly challenge him.”

The developments come as former deputy prime minister and economy czar under the AKP, Ali Babacan, is soon expected to establish his own breakaway party. The next election is not scheduled to take place until 2023, but defections from the ruling bloc or significant fluctuations in AKP support could trigger an early vote.

In the meantime, Davutoglu has sought to make a name for himself as an opposition candidate who can appeal to AKP supporters. He recently challenged President Erdogan to declare his personal and family-owned assets, and this week he claimed inflation figures were being manipulated.

Selim Koru, a Black Sea fellow at the Foreign Policy Research Institute, said Davutoglu has long been a central figure in Turkey’s conservative intellectual circles, and though he had influence at institutions like BISAV and Sehir University, “he didn’t really have a base beyond a small readership of Islamist and pan-Turkic romantics,” Koru told Al-Monitor.

Koru estimated that Davutoglu's reach was limited to a few hundred people in every Turkish city. He attended one of Davutoglu's lectures at BISAV in the late 2000s, when Davutoglu was an adviser to the Foreign Ministry, and remembers “everyone was very energized.”

Koru continued, “To my mind, that was peak Davutoglu. He knew how to make contact with impressionable minds and get them excited about the future. A lot of academics abroad were coming back to Turkey at the time, and BISAV and Sehir University were attractive places for them. Liberal yet imbued with the seriousness that conservatism brings.”

After the state takeover of both institutions, Koru said he expected the administrations there to be replaced with people who do not directly oppose the AKP government.

According to Esen, Erdogan has maintained political dominance over the decades, at least in part by polarizing various blocs of Turkish society to consolidate his conservative nationalist base. He noted that the presence of a conservative alternative, however small, could complicate Erdogan’s campaign tactics moving forward.

Reflecting on the mounting state pressure Davutoglu has faced since establishing his party, Esen said, “I think much of it is a strategic calculation … and there’s a slight personal vendetta.”