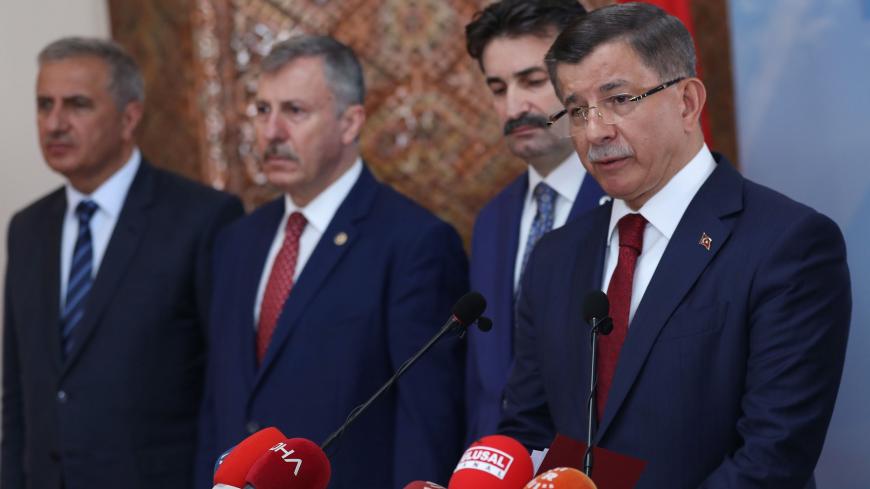 Former Turkish Prime Minister Ahmet Davutoglu (R) holds a press conference at his home in Ankara on Sept. 13, 2019, to announce he will launch a "new political movement" in the latest challenge to President Recep Tayyip Erdogan from his former allies. - ADEM ALTAN/AFP via Getty Images

Named Gelecek Partisi, or Future Party, Davutoglu will be joined by a group of to-be-disclosed founding members to announce his manifesto, which is expected to target center-right swing voters seeking an alternative to President Recep Tayyip Erdogan’s ruling Justice and Development Party (AKP).

According to Future Party spokesperson Abdullah Adabas, Davutoglu will outline his party policies Friday in preparation for elections currently scheduled for 2023. Rumors have been circulating over the party’s formation since September, when Davutoglu resigned from the AKP, with which he served as minister of foreign affairs and then prime minister from 2014 to 2016 before falling out with Erdogan.

The former premier has criticized AKP policies in recent months and took formal steps Thursday in submitting his party application to the Interior Ministry. Along with former Economy Minister Ali Babacan, who is also expected to form a new party in the coming weeks, Davutoglu may draw votes away from the traditional AKP electorate, but will face an uphill climb in becoming a significant threat to Erdogan’s hold on power, according to political observers.

“The main criticism leveled against [Davutoglu] is he had turned a blind eye to the democratic backsliding that happened in the country partly under his watch,” Berk Esen, an assistant professor at Ankara’s Bilkent University, told Al-Monitor. “The fact that now he’s challenging Erdogan, it seems for many people disingenuous.”

Davutoglu, 60, held key positions in the AKP as the 2011 Arab Spring led to regional instability, wars and mass displacements that affect Turkey to this day. Political opponents have long criticized his “zero problems with neighbors” slogan as Ankara became increasingly isolated in the region, partly due to its backing of Syrian opposition forces and Muslim Brotherhood-linked movements elsewhere in the Middle East.

While his foreign policy record remains subject to debate, Davutoglu is expected to campaign on his clean reputation and his distance from alleged corruption scandals that have marred other long-time political players in Turkey.

The Future Party “is going to be a cleaner, more authentic AKP, sort of an AKP 2.0,” Esen told Al-Monitor. “It could draw voters away from the AKP. I don’t know by how much, probably not a significant share, but given how tight the AKP's winning margin is, even one or two percentage points of a swing from AKP to other parties would mean disaster for the AKP structure and even, to an extent, for Erdogan.”

In an apparent effort to mar Davutoglu’s image, Erdogan has accused him and Babacan of bank fraud through financial dealings linked to Istanbul Sehir University. The former premier was a founding member of the institution, which has been unable to pay back a $72 million loan and has since had its assets frozen by a Turkish court. Davutoglu denied the accusation, challenging Erdogan and his family to declare their assets. Babacan has yet to comment on the matter.

“The Sehir University controversy showed Erdogan is extremely concerned about these two movements because he feels the votes will come out of the AKP and I thought it was impressive that Davutoglu punched back so hard,” Alan Makovsky, a senior fellow at the Washington-based Center for American Progress, told Al-Monitor, noting that the altercation plays into Davutoglu’s projection of incorruptibility.

“But Davutoglu starts off way down in the polls,” Makovsky continued. “It’s not going to be easy for him to become a political force.”

Among Davutoglu’s other challenges are his low appeal with Turkey’s Kurdish voters following his “hard-line” support for military operations in the nation’s southeast between 2015 and 2016, said Soner Cagaptay, director of the Turkish Research Program at the Washington Institute for Near East Policy.

Most likely, Cagaptay said, the Future Party will seek to sway center-right-leaning voters disillusioned with the AKP’s management of an ongoing economic downturn and Erdogan’s consolidation of power.

“Erdogan has two kinds of voters: those who love him, adore him and will vote for him regardless, nearly a third of the electorate,” Cagaptay told Al-Monitor. “And then there are swing AKP voters, maybe about 15% of the population … and those voters, I think, are easily peelable, which was Meral Aksener’s dream when she set up her party,” he said, referring to the nationalist Iyi Party established in 2017.

In getting out his message, Davutoglu may also face limited access to Turkish media outlets, which are overwhelmingly pro-government after years of consolidation and state pressure on opposition voices. The same disadvantage may apply to foreign media. The Russian-financed Sputnik Turkish-language news service aired an interview with Davutoglu earlier this year, leading to the dismissal of three Turkish journalists involved in the program.

“There was a time when Davutoglu was prime minister and Erdogan took much of the independent media under his control,” Cagaptay told Al-Monitor. “Perhaps he has unwittingly created the circumstances that will prevent his successful launch.”