The Turkish military’s pension fund, OYAK, has embarked on a major expansion, taking advantage of business opportunities amidst the country’s economic crisis. But how long will Recep Tayyip Erdogan’s acquiescence last? 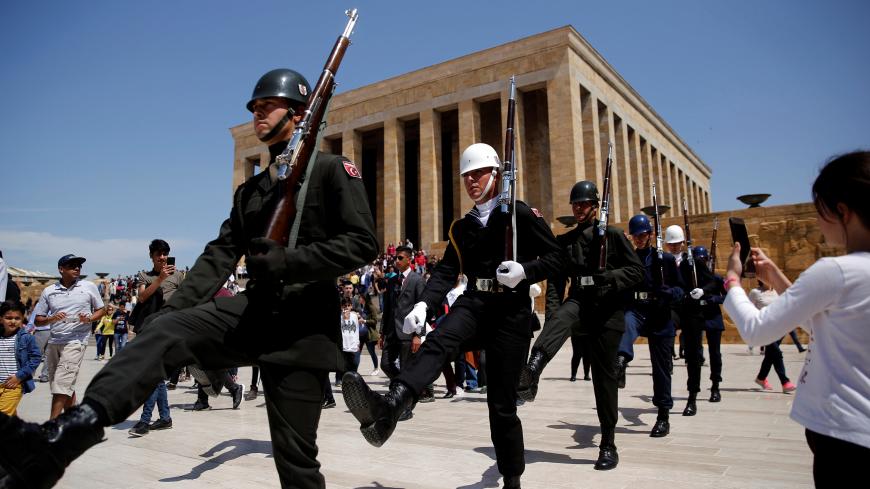 While many companies are scrambling to stay afloat amid Turkey’s economic crisis, the Turkish military’s pension fund, OYAK, is poised for a major acquisition in the fuel distribution sector, a move that reflects its growing economic might and influence in critical sectors. The fund, which entered talks to buy the fuel and autogas operations of Demiroren Holding in November, has agreed to pay about $450 million for the Turkish branch of Total Oil and M Oil, which are currently part of Demiroren, a financially strained conglomerate close to the government. Under the agreement, reported by the daily Haberturk last week, OYAK would pay some $360 million and $90 million respectively for Total Oil and M Oil, which are operating about 900 gas stations across the country.

OYAK’s economic operations have often come under fire under the Justice and Development Party (AKP), which has actively sought to undo the political clout of the Turkish military. Intriguingly, however, President Recep Tayyip Erdogan has refrained from undoing the fund’s economic autonomy, even in the aftermath of the botched coup attempt in July 2016, which saw the upending of various military institutions.

OYAK is Turkey’s largest pension fund, serving also as a credit aid fund, which all officers and noncommissioned officers (NCOs) of the Turkish military are obliged to join. About 10% of the monthly salaries of 250,000 OYAK members are automatically deducted as contributions to the fund, generating a monthly cash flow of around $35 million. This has made OYAK one of the biggest domestic investor holdings in Turkey, which has been in the grips of major economic woes since last year.

Although junior officers are generally unhappy with the compulsory reduction in their disposable incomes, they realize how beneficial it could be as their retirement age approaches. OYAK members are entitled to a substantial retirement bonus from the fund, in addition to their regular retirement benefits from the state pension fund. For example, a four-star general with 40 years of service gets about $150,000 retirement bonus from OYAK, while a colonel with a 30-year-service gets $100,000 and an NCO about $70,000.

OYAK is a major player with multibillion-dollar investments in various sectors such as iron, steel and cement manufacturing, car making, construction, mining, energy, finance, chemicals, logistics services and seaport management. In some fields, it has even grown into a dominant force. OYAK enterprises contribute 25% of Turkey’s industrial steel production and control 20% of the car-making industry in the country. Standing out among them are the iron and steel factories in Eregli and Iskenderun and the Renault OYAK plants in Bursa. The fund’s cement plants also make a significant contribution to the national economy. More than 32,000 people are employed in OYAK’s 60 companies, which operate in 21 countries. As of 2015, OYAK’s total economic worth was estimated at $25 billion, with exports reaching $4.7 billion in 2018. All those figures show that OYAK is not merely a credit union for Turkish military personnel, but also a bulky, powerful and prospering conglomerate in the Turkish economy.

After the AKP came to power in 2002, critics often lashed out at OYAK, urging the military to stay out of both politics and the economy. AKP elites slammed OYAK’s investments and acquisitions, arguing that the fund’s economic clout stood in the way of democratic civilian oversight of the army and compounded the military’s political tutelage.

After the 2016 coup attempt, the government embarked on a vengeful campaign to dismantle an array of military institutions. Many believed that OYAK, too, was on the line, facing the fate of companies linked to the Gulenist network, which Ankara held responsible for the putsch. In other words, they expected the government to seize OYAK companies and then dissolve them or hand them over to businesses close to the AKP. Yet this scenario did not materialize. Erdogan’s government kept OYAK intact. Its only move was to remove old managers and replace them with civilian figures close to the government. Remarkably, OYAK’s economic autonomy was respected and the fund was kept aloof from the political controversies that simmered in the wake of the putsch.

Why was OYAK spared? Two main reasons appear to have helped the fund survive.

First, the aftermath of the coup attempt saw Erdogan seek an alliance with the military following massive purges of soldiers suspected of Gulenist links. OYAK is a major symbol of this new understanding, being an entity that bears directly on the economic interests, morale and motivation of 250,000 soldiers on active duty and employs the majority of retired generals, either as regular staff or on a contractual basis. Erdogan’s reliance on the army has increased in the past several years, both in terms of anti-terror efforts at home and military operations abroad, which has kept him from targeting OYAK and thus antagonizing the military.

The second factor is economic. Erdogan’s government is grappling with serious financial woes amid plunging foreign investments, a recession in the construction sector — which was the engine of economic growth in previous years — and waning resources to distribute to court political support.

OYAK, for its part, has been seeking strategic investments to turn the crisis into an opportunity. Targeting the fund in the current environment would be akin to killing the goose that lays golden eggs. Thus, Erdogan seems to have no interest in going after OYAK at present. Moreover, OYAK, which is not fully politicized yet and remains under rational management observing free-market conditions, could function as a sort of wreck cleaner, rescuing the troubled investments of companies close to Erdogan. Hence, the significance of OYAK’s acquisition of the two Demiroren companies.

The handover would place OYAK among the five largest players in the fuel distribution and engine oil sector, with a market share of 8% and some 150,000 employees. Fuel distribution is a very profitable sector in Turkey that directly affects over 30 other main sectors. Demiroren had bought the Turkish branch of Total Oil in 2015 for 325 million euros ($358.3 million).

Another sector on OYAK’s radar is the defense industry, namely the production of armor steel for mine-resistant vehicles and the Altay tank. Turkey’s foreign reliance in this critical area is as much as about 90%. Finnish and US manufacturers have been the main armor steel suppliers of Turkish companies, but this collaboration has hit trouble amid international reactions over Operation Peace Spring, which Turkey launched in early October in northeastern Syria. Also, the United States is said to be considering a steel embargo for Turkish companies. In August, Ataer Holding, an OYAK subsidiary, entered talks to acquire British Steel, the United Kingdom’s No. 2 steelmaker, but the effort was unsuccessful.

Nevertheless, OYAK’s rise and acquisitions in key sectors of the Turkish economy are bound to continue. Intriguingly, this will draw the Turkish military further into the economy. OYAK’s increasing visibility and clout in critical sectors such as the defense industry and energy will, no doubt, irk the big conglomerates close to Erdogan. Will Erdogan continue to acquiesce to OYAK’s rise to keep the military by his side? Or will he lend an ear to the grumbles and move to curb OYAK’s growth? How Erdogan answers these questions in the coming months will bear not only on the economy but also on the president’s relationship with the military.