After a Turkish government spokesman condemned the killing of overpopulated camels in Australia, critics pointed out the ruling party's record has been anything but friendly to the environment and animal rights. 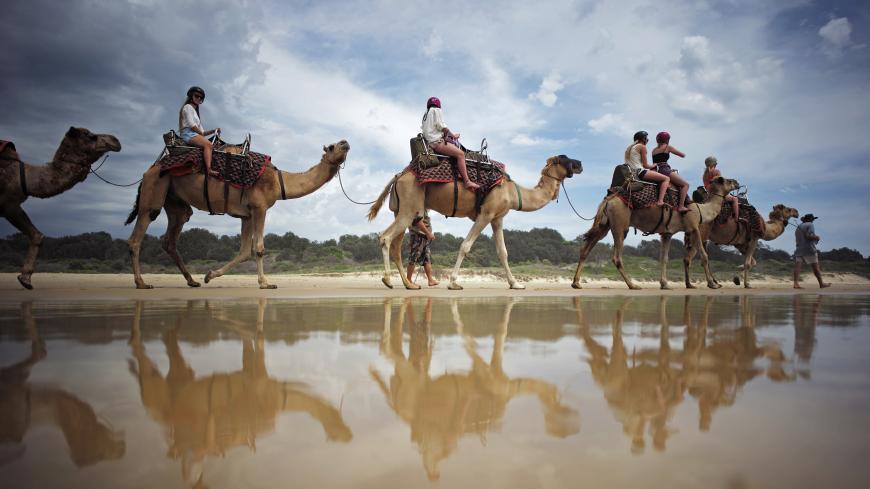 Tourists are reflected in the waters of the Pacific Ocean as they ride on a camel safari along Lighthouse Beach, north of Sydney, Australia, Dec. 4, 2014. - REUTERS/Jason Reed

Turkey’s government has been bitterly criticized for a systematic disregard for nature during its more than 17 years in power. Its multi-billion-dollar vanity projects, including Istanbul’s newly opened third airport and controversial plans for the so-called "crazy canal" duplicating the Bosporus, are decried for their horrific environmental costs. So it came as something of a surprise when the spokesman for the ruling Justice and Development Party (AKP), Omer Celik, took to Twitter today to air his outrage over Australia’s culling of camels.

Celik lambasted the move in a seven-tweet thread, saying, “We are deeply concerned at news that Australia will be shooting dead as many as 10,000 camels and call upon the Australian government to find a different solution. To kill thousands of camels in the belief that it will restore nature’s equilibrium and preserve water sources is not a humane approach."

Australian authorities began shooting the beasts on Wednesday in southern Australia, where Aboriginal communities suffering from chronic drought have reported large camel herds rampaging through towns as they seek water. The mass slaughter, which is to last five days, is not directly linked to the country’s deadly bush fires, the authorities said.

Celik’s tirade will have heartened Turkey’s swelling legion of animal defenders, but it left some observers scratching their heads. The AKP, a pro-Islamic party, occasionally makes positive noises about animal rights but it has never prioritized them. Draft legislation introducing stiffer penalties for animal cruelty, including abandoning and raping them, has been languishing in the AKP-dominated parliament.

President Recep Tayyip Erdogan’s wife Emine has called for the law to be expedited. In an Oct. 4 Instagram post marking World Animal Rights Day, the first lady shared pictures of Pasha, an Anatolian shepherd mix saying, “I wish for the animal rights bill to be adopted as soon as possible and for animals to be shielded from all evil and to be allowed to live in their natural habitats with all their needs attended to.” The stray was found as a puppy wandering the 1,100-room presidential palace while it was still under construction (around 10,000 trees were cut to make room for it) and is being cared for by Erdogan’s staff.

Celik made no mention of the bill in his tweets. “Nor has he uttered a word about the hundreds of thousands of animals that perished in the bush fires,” said Ayse Cavdar, an anthropologist who has closely studied Islamist dynamics in Turkey. “The camel is a symbol in Islam. The apparent sensitivity stems from this, I guess,” she told Al-Monitor. Celik, counted among the oldest and most trusted of Turkish President Recep Tayyip Erdogan’s lieutenants, “prides himself on keeping the pulse of the people. It's an example of banal populism.”

“Has Celik’s account been hacked?” asked a pious opposition lawmaker, commenting on the condition that he not be identified by name. He noted, however, “The average Muslim is environmentally friendly and and shows solidarity with fellow creatures. In that sense, Celik’s words are Muslim in approach but do not match his party’s deeds.”

Levent Gultekin, a prominent conservative intellectual who has emerged as one of the fiercest critics of political Islam, said Islamic sensibilities in and of themselves fail to adequately explain Celik’s outburst. “The camel carried our prophet on its back and as such has a place in Islamic lore, but that’s it,” he told Al-Monitor.

The camel, which is popularly associated with Arabs and the Middle East in general, is mentioned in collected sayings attributed to the Prophet Muhammad, known as the the Hadith. Brannon M. Wheeler, a renowned expert of Quranic manuscripts, wrote in a paper, “Gift of the Body in Islam: The Prophet Muhammed’s Camel Sacrifice and Distribution of Hair and Nails at his Farewell Pilgrimage,” “In both pre-Islamic and Islamic times it is clear that the camel was the preferred animal of sacrifice at the Meccan sanctuary.”

With this in mind, Turkey’s largest pro-Islamic relief charity, the Humanitarian Relief Foundation (IHH), suggested via Twitter that the meat of the camels being culled in Australia be distributed to the needy. IHH official Osman Atalay told Al-Monitor, “It's an idea. The meat could be given to the poor in Africa. It could be refrigerated and transported.” Atalay admitted that the animals being shot dead by snipers posed a problem for Muslims, who only eat halal products. “But Christians could consume it,” he said.