Syrian children who lost their parents during the war are forced to work in difficult conditions to care for their struggling families. 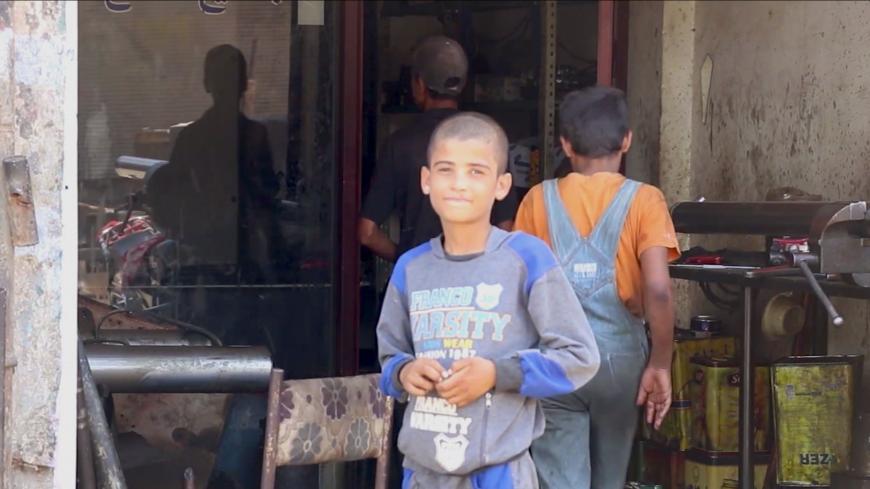 Boys work in a garage in al-Shaddadi, Syria, seen in a still from a video uploaded Sept. 24, 2019. - YouTube/North Press Agency

AL-SHADDADI, Syria — Nine years into the Syrian war, child labor has seriously increased in al-Shaddadi in northeastern Syria, as well as in several other cities of Al-Jazira region, where children work long hours amid miserable and exploitative conditions.

Sohaib Jaber, 13, sets up his spices in the early morning hours on the sidewalk in front of a barbershop. He'll stay there for around 10 hours straight, selling bags of the seasonings to feed his family.

He tells Al-Monitor he became the sole breadwinner for his mother and three brothers after his father was killed by the Islamic State (IS) when it occupied the city in May 2014. Jaber is one of hundreds of Syrian children who lost parents during the Syrian conflict; many were forced to drop out of school and look for jobs so they and their families could survive.

Two streets down from where Jaber works, Mohammed Hussein, 14, stands behind a grill in a restaurant. He's held several jobs over the past five years. Working for long hours at the restaurant is exhausting, he tells Al-Monitor. His shift begins at 8 in the morning and ends at 7 in the evening.

He spends his days behind the grill, in addition to washing the dishes and cleaning, earning 5,000 Syrian pounds (roughly $5) a week.

Ounoud, his grandmother, tells Al-Monitor she feels sorry that Hussein has to support her and his brothers. IS kidnapped his father, who is still missing, and his mother married another man and left the family, she says.

“I don't know what I would have done if it were not for the money my grandson brings home. Although it might seem like nothing, it covers some of our basic needs, and he gets some meals from the restaurant so we save on food,” she says.

Hussein misses going to school but feels it's impossible for him to go back again after dropping out. He didn't even finish primary school, and students his age are now in middle school.

An activist in the Doz children’s organization in the city of Hasakah told Al-Monitor on condition of anonymity that the percentage of children working jobs beyond their physical strength is high. Employers exploit them in the absence of child care from any official or charitable body, the activist said, and there are no specific statistics on the number of underage children currently working in the area.

“The repercussions of war, particularly the economic conditions, play a major role" in the increase in child labor, she said, adding, "So did IS’ control of the area and the educational process.”

She said some parents tell their children to work instead of going to school. The majority of jobs are tiring and arduous and don't suit the children’s weak physiques. Some work in car repair or in transporting and unloading goods, all jobs that require great physical strength. This affects their health and education, costing them their futures.

Although schools have reopened since the US-backed Syrian Democratic Forces expelled IS from the area in August 2018, the illiteracy rate among children has increased.

Khalil Khodr, a member of al-Shaddadi’s city council, told Al-Monitor that when IS controlled the city, it arrested and killed civilians and closed down civil schools to open ones serving its extremist ideology.

“Many families lost their sole breadwinner, some of whom were arrested or executed by IS. Others are still unaccounted for to this day. Children had to bear the responsibility of caring for the family,” he said.

"Some families were so afraid their children would learn IS’ extremist ideology, since the group controlled the educational process, that they prevented them from attending school. Instead, they preferred that their children work in jobs that exceed their physical abilities or kept them at home, which increased the rate of child labor in the city, so the illiteracy rate increased with it. We still have no accurate numbers in this regard," he added.

Speaking about the difficulty in dealing with these problems, Khodr said, “We can't prevent children from working. Those whose families depend on them to secure their livelihoods can't be forced to attend school, and many of them are late in the educational stages compared to their peers who are still studying.”

In a mid-January report, the UN's Independent International Commission of Inquiry on the Syrian Arab Republic warned of the horrific situation in education. The report, titled “They Have Erased the Dreams of My Children," highlighted the flagrant violations of the Syrian war against the basic rights of children. The report revealed that thousands of schools were destroyed or used for military purposes, and more than 2.1 million children of both genders were deprived of school.

“Working children are exposed to danger and to physical, psychological and financial exploitation, among other [difficulties], as they acquire bad habits and behaviors, and uncommon relationships,” he told Al-Monitor, noting the impact of their work on their social and health status, as their situation could turn into a real catastrophe in the near future.

Othman stressed the need for all sectors to design joint programs aimed at reducing this phenomenon.