Hamas has stepped up its meetings with US and EU officials in an attempt to break its isolation and emerge on the international diplomatic scene. 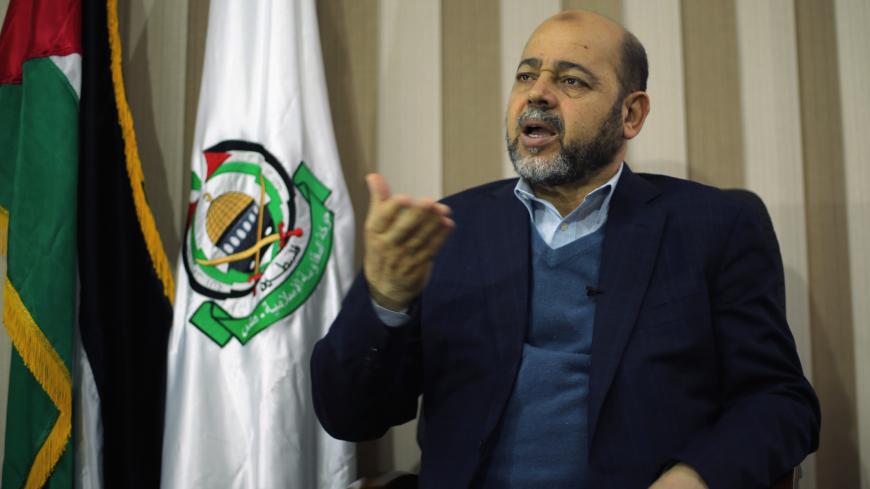 The Israeli Public Broadcasting Corporation reported Dec. 31 that Hamas has intensified its meetings with European and US officials in a bid to break its international political isolation and open new channels of communication with the West.

A meeting was held in Doha between former Hamas leader Khaled Meshaal and Robert Malley, president of the International Crisis Group (ICG) in Washington, who served as Middle East special adviser to President Barack Obama. This was not the first meeting between the two men.

During some of the meetings, the parties discussed the possibility of future international recognition of Hamas. While some EU officials requested that Hamas maintain contact with the EU and the United States, the Palestinian Authority (PA) expressed concerns that the international community might open up to the Islamic movement, according to the Israeli broadcaster.

Bassem Naim, a member of Hamas' international relations office, told Al-Monitor, “The Doha meetings are part of frequent meetings that Hamas has been holding from time to time at various leadership levels with European and Western delegations to discuss Palestinian and regional issues, including the Gaza blockade, the Palestinian elections and the Great Return marches. Hamas has requested that those officials pressure Israel into allowing humanitarian facilities and aid into Gaza, in order to prevent the explosion of the situation.”

He continued, “Any communication between Hamas and the international community, regardless of its level or the stakeholders involved, is aimed at breaking its political isolation and to pave the road for developing the movement’s international relations to serve and advance the Palestinian cause.”

Hamas believes the ICG can play a positive role in helping it integrate into the international system and breaking its political isolation.

The ICG stated in a 2014 report that Israel's harsh policies and punitive economic measures contributed to the increased influence of Hamas in the Gaza Strip and helped advance its goal of dominating the Palestinian political scene. The report was widely disseminated among Hamas officials, who considered it the beginning of its transition from the local to the international arena, as the ICG praised the movement's strengths and pointed out the PA's failures.

The ICG has since issued statements calling for dialogue with Hamas.

A former ICG official told Al-Monitor, “The Doha meeting with Meshaal was not the first meeting between Hamas and the ICG. These meetings take place in and outside the Palestinian territories with medium- and high-level Hamas officials to gauge their positions and policies vis-a-vis any development to convey messages to the European decision-makers.”

The source, who spoke on condition of anonymity, added, “Malley is more inclined toward the Democratic Party in the US, and not the current US administration that refuses to hold dialogue with Hamas and adopts the Israeli hostile stance against the Islamic movement.”

According to sources from within Hamas, Hamas has held additional meetings with Western ambassadors and UN envoys following the talks with Malley. The sources did not specify the exact locations or dates of the meetings.

The movement, however, has to abide by the Quartet’s conditions, including the recognition of Israel and the renunciation of violence. These prerequisites could curb Hamas' efforts to break through into international diplomacy, not to mention the group's classification as a terrorist group by the EU and United States.

Ghazi Hamad, the former undersecretary of the Ministry of Foreign Affairs in Gaza, told Al-Monitor, “It is premature to speak about a political breakthrough for Hamas in the West. The many meetings I have arranged were basically with Western officials who are not part of the decision-making process. The fact that these meetings, however, have been recurring means that the international political isolation on Hamas has failed.”

The European and US dialogue with Hamas coincides with recent talks about local, regional and international efforts for a long-term truce between Israel and Hamas in Gaza.

The PA’s concern to this effect is warranted, as its relations with Israel, the United States and some European countries has deteriorated, and its tensions with several Arab countries, such as the United Arab Emirates and Saudi Arabia, continue.

Ghassan al-Khatib, the former Palestinian minister of planning in the PA, told Al-Monitor, “The international community is trying to entice Hamas into a long-term truce with Israel in exchange for more international openness toward the movement and expanding its foreign relations.”

“Hamas seeks to be internationally recognized as an authority in the Gaza Strip. However, it seems very far-fetched to me that the US or France would agree to start talks with Hamas without prior understanding with Israel,” Khatib added.

“The PA has repeatedly stressed on limiting the dealing with Palestinians through it as it is the official and legitimate authority in the Palestinian territories,” he concluded.