Prime Minister Benjamin Netanyahu prefers that Israel’s growing deficit will not come up on the March election agenda. 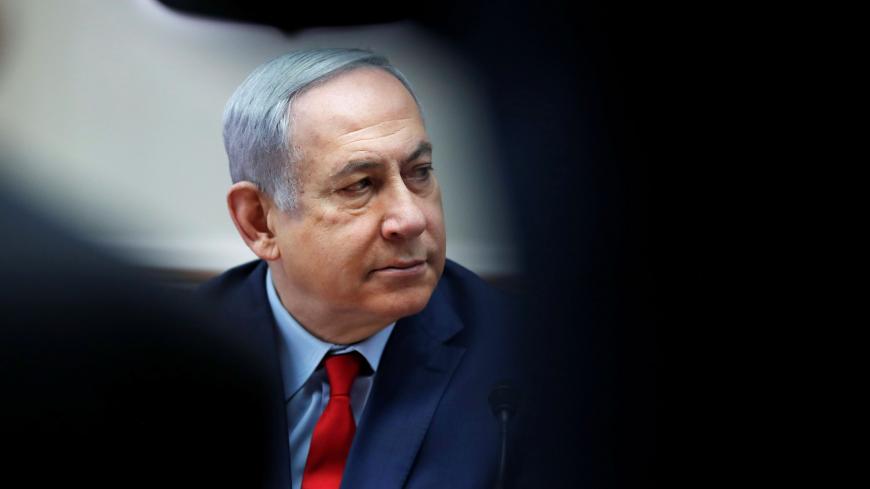 Israelis came in for two pieces of bad news this week. The first emanated from the Finance Ministry, whose people reported at the weekly Cabinet meeting Jan. 12 on the government’s resounding failure in protecting the public kitty. According to a forecast by the ministry’s economists, the 2021 budget deficit would reach 4.2% of the gross domestic product (GDP). Two days later, on Jan. 14, the media reported on the annual assessment by the Israel Defense Forces Military Intelligence Directorate, presented recently to top political echelons, which described a crushing strategic defeat. The intelligence analysts expect Iran to have sufficient enriched uranium by the end of 2020 to manufacture one nuclear bomb, and a nuclear warhead a year later.

Prime Minister Benjamin Netanyahu was quick to reassure the public, saying, “I reiterate — Israel will not allow Iran to achieve nuclear weapons.” He also took advantage of the opportunity to call on the West to expand economic sanctions on Iran. Netanyahu has presumably been updated on the refusal by European states, and by Russia and China, of course, to follow in the footsteps of his friend in the White House regarding tougher economic pressure on Iran. So how does the candidate for the premiership (Netanyahu) intend to prevent Iran from completing its nuclear program by the end of the year? Does the citizenry not have a basic right to know whether Israel is headed for all-out war, one expected to cost the lives of thousands of people in Israel’s unprotected heartland?

The prime minister’s cavalier reaction to the military experts’ troubling assessment precludes any public or political discussion of the Iranian nuclear policy, which he himself shaped and implemented. The ambiguity behind which he hides allows him to evade responsibility for Iran’s decision to violate the 2015 nuclear agreement with world powers. The reason for Iran’s move and its timing are directly linked to the 2018 decision by President Donald Trump to pull the United States out of the agreement, a crucial measure for which Netanyahu has taken credit. Now it is up to Netanyahu to assume responsibility and publicly explain how he intends to deal with its outcome. If he keeps running away, the opposition must hold his feet to the fire at the ballot box on March 2.

Netanyahu is dealing with news of the deficit in the manner he likes best — storming the messenger. The prime minister and the chorus of his ministers disputed the projection and attacked the Finance Ministry officials who presented it. They “forgot” that the forecast prepared by the Bank of Israel put the deficit even higher than the Treasury did. According to a December 2019 projection by the governor of the central bank, professor Amir Yaron, 2021 would end with a 4.5% deficit and by 2025, the shortfall would range from 4.7% to 5.2% of the GDP if left untreated. How does Netanyahu handle this significant gap? He cuts short the discussion, and he can always pass the buck to Finance Minister Moshe Kahlon.

When Netanyahu forms his governments, he always has good reason to give the finance minister’s job to enemies from within — such as former Finance Minister Sylvan Shalom of the Likud — or from other parties — such as Yair Lapid of Yesh Atid and Kahlon, formerly of the Kulanu party — to ensure he has handy scapegoats. Netanyahu also has excellent reason to want the deficit issue to go away. “Netanyahu was the most ideologically minded politician who ever held the finance minister’s position,” said economist Avichai Snir, referring to Netanyahu’s Treasury term from 2003 to 2005. “His ideology was to slash government spending” in order to energize the business sector, as Netanyahu famously explained when he likened the private sector to a thin man lugging around a fat man. Speaking with Al-Monitor, the Bar-Ilan University and Netanya College lecturer recalled that in order to implement deep spending cuts at the time, Finance Minister Netanyahu pushed through legislation capping the annual budget growth at 1% and fought valiantly for the deficit target to be as low as possible.

However, when the economists predicted a 2021 deficit in excess of 4% — which would force the next government to carry out deep budget cuts and/or raise taxes — Netanyahu dubbed them a bunch of pessimists. According to the counterassessment he presented, the deficit would “only” come to 3% or 3.3%, and would thus not necessitate cuts in public services and/or erosion of voters’ salaries. This discrepancy also presents the opposition with a challenge. The Blue and White party must expose the bitter failure of “Mr. Economy” Netanyahu and lay out a realistic economic recovery blueprint, without hiding the price it will exact from the public. The Finance Ministry estimates that cuts of over 30 billion Israeli shekels ($8.7 billion) will be required in 2021 to reduce the deficit.

The conversation with Snir leads to a junction where the bad news on the deficit and on Iran could result in a fatal collision. Snir argues that a deficit that slightly exceeds the target and a 1%-2% growth in government debt is not such a terrible development. However, he notes that this is the second year if not the third year in which the deficit exceeds the 2.9% target. Israel’s debt is still far lower than that of most developed countries, such as the United States, France and Greece. Nonetheless, Israel is located in one of the least stable parts of the world and therefore a deficit and debt growth incurred during times of economic prosperity such as today’s could turn into an unbearable burden in times of war.

Netanyahu has earned a reputation as an undisputed expert in turning a lemon into lemonade. We can assume that in the coming weeks, he will add the Military Intelligence officers and the Finance Ministry and Bank of Israel economists to his long list of “deep state/leftist/sourpusses.” There is still a little room left next to the police investigators, state prosecutors and the media already dubbed as such. It is far easier and more pleasant to kill the messengers than to admit failures and propose realistic solutions.