Iraqi protesters are seeking protection from the United Nations against the violence against them. 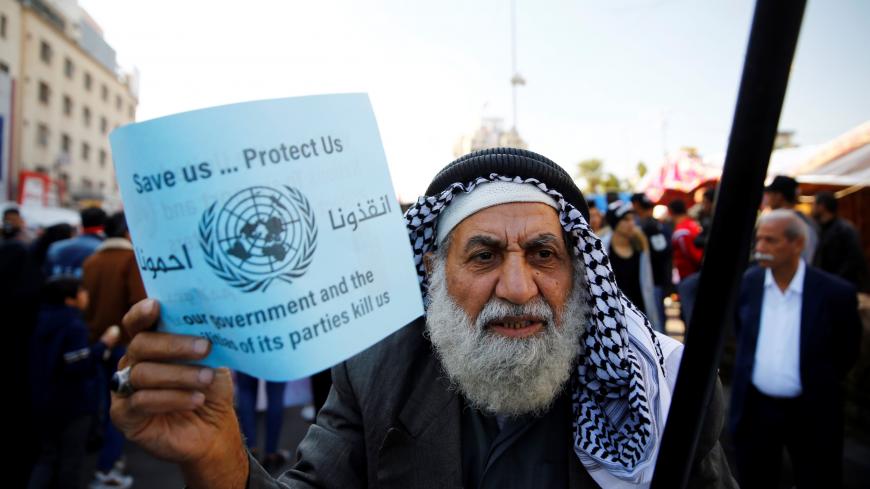 Iraqi protesters are seeking greater international attention to both their cause and attacks by security forces and armed groups, even at one point displaying a large United Nations flag at the Turkish restaurant at Tahrir Square; the restaurant was seized Feb. 1 by supporters of populist cleric Muqtada al-Sadr.

Protests started in early October in a bid to bring about political change in the country. On Jan. 28, the logo of the international organization was raised, a day after demonstrators circulated posters in Tahrir Square calling for the UN to intervene to protect them from excessive violence.

Demonstrators accuse the government and Iran-backed armed factions close to it of resorting to violence, including firing live bullets and deadly tear gas canisters at protesters; these have killed and wounded a large number of those protesting.

Iraqi official authorities have denied issuing any orders to use violence or to fire live bullets on protesters. They blamed a “third party” they did not reveal and said they are officially investigating the matter.

Protesters' tents have also been set ablaze at night in the provinces of Baghdad, Basra and Dhi Qar.

Amnesty International reported that more than 600 people have been killed since early October as a result of civil demonstrations and sit-ins taking place in 11 provinces in central and southern Iraq.

The Iraqi High Commission for Human Rights, a quasi-governmental organization, reported that on Jan. 26, 12 people were killed in the provinces of Baghdad and Dhi Qar and that 230 were reported injured, including protesters and government security forces.

The military spokesman for Adel Abdul Mahdi, who became a caretaker prime minister after resigning in November, provided a lower number of casualties. However, President Barham Salih corroborated the numbers issued by international organizations.

The UN is not that popular among protesters, and less so after the UN secretary-general's special representative for Iraq, Jeanine Hennis-Plasschaert, welcomed the Feb. 1 naming of Mohammed Tawfiq Allawi to be prime minister.

On Jan. 27, in the wake of escalating violence, the embassies of 16 countries in Iraq issued a joint statement condemning the “excessive and deadly use of force against peaceful demonstrators” by Iraqi government forces and armed factions. The statement included ambassadors of countries that have influence in the UN Security Council, such as the United States, Germany, Canada, Britain, Spain and Italy. This is the first time that so many countries have joined forces to condemn the violence against Iraqi demonstrators.

On Jan. 30, the UN Assistance Mission in Iraq issued a strongly worded statement in which it repeated its condemnation of the use of violence against demonstrators, saying “the continued loss of young lives and the daily bloodshed are intolerable.”

The UN statement, which was widely circulated in the media, provided numbers of victims of protests that were lower than those declared by humanitarian organizations.

The UN mission's statement said, “Preliminary information points to the use of live ammunition and the impact of tear gas canisters as the chief cause of death, while additional injuries occurred as a result of security forces beating demonstrators with sticks.”

In addition to the violence that is being used against protesters in protest and sit-in squares, a number of influential activists, bloggers and journalists are also being pursued.

The High Commission for Human Rights in Iraq documented “49 cases of attempted assassinations and 72 abduction attempts involving protesters, activists, and bloggers since the first day of the demonstrations.”

In a statement distributed to the media Jan. 29, the commission said it had documented “50 assault cases against journalists, through beating, threatening, inhaling tear gas, attacking many satellite channels, breaking equipment and preventing media workers from playing their role in covering the demonstrations.”

The embassies of the 16 countries, the UN and several human rights organizations have all pointed out that armed factions were involved in the assault on protesters.

The Popular Mobilization Units, which include most of the armed factions in Iraq, have denied responsibility for the violence used against demonstrators.

The violent methods used against protesters are leading protesters to lose confidence in the official authorities or any other government agency when it comes to protecting them. This sentiment led protesters to repeatedly chant slogans calling for their protection internationally and for the Security Council to take measures against the government and Iraqi groups for using excessive violence.

Al-Monitor made five attempts to reach Iraqi government spokesman Saad al-Hadithi to ask for the government’s response to the recent international statements, to no avail.

Alia Nassif, an Iraqi member of parliament, told Al-Monitor that while the “demonstrators are facing a great deal of violence,” the statement of the 16 embassies regarding the demonstrations is “meddling in the internal affairs of Iraq.” She advised demonstrators to “resort to the Iraqi judiciary to file cases against those they deem to be involved in killing operations.”

Issam al-Faili, a professor of political science at Al-Mustansiriya University in Baghdad, told Al-Monitor, “The government and the parties that support it are neither aware of the seriousness of the statement of the 16 countries, nor of those of the United Nations condemning the use of violence.”

He said, “These countries — some of which are permanent members of the UN Security Council — could demand the prosecution of those involved in the killing of Iraqi demonstrators.”

Faili added, “Raising the UN flag is aimed at placing pressure toward the internationalization of the issue of violence against protests in Iraq, all the while pushing the international community to prosecute those involved in the killing of demonstrators.”

Some Iraqi political parties have started threatening to go to the international community in an attempt to halt the violence against the protesters. Chief among these are the head of the Qarar Coalition, Osama Nujaifi, and the head of the National Coalition, Ayad Allawi, who said one possible step would be to raise the protesters’ request to the Arab League.