More factories are ready to join the Egyptian president’s initiative to promote local products, which economists believe will boost the economy and fight unemployment. 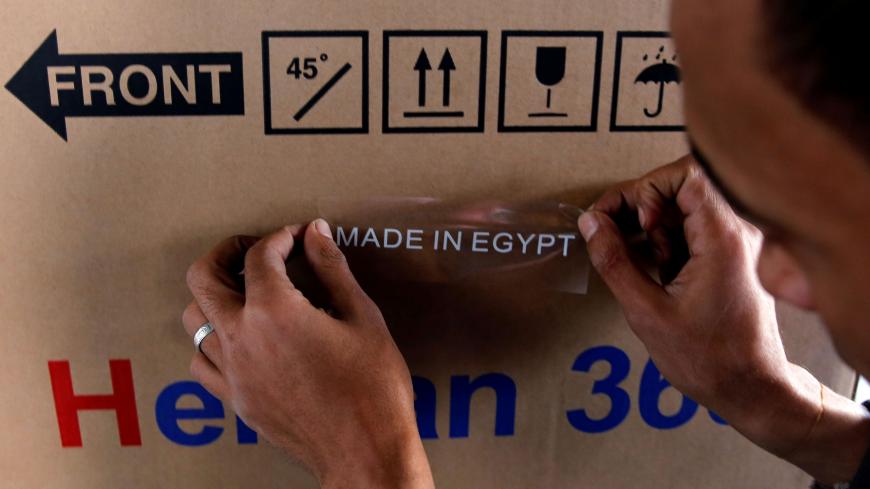 An employee puts a "Made in Egypt" sticker on a boxed refrigerator at Helwan Company for Metallic Appliances (Factory 360) on the outskirts of Cairo, Egypt, Feb. 20, 2017. - REUTERS/Stringer

CAIRO — Thousands of factories are rushing to join the initiative of President Abdel Fattah al-Sisi to encourage the purchase of local products. Mohamed Abdel Salam, head of the ready-made garment chamber at the Federation of Egyptian Industries, said in a Jan. 11 press statement that the number of clothing factories alone to join the initiative amounted to 300 factories as of the time of writing.

Prime Minister Mustafa Madbouly had held a meeting on Jan. 3 in the presence of Minister of Planning and Economic Development Hala al-Saeed, Minister of Social Solidarity Nevine el-Kabbaj and officials of the Federation of Egyptian Chambers of Commerce in Cairo to follow up on the steps required to start activating the initiative. Madbouly noted the need to accelerate implementation, as the initiative aims to provide citizens’ needs for goods at reduced prices through local products in addition to putting the market and sales in motion.

According to an official statement issued by the government following the meeting, the attendees were briefed on the most important axes of the initiative, which include defining a list of goods that are most important to citizens and locally available; the outlets that will participate in the distribution of goods; how to finance those outlets and some factories and producers; and how to market products, as well as price governance. The statement clarified that the contents of the preliminary list of commodities and distribution points participating in the initiative and financing mechanisms have been set, in coordination with the Ministry of Finance and the Federation of Egyptian Chambers of Commerce.

In terms of marketing, the statement indicated that there is a proposal to set up a website to display and sell the products participating in the initiative, in addition to organizing a central exhibition in Cairo to market these products, and other exhibitions in the governorates in coordination with the governors, provided that governance is carried out through field follow-up of the exhibitions by the concerned ministries and a mechanism to receive possible complaints about the initiative is developed.

In a statement on Nov. 17, 2019, the government revealed that Sisi had instructed it to launch an initiative to encourage citizens to buy local products instead of those that are imported, provided that the two main objectives of the initiative are to get some Egyptian manufacturers out of the recession when it comes to sales and purchases, as well as offer goods to citizens at reasonable prices, as the initiative will include providing cash support to families to buy these goods.

A government source told Al-Monitor on condition of anonymity that the initiative started to restrict imported products that Egyptians heavily consume, such as foodstuff, clothes, accessories, carpets and furniture, despite having local alternatives that they do not know even exist given the inability of their manufacturers to distribute or market them widely.

He noted that that inventory has ended and that all factories and companies producing these goods have been included in a list participating in the initiative, provided that the citizens who buy these goods receive cash support from the government or discounts in exchange for their purchase, in addition to the goods that the Egyptians already buy from local producers, many of whom will be participating in the initiative and offering discounts.

As for the launch date of the initiative, along with the website, exhibitions and sales and distribution outlets, the source said that the initiative was expected to be launched at the beginning of January to celebrate the new year, but it had to be postponed to the beginning or mid-February at the latest in order to have top efficiency in terms of the distribution outlets and their absorption of visitors and products, as well as to make sure the buy and sell process is easy through a website.

This initiative seems to be part of a broad strategy by the regime to rely on local products. In June 2018, Sisi approved amendments to Law No. 5 of 2015, known in the media as the Law on the Preference of Local Product in Government Contracts. Those amendments were approved by parliament in May 2017 after the Egyptian government proposed them.

The amendments aim to expand dependence on the Egyptian products in government contracts with any party to supply the needs of the state, the administrative apparatus and government bodies, except for the Defense and Interior ministries and the public intelligence authority and any authority on behalf of which the prime minister issues a decision, as their activities require confidentiality for national security considerations.

Salah Eddin Fahmy, professor of economics at Al-Azhar University, told Al-Monitor that the initiative kills “several birds with one stone.”

In addition to developing the sales of local products and offering goods at lower prices to citizens, Fahmy said that further dependence on local products will reduce imports, which cost the state billions of foreign currency, and thus deepens the trade deficit and the deterioration of the value of the local currency when the demand for it decreases against the foreign currency — the price of which increases accordingly, due to the large demand for it to cover import orders.

Meanwhile, Amr al-Gohary, a member of the parliamentary Economic Committee, told Al-Monitor about another benefit that the initiative brings to the Egyptian market. He said that reviving the local market and liquidity that would be made available to Egyptian manufacturers will help them expand their activity and investment, in addition to creating more job opportunities to reduce unemployment rates, which reached 7.5% in June 2019 compared to 8.1% in June 2018.

Gohary noted that 50% to 70% of foreign investments that enter the local market are petroleum investments, which are not labor intensive. He added, “We thus must rely on Egyptian investments to reduce unemployment rates among the youth.”

However, Wael al-Nahhas, an economist and financial adviser to a number of investment institutions, has a different opinion regarding the quality of local products compared to those that are imported.

“I believe this initiative is valuable except that I think the villages of Upper Egypt and the countryside depend on local products and the cities in which the citizens enjoy greater purchasing power will not resort to local products that are of lesser quality than the imported ones. Consequently, in conjunction with the initiative, there should be an attempt to raise the efficiency of local producers and develop industrial and technical education so that Egyptian products are of better quality that all Egyptians would want to purchase,” Nahhas told Al-Monitor.