Egypt is to pass amendments to a law that would give Egyptian President Abdel Fattah al-Sisi the right to transfer the ownership of state assets to Egypt’s sovereign wealth fund without facing any objections. 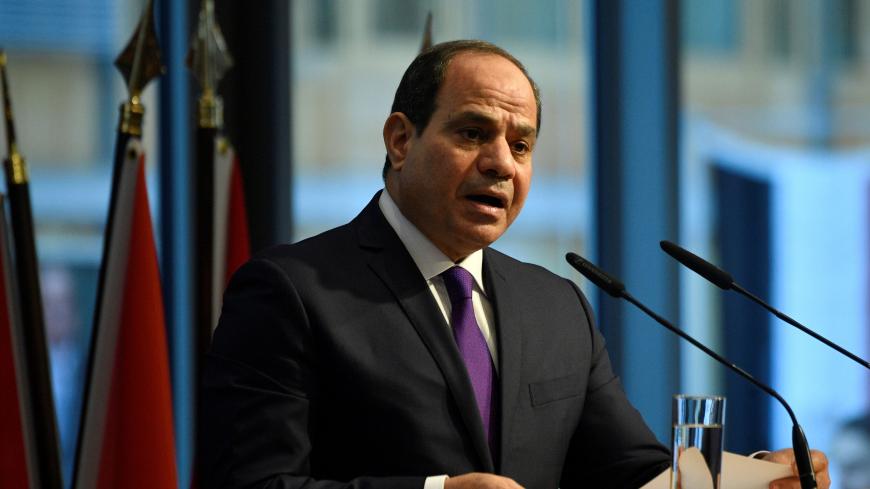 Egyptian President Abdel Fattah al-Sisi addresses participants of the "G-20 Investment Summit - German Business and the CwA Countries 2019" on the sidelines of a Compact with Africa in Berlin, Germany, Nov. 19, 2019. - John MacDougall/Pool via REUTERS

The minister said that the fund is confidently moving toward attracting investments in line with the sustainable development strategy Egypt Vision 2030.

This comes as the Cabinet approved Dec. 26 amendments to the Egypt Fund Law No. 177 of 2018 on the development of state resources and exploitation of state assets.

Article 6 of the law currently in force provides that the fund aims to contribute to sustainable economic development through the management of its funds and assets. Article 5 stipulates that the president of the republic has the right to transfer the ownership of any of the unused state-owned assets to the fund. It also allows for the transfer of assets used by the state in coordination with entities that own the assets in question.

Also, the amended text, which was submitted by the Ministry of Planning and Economic Development upon the request of President Abdel Fattah al-Sisi, protects the president’s decisions from potential judicial appeals. It states that the only parties allowed to appeal against presidential decisions related to the transfer of an asset ownership to the fund are either the asset owner himself or the fund.

Parliament is now expected to approve the amendments as it is dominated by the pro-Sisi Daam Masr Alliance.

According to the amendments, no person is allowed to file a lawsuit with the aim of annulling contracts concluded by the fund. Also, courts are not allowed to accept appeals or claims related to such disputes.

Some observers believe that the amendments contribute to the revitalization of the economic and investment cycle and help attract new investments in light of the increase in the volume of the authorized capital of the fund. However, others believe that such amendments portend economic deterioration and set the stage for corruption away from any kind of accountability and oversight. These opine that the state’s role is to provide a favorable environment for investments, and not sell state assets and property without accountability.

Parliamentarian Ahmed Tantawi, a member of the 25-30 bloc, told Al-Monitor that the new amendments will put the fund at the disposal of the executive authority as they allow it to act as it pleases without oversight or accountability even from parliament.

Tantawi noted that these broad powers give the executive authority the right to sell or lease state property to foreign investors or even to borrow from foreign entities by using such assets as collateral without the need for anyone’s approval, including parliament.

Such powers also give the president full powers to take any decisions without any objection from anyone, including the judiciary. This contradicts the constitutional provisions guaranteeing every citizen the right to litigate.

Article 97 of the constitution states, “The right to litigation is inalienable for all, and every citizen has the right to refer to his competent judge. The state shall guarantee the accessibility of the judicature organs to litigants, and the rapidity of statuting on cases. Any provision in the law stipulating the immunity of any act or administrative decision from the control of the judicature shall be prohibited.”

Economist Hani Tawfiq, who is also president of the Arab Union for Direct Investment, told Al-Monitor that the government is striving to create an investment environment capable of greasing the wheels of the Egyptian economy.

This, he said, prompted the state to protect sales contracts concluded by the fund in an attempt to lure Arab and foreign investors who fear government bureaucracy and would rather have their interests protected. It created a fund that can single-handedly take decisions without consulting any other party.

Tawfiq added that the government learned from past mistakes and the privatization experience over the past years, when court rulings would nullify sale contracts concluded by public sector companies, including Omar Effendi Company, Tanta Linen Company and Shebin El Kom Spinning & Weaving Company, among others. This is why, he said, the government is seeking to reassure foreign investors in Egypt.

On Dec. 8, Saeed said during her meeting with Prime Minister Mustafa Madbouly on the sovereign fund's work that meetings are currently being held with a number of Saudi investors who confirmed their desire to invest in the sovereign fund. She said that other similar meetings are to be held with a number of Emirati investors who are members of the Egyptian-UAE Business Council.

Since August 2016, the government has been seeking to breathe new life into the country's economy and attract investments through the 2016 economic reform program with the International Monetary Fund (IMF). The exchange rate was liberalized in the wake of that program, as energy subsidies were reduced and an unprecedented rise in commodity prices and services ensued.