A meeting in Washington produced agreement on some items to be included in a final accord to fill and operate the Grand Ethiopian Renaissance Dam, but failed to resolve significant, long-standing sticking points between Egypt and Ethiopia. 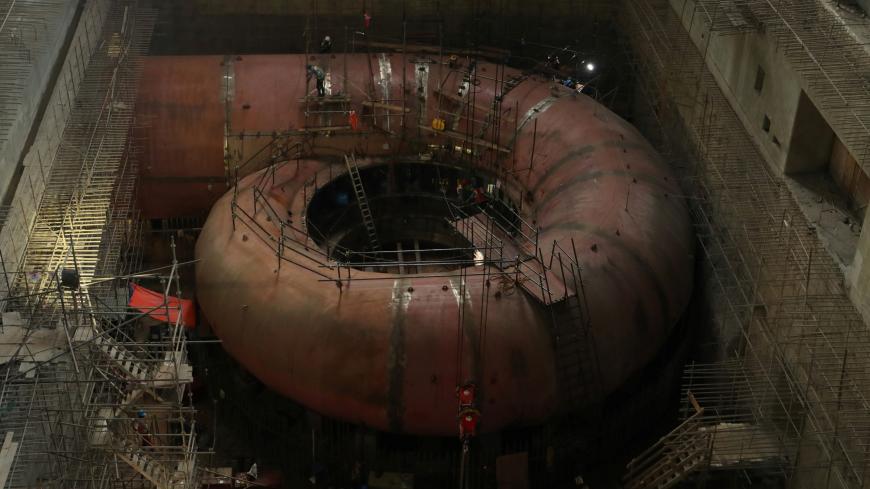 CAIRO — Talks on the Grand Ethiopian Renaissance Dam continue to disappoint despite ongoing mediation by the US government and the World Bank.

Foreign and water ministers for Egypt, Ethiopia and Sudan met last week in Washington in the presence of US Treasury Secretary Steven Mnuchin and World Bank President David Malpass. When the three-day meeting ended Jan. 15, participants decided to include six points in a potential comprehensive agreement on the rules for filling and operating the dam.

But no agreement was reached on any of the contentious issues that have foiled the technical negotiation rounds during the past two months. Overall, disagreements over the $4 billion dam have been ongoing for nine years.

Cairo fears the dam project on the Nile River threatens Egypt's water supply and will harm the environment.

According to the joint statement issued by the US Treasury after the meeting, the ministers agreed on the six points, but acknowledged the issues all are subject to a final agreement. The points include filling of the dam in stages and during the wet season. The third point reads, “The initial filling stage of the dam will provide for the rapid achievement of a level of 595 meters [1,952 feet] above sea level and the early generation of electricity, while providing appropriate mitigation measures for Egypt and Sudan in case of severe droughts during this stage.”

The ministers agreed to meet again Jan. 28 and 29 in Washington to supposedly finalize the comprehensive agreement. “There will be technical and legal discussions in the interim period,” the joint statement said.

In the first official Egyptian reaction to the outcomes of the Washington meeting, Foreign Minister Sameh Shoukry said in an interview with MENA news agency that Egypt was “cautiously optimistic” about reaching a critical point regarding the dam.

He said the six points don't represent a consensus on specific issues, but rather "an attempt to review various important issues.”

An official with the Egyptian delegation to the United States said on condition of anonymity, “There is still disagreement over fundamental technical matters related to the natural flow of the river, and the quantities of water released during the successive stages of filling and long-term operation. There is also no agreement on measures to deal with drought and prolonged periods of drought. These measures were subject to a long debate at the technical consultations.”

The official said, “Technical assistance provided by the US consists of solutions and proposals to converge views without imposing any conditions on Egypt or others." He added, “Egypt appreciates these efforts. This would safeguard our minimum demand that the filling and operation of the dam do not cause severe damage to Egyptian water security.”

The official said reaching a comprehensive agreement is not a political race that the concerned parties seek to win, saying, “Egypt will not allow any points that harm its interests in the Nile waters to be approved.”

Meanwhile, observers of the course of the negotiations remain skeptical because the meeting failed to tackle several technical issues that have always been the subject of disagreement between Egypt and Ethiopia.

Khaled Abu Zeid, secretary-general of the Egyptian Water Partnership, told Al-Monitor, “The outcomes of the Washington meeting represent a general overview of the points that may be included in the comprehensive agreement on the rules for filling and operation" of the dam.

He went on, “Some of the points in the joint statement require the examination of technical details. This is especially true in relation to ... long-term operation, standards related to … water release and measures to mitigate the effects of drought and prolonged periods of drought.”

According to the second point covered in Washington, filling will take place during the wet season, generally from July to August. “It's better that filling takes place during the high rainy season, which is the period mentioned in the meeting’s joint statement," Abu Zeid said.

He added, “A clear agreement must be reached on the mechanism of water and electricity compensation when any damage occurs during any of the filling or operating stages, especially during drought periods.”

He added, “Operation shall take place according to rules that guarantee the release of the annual discharge of the Blue Nile throughout the months of the year after repeated annual filling during the flood months.”

He warned that storing water from one year to another at high levels could increase evaporation losses and water leakage, not to mention the cumulative effect of those losses, saying, “This may cause an accumulated decrease in the volume of water released from the dam to the two downstream countries.”

For Rawia Tawfiq, a political science professor at Cairo University, the Washington meeting made no progress on the main points of contention between Egypt and Ethiopia regarding filling and operating the dam. “The only advantage is that it succeeded in reducing previous tension between the two countries,” she told Al-Monitor.

The failure of the water ministers and technical delegations from the three countries to reach agreement during the four technical meetings that ended Jan. 9 in Addis Ababa had stirred tension.

Ethiopian Foreign Minister Sileshi Bekele issued a statement that day accusing the Egyptian negotiating delegation of not showing any intention to reach an agreement. He lashed out at Egypt for insisting on having its entire proposal included in any agreement on the filling of the dam and its operation. He said Egypt's proposal stipulates filling the dam over 12 to 21 years and requires Ethiopia to compensate for the “cumulative deficit” of water it uses during the filling period. But for Ethiopia, the concept of “cumulative deficit” does not exist as the country plans to apply drought mitigation strategies at all filling stages.

Egypt responded the next day with a strongly worded statement from its Foreign Ministry describing the Ethiopian statement as containing misleading and unacceptable information. Egypt slammed the four ministerial meetings for failing to achieve tangible progress due to “Ethiopia's intransigence” and intention to impose “the policy of a fait accompli and extend its control on the Nile.”

Tawfiq also said the Washington meeting did not achieve real progress. “Loose terms were used. No decisive position was taken and no specific obligation was imposed on any of the parties," she said.

She said Shoukry’s statement after the Washington meeting pointed to the possibility of resorting to a different mediator should the US and World Bank attempts fail.

Pointing to political instability in Ethiopia and the competition expected in next year's elections, Tawfiq said Ethiopian Prime Minister Abiy Ahmed faces great challenges, making it difficult for Ethiopia to make concessions regarding the dam.

Thus, hopes rest with US efforts to resolve the dam issue between Egypt and Ethiopia, which threatens peace and security in the Horn of Africa and the Middle East. The assistance the United States may offer during the Jan. 28 meeting could be decisive.