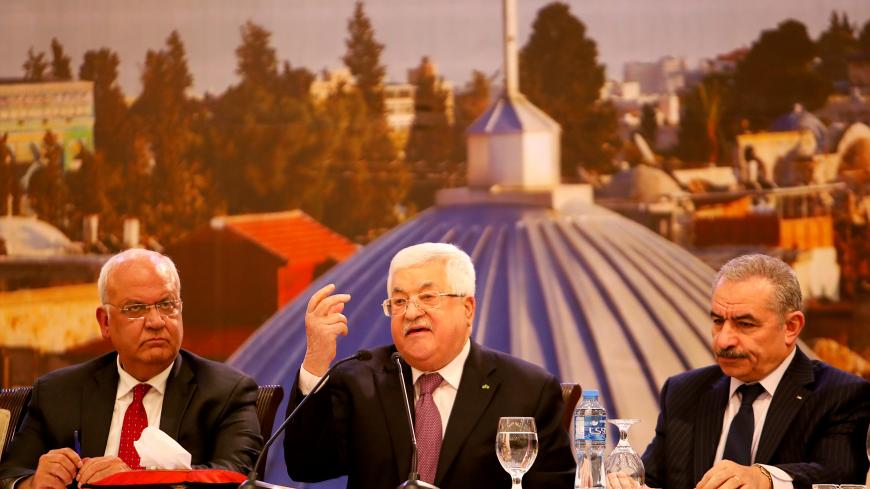 Palestinian presidential adviser Nabil Shaath reflected on the dilemma facing President Mahmoud Abbas following the unveiling of the Peace to Prosperity plan for the Middle East. “The president has re-emphasized the need for national unity, and has agreed to a request to go to Gaza to attend a unity meeting, has supported the need for popular struggle and has called for [revisiting] the functions of the Palestinian Authority,” he told Al-Monitor.

What Shaath was unable to say is whether the decisions that Abbas will make will force him to choose between political, or even personal, survival as part of the process of reviewing relations with Israel.

In a televised speech on Palestine TV the night of Jan. 28, Abbas listed the actions that can be taken in reaction to the American plan. Abbas spoke about the upcoming Arab League meeting Feb. 1, to be followed by a meeting of the Organization of Islamic Cooperation, the nonaligned countries and then a meeting of the African Union. But Abbas emphasized that Palestinians can’t expect help from outside “without doing our own part.”

Diana Bhutto, a former legal adviser to the Palestinian negotiating team, described in much sharper language the choices facing Abbas. “In the past, President Abbas has been reluctant to do what is needed to hold Israel accountable for its actions," she said. "If he decides to change and pursue a strategy of holding Israel accountable, then he has no choice but to begin supporting the boycott, divestment and sanctions (BDS) movement and to suspend security coordination with Israel.”

When asked, Shaath was hesitant to say whether Abbas would support BDS. “BDS is an act by activists or factions such as Fatah and Hamas but not by the government," he said. "When we stopped importing calves a few weeks ago, the Israelis implemented harsh revenge on us.”

The Palestinian Authority banned the import of calves from Israel in October 2019, instead importing them from other countries as part of an “economic disengagement” plan. Israel responded with a number of measures that negatively impacted the Palestinian economy.

Bhutto understands that if Abbas were to pursue these steps it would provoke Israel’s wrath. The question that needs to be answered is whether he is backed by a strong, unified people willing to bear the consequences of such a courageous decision. Bhutto told Al-Monitor she is not confident that Palestinian factions are willing to unite. “If the 2014 war against Gaza didn’t get them to unite, nothing will,” she said.

Hani al-Masri, the executive director of Masarat think tank, believes the idea of national unity cannot be addressed simply by a one-off meeting. “There has to be a wide net that encompasses the largest possible representation of Palestinians,” he told Al-Monitor. According to Masri, for national unity to work, it can't be limited to a few leaders but must include representatives of civil society, the women’s movement and youth activists, as well as union leaders and community organizers throughout Palestine.

Salwa Hudaib, a member of the Fatah Revolutionary Council, told Al-Monitor that while the participation of Hamas and Islamic Jihad in the leadership meeting Tuesday was welcomed, she doesn’t believe this will lead to unity. “I don’t trust that Hamas will continue in the unity process,” she said.

Meanwhile, Kayed Ma’ari, director of the Witness Center for Citizens Rights in Nablus, told Al-Monitor that what is needed is strategic and continuous action, not an isolated reaction to Donald Trump's speech.

Abbas addressed the popular struggle in his speech, but it was not clear if the Palestinian leadership is willing to commit to an escalation of unarmed attacks against Israel. Palestinians have long discussed and debated nonviolent struggle, but without a clear consensus on guidelines. In Gaza, unarmed attacks in the form of the March of Return were often politically manipulated and failed to stay totally nonviolent.

The choices available to the Palestinian leadership are not easy. While the Palestinian side has a strong and effective negative power in saying no to policies and ideas that are presented, the latest effort by the United States might not be easy to overcome. Although the Trump plan reflects his support for the reelection of Prime Minister Benjamin Netanyahu, what is worrisome is that such a detailed plan, with its many gifts to Israel, will become the new reference point. It risks prompting a shift away from international resolutions to a pro-Israel plan that might result in the annexation of more Palestinian land. This is what makes the Palestinian leadership's position so difficult. Strong national unity and a willingness to make even more sacrifices are needed.