The agreement between Yemen's government and secessionist forces in the south has shown little progress since it was signed more than a month ago. 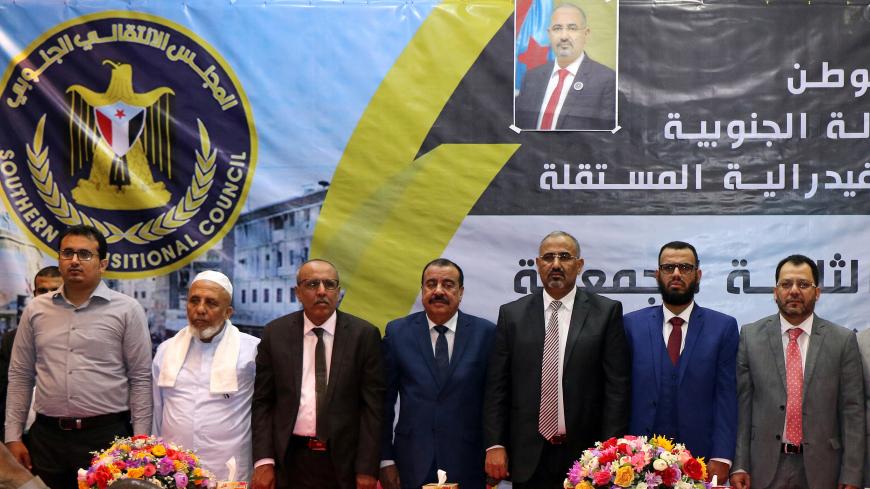 Various deadlines have passed since Saudi Arabia brokered a deal between the Yemeni government and the secessionist Southern Transitional Council (STC) to share power. Little has been achieved. Disputes have not been entirely buried and Yemen’s south still faces uncertainty.

On Nov. 5, the Saudi-backed Yemeni government and United Arab Emirates-backed STC inked the power-sharing pact in Riyadh to end the strife in southern provinces — particularly in Aden, Shabwa and Abyan. Both sides had been part of an Arab coalition battling the Iran-backed Houthis. Though more than a month has gone by, several terms of the agreement are unmet and each side accuses the other of interfering with the deal's implementation.

The agreement called for the government to appoint a governor and a security director for Aden and to form a balanced government of 24 ministers within 30 days. These points remain unfulfilled and the agreement has fared badly thus far.

On Dec. 6, a pro-government Yemeni battalion of the Presidential Protection Forces was moving from Shabwa south toward Aden. STC forces stopped them near Shuqra in Abyan province, and a deadly encounter erupted. That was the first armed confrontation between the two sides since the agreement was signed.

State-run Saba News Agency cited government spokesman Rajeh Badi as saying the protection forces' movement was not aimed at building up military forces in Aden, as the STC suspected, but rather was only part of the president's protection as stipulated in the agreement.

However, STC military spokesman Nezar Haitham accused the government of not sticking to the Riyadh agreement, saying no military force can enter Aden before a new security director and provincial governor are appointed.

Apparently, any armed confrontations will add to wounds on both sides, widen differences and deepen their mistrust. These developments point out that the situation in Yemen’s south is still fluid and the Saudi-brokered agreement has not sown seeds of peace.

A government official told Al-Monitor on condition of anonymity that the STC has flouted the terms of the Riyadh agreement and acted to obstruct its implementation.

“The STC impeded the movement of the Presidential Protection Forces battalion and this contradicts the agreement, which stipulated the return of this battalion to Aden,” the official said. “Another problem lies in the multiple interpretations of the agreement terms. Every party interprets it according to its interests and desires.”

Middle East Monitor reported that, according to a Houthi-affiliated website, the STC rejected the deal Dec. 1. The report has not been independently confirmed. However, STC's Haitham has said the group remains committed to the agreement as long as the government is as well.

The Riyadh agreement faces formidable challenges, specifically with regard to military and security issues, which are complicated by the deep mistrust between the two sides. Reshuffling military units and conscripting militias is a difficult process that could take time to materialize.

The government official acknowledged the agreement was “super optimistic." He said, “The security and military issues are supposed to be given more time, considering it is difficult to restructure forces and withdraw weapons from militias within days. It will take a long time, especially in the Yemeni landscape, which resonates with complexities.”

Mohammed al-Ashwal, a Yemeni journalist focusing on military affairs, also ruled out the possibility of reorganizing STC forces quickly. “The agreement stipulated the reshuffling of the forces in 15 days after the signing, but this is not feasible. The STC should have a genuine will to allow its forces to be reshuffled and merged under the defense and security ministries.”

Ashwal said the reorganization also depends on the Sunni Arab coalition that has been combating Yemen’s Iran-backed Shiite Houthi group since March 2015.

“The coalition funds these forces [in the south]. It has also been providing them with weapons since the beginning of the war. Therefore, if the coalition is not serious about ending the current chaos in the south, reshuffling the forces will not happen,” he said.

Although some Yemeni government officials including the prime minister returned to Aden last month as part of the agreement, Aden remains beset by tough living conditions and lax security.

Aden resident Shukri Abdulla told Al-Monitor that the general situation there has not positively changed since the Riyadh agreement was signed, and people have seen no tangible improvement in services.

“Power outages and fuel shortages continue even since the return of the government. We [civilians] are still frustrated and the security situation is not completely stable,” said Abdulla.

Over the past few days, militants believed to be connected to the Islamic State assassinated a high-ranking officer of the STC-affiliated Security Belt force and a Yemeni Coast Guard marine in Aden. The southern port city has been hit by a series of assassinations over the past three years due to the divergent political and military agendas.

The power-sharing agreement between the secessionists and the government is too shaky to persuade the former to put aside their ambition of restoring southern independence from the north.

On Dec. 12, STC head Aidros Al-Zubaidi delivered remarks in Aden commemorating the passage of 100 days since the death of leading STC military commander Gen. Munir Mahmoud Al-Yafi (also known as Abu Al-Yamama), who was killed during a military parade by a Houthi missile attack in August.

Zubaidi said, “Today, we renew our pledge to him [Abu Al-Yamama] and all martyrs to struggle for the victory of our cause, people and nation, to restore and build our southern state with Aden as its eternal capital.” The STC stance toward secession remains unchanged and the Riyadh agreement has not been able to stem — at least so far — the divisive language.

Marib Alward, a Yemeni political analyst, told Al-Monitor he did not expect commitment to the agreement timelines.

"So far, only one term of the agreement has been implemented, which is the return of Prime Minister Maeen Abdulmalik to Aden. However, there has been no progress on the military and security issues in Aden. The withdrawal of forces to their previous positions and the handover of heavy and medium weapons possessed by various armed groups to the coalition camp in Aden have not been fulfilled,” said Alward.

Over the past five years, Yemen peace talks have not stopped and peace agreements have been signed, including the year-old Stockholm Agreement between the Houthis and the Yemeni government. Still, peace remains far-fetched and treaties keep hitting dead ends.