Saudis' release of Houthis met with both hope, skepticism

Houthi senior officials welcomed Saudi Arabia's release of detainees, but much remains to be resolved in the bloody four-year battle. 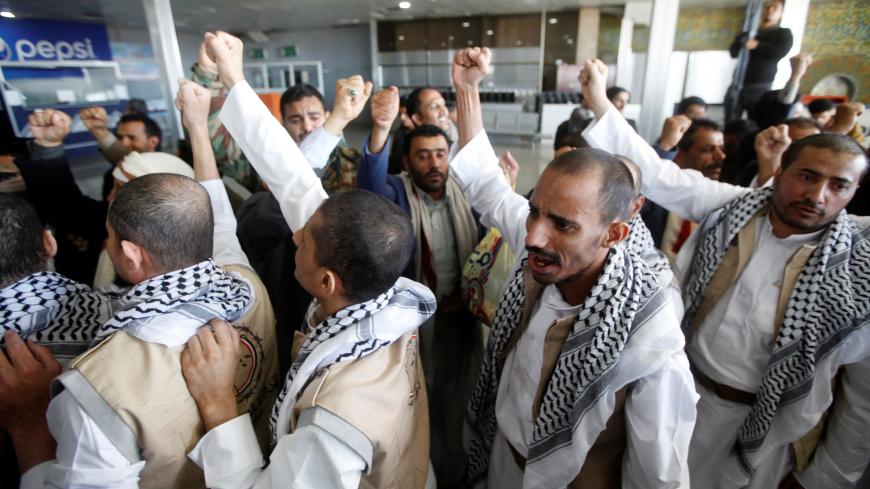 SANAA, Yemen — Houthi militia detainees recently released by Saudi Arabia arrived Nov. 28 in Sanaa to be repatriated, leading to speculation over whether Riyadh took the action from a position of power or one of vulnerability.

In a four-year-long proxy war, a Saudi-led Arab coalition has backed the UN-recognized government of Yemeni President Abed Rabbo Mansour Hadi, while Riyadh's arch-rival in the Middle East, Iran, supports the Houthi rebels.

On Nov. 28, the International Committee of the Red Cross said in a tweet that it had facilitated the repatriation of 128 detainees to Sanaa. The discrepancy in the number of released prisoners hasn't been resolved yet, and there remain questions about whether the airport is indeed allowing flights to leave.

Malki said the prisoner release may lead to a broader exchange deal that has been repeatedly delayed since an agreement was reached last year in Sweden between Yemen’s rival parties.

Abdul-Qader al-Murtada, head of the Houthis’ National Committee for Prisoners' Affairs, also mentioned the Sweden deal. He said in a Nov. 28 tweet, “This (the current Saudi release) is a good step. We hope that it will be followed by other steps, and that the prisoner exchange deal stipulated [in the Sweden agreement] will be fully implemented."

In September of this year, the Houthis, who control Sanaa and major provinces in the north, freed roughly 300 prisoners, including three Saudis. The unilateral release came after Houthis captured hundreds of Saudi-backed forces on the border in August. Considering that, Saudi Arabia’s release of Houthi prisoners could be a show of goodwill, with hopes the Houthis will then free more Saudi-backed fighters.

Meanwhile, some military experts believe the Saudi release of detainees aims to send a message to its opponents that it remains in a strong position.

But Houthis sought to prove this message wrong. The rebel group announced Nov. 29 it had shot down a Saudi military helicopter near the Saudi border and claimed the two crew members were dead.

“The Apache helicopter was shot down today in the Majazah area near the Saudi border region of Asir while it was carrying out hostile activities,” Houthi military spokesman Yahya Sarea said in a statement. On Nov. 30, Sarea published a video said to show the moment the military helicopter was downed.

Saudi Arabia has neither confirmed nor denied the report.

Al-Monitor contacted Sarea’s office to inquire about the fate of the two Saudi pilots' bodies. “Their [fate] hasn't been disclosed yet,” his office responded via WhatsApp.

Also on Nov. 30, the Houthis said they shot down a reconnaissance drone over Hajjah province in northern Yemen.

If the Saudis intended to send a message of strength, it apparently wasn't received.

One journalist told Al-Monitor, "There is no message that Saudi Arabia wanted to send. Rather, the reality of the Houthis' military power forced it to [release the prisoners] in the wake of the Aramco attacks and away from Hadi's government." The Houthis claimed responsibility for September attacks on the state-owned Aramco oil refineries, though the United States blames Iran. Tehran denies involvement.

Journalist Mohammed al-Alwi with Yemen's 26 September newspaper said, "This step (Saudi Arabia releasing prisoners) will not lead to comprehensive and genuine talks between Saudi Arabia and the Houthis." Rather, he said, both sides could be preparing for a military escalation, given that the Saudi helicopter and drone were in unauthorized areas and the Houthis didn't hesitate to shoot them down.

Some observers were a bit more optimistic.

United Nations Special Envoy for Yemen Martin Griffiths welcomed the Saudi release and the anticipated reopening of the airport.

Senior Houthi figures also welcomed the Saudi decision. Mohammed Ali al-Houthi, head of the Supreme Revolutionary Committee and a member of the Supreme Political Council, praised the move in a Nov. 26 tweet, though he also called on Saudi Arabia to stop its alleged torturing of prisoners.

As for the Sanaa airport reopening, the Saudi-led coalition had imposed a siege since August 2016; only UN flights have been allowed to operate there.

Journalist Al-Khattab al-Rawhani wrote in a Nov. 26 tweet, “It (the Saudi-led coalition previously) closed Sanaa airport in the face of civilians to punish Houthis. Then, it decided to reopen it today to the Houthis for humanitarian reasons, but continues to block it for civilians.”

In mid-September 2018, UN humanitarian coordinator to Yemen Lise Grande signed a memorandum with Hisham Sharaf, foreign minister of the Houthi's National Salvation Government, to open an air corridor in Sanaa. The deal angered the Saudi-backed Yemen government, which accused Grande of colluding with the Iran-backed Houthis. Since then, all attempts to reopen the airport have failed.