As a new offensive by the Syrian regime sends 120,000 Idlib residents fleeing toward the Turkish border, President Recep Tayyip Erdogan said his nation "will not carry such a migrant burden on its own." 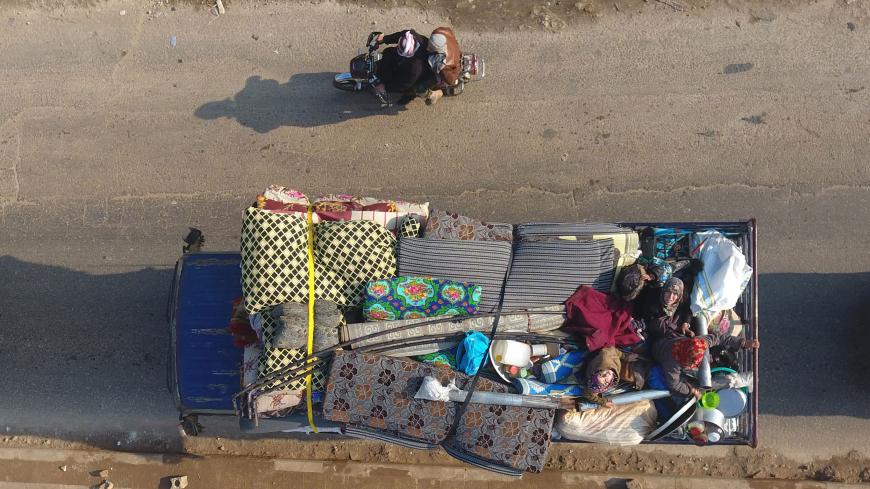 Syrian families flee the village of Hazano, northwest of the city of Idlib, toward the Syrian-Turkish border, seen in an aerial photo taken Dec. 22, 2019. - AREF TAMMAWI/AFP via Getty Images

Responding to the latest developments in the 8.5-year-old Syrian war, Turkish President Recep Tayyip Erdogan said his country, which currently hosts 3.7 million Syrian refugees, could not handle a fresh wave of migrants on its own.

Speaking at an awards ceremony Sunday, the Turkish leader said an estimated 80,000 people were currently moving toward the Turkish border in the Syria’s northwestern Idlib province, where about three million people have taken shelter from Syrian President Bashar al-Assad’s forces in the ongoing conflict.

“If the violence toward the people of Idlib does not stop, this number will increase even more,” Erdogan said. “In that case, Turkey will not carry such a migrant burden on its own.”

He added such inflows of new refugees could recreate unsustainable pressure on humanitarian aid groups that led to the 2015 EU migration crisis. “The negative impact of the pressure we will be subjected to will be something that all European nations, especially Greece, will also feel,” Erdogan said.

“If the tragedy continues to grow, Turkey will need to open the border, but will resist until the last minute,” Metin Corabatir, president of the Ankara-based Research Center on Asylum and Migration, told Al-Monitor.

If the appeals don’t work, “the international community will need to guide displaced people to other regions in Syria, either under the control of Turkey-backed forces or under international coalition control,” Corabatir said. “We don’t have many alternatives.”

Humanitarian assistance was further complicated Friday following a veto of a UN Security Council resolution by Russia and China that stopped cross-border aid deliveries into Syria from Turkey and Iraq. US Secretary of State Mike Pompeo said officials in Russia and China had blood on their hands for blocking the resolution.

“The Russian Federation’s and China’s veto yesterday of a Security Council resolution that allows for humanitarian aid to reach millions of Syrians is shameful,” Pompeo said in a statement.

Despite a Russian-brokered Sept. 2019 cease-fire, regime forces have continued their push into rebel-held areas in northwest Syria. According to the United Nations, about 60,000 Idlib residents had been displaced in the weeks ahead of the latest offensive. The movements come as winter conditions arrive in the region, “exacerbating the vulnerability of people in need,” according to UN reports.

Turkish forces maintain 12 observation posts in northwest Syria, but they have not slowed advances by Russian-backed Syrian troops, which have steadily approached Turkish military locations, surrounding one observation post in the village of Surman on three sides.

The news comes as citizens in Turkey, which currently hosts the world’s largest refugee population, have increasingly opposed taking in more Syrians. Amid an economic downturn in Turkey, Erdogan’s ruling Justice and Development Party (AKP) suffered significant losses in 2018 municipal elections, partly due to what some opposition leaders claimed was mismanagement of the refugee issue.

Responding to such sentiments, Erdogan has campaigned for international support to repatriate one million refugees to areas in northeast Syria currently held by Turkey-backed forces following Operation Peace Spring in October.

“Anti-refugee and anti-American sentiments are the two issues that unite Turkish citizens across different party lines,” Berkay Mandiraci, a Turkey analyst for the International Crisis Group, told Al-Monitor. “With its narrative of returning Syrians to areas under Turkish military control in Syria’s north, the government has also raised the public’s expectation to see Syrians leave their neighborhoods soon.”

Mandiraci continued, “A new wave of refugees could further upset Turkey’s electorate and drive down support rates for the ruling AKP at a time when the party is already challenged by public discontent from downward spirals in the economy as well as growing internal opposition in Turkey’s pro-conservative camp.”

Turkish citizens have also expressed resentment toward refugees for adding pressure to public services such as schools, hospitals and social aid, particularly along the country's provinces bordering Syria, Mandiraci said.

Officials in Ankara claim Turkey has spent more than $40 billion to host its refugee population and have long criticized the European Union and the international community for not providing more humanitarian support since the Syrian war began in 2011. The United Nations pledged to bolster refugee assistance programs with an additional $3 billion in support during a global refugee forum in Geneva last week.

At the same time, Greek islands have seen a growing number of asylum seekers arriving from Turkey in recent months, with more than 10,000 people disembarking in September — the highest single-month number since the EU-Turkey migration deal was brokered in May 2016.