Turkey fears another humanitarian disaster on its doorstep in Syria as Russia and Syria bomb civilian targets in their push to retake the country’s last rebel stronghold. 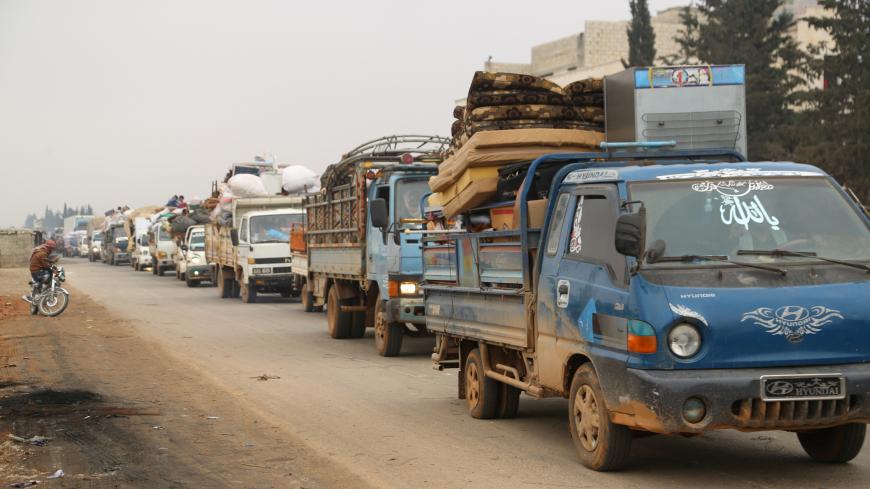 ISTANBUL — Tens of thousands of people fleeing a Russian and Syrian offensive in the northwest Syrian province of Idlib have reached the Turkish border this week, swelling the number of displaced people in the rebel stronghold to nearly a half million as another cease-fire all but shatters.

Dozens of people have been killed since Jan. 12, when Turkey brokered a truce with Russia in Idlib, the last opposition-controlled area in war-gutted Syria that has faced intermittent bombing campaigns by Syrian forces and their Russian partners since April. Turkey’s top diplomat this week urged Russia to respect the latest cease-fire, calling its violations “unacceptable.”

Turkish President Recep Tayip Erdogan and his Russian counterpart Vladimir Putin have hammered out a half dozen or so cease-fires for Idlib since last year that have all collapsed. But their continued engagement on Idlib indicates how central the area is in the two countries’ broader relationship, which includes weapons deals and mutual distrust of Washington, as well as attempts at a settlement for the conflict in Libya.

Ankara has shifted its focus to Libya, where it has sent troops (and Syrian opposition fighters) to back the internationally recognized government in Tripoli in exchange for a maritime agreement that could thwart its Mediterranean rivals’ exploitation of natural gas under the seabed. Russia backs Gen. Khalifa Hifter, who is battling to seize the Libyan capital.

Meanwhile, Idlib continues to bleed. Renewed fighting since November has killed hundreds of civilians and displaced as many as 450,000 people in Idlib as Damascus seeks to recapture the last opposition bastion. The government controls about 70% of Syrian territory after almost nine years of a war that has killed an estimated 400,000 people and has vowed that Idlib, too, will fall.

Moscow said on Thursday anti-Assad militants had seized two settlements and forced the Syrian army to abandon some positions.

Erdogan warned Jan. 14 that Turkey could be compelled to intervene to stop the Syrian government’s breaches of the cease-fire. His army deployed reinforcements in armored convoys to its outposts in Idlib on Wednesday, the Syrian Observatory for Human Rights said. Those outposts, set up to monitor what is supposed to be a de-escalation zone in Idlib, are increasingly under threat as Syrian government forces make large gains in their latest push for Idlib.

Turkey has said it cannot handle a new influx of refugees while it already looks after some 3.6 million Syrians who have made the country the world’s largest host of refugees. Turkish aid groups are building housing for tens of thousands a few miles inside Syria.

An estimated 3 million civilians in Idlib are boxed in between the airstrikes and a closed Turkish border. Refugee camps are sinking in mud, and families huddle in unheated tents that are not weatherproof. Women and children make up the majority of the displaced in the camps, which proper lack schools. Life in Idlib is a “daily nightmare,” as the humanitarian situation deteriorates, the United Nations said.

The UN was only able to renew authorization to deliver cross-border humanitarian aid earlier this month in an 11th-hour deal after Russia, joined by China, vetoed an earlier draft. They eventually agreed only to allow supplies to enter for six months, rather than 12 months.

Humanitarian actors complain that the world has largely turned its back on the latest victims of Syria’s protracted conflict amid public fatigue with the quagmire. An EU spokesman on Thursday could only offer another statement calling for an end to attacks against civilians in Idlib.

The West’s disengagement with Syria has effectively left Ankara as the last defender of the Syrian opposition. But its position at the bargaining table is “asymmetric,” said Aykan Erdemir, a senior fellow at the Foundation for Defense of Democracies in Washington. “Russia leverages pressure [on Turkey] in Idlib, knowing that refugees can be weaponized when there is growing anti-refugee sentiment in Turkey,” he told Al-Monitor.

“On the flip side, Libya and Idlib are Turkey’s bargaining chips in its relations with Russia … Idlib and Libya can be used as leverage for each other, as well as for the broader conflict in Syria, including Syrian Kurds and an eventual settlement with the Assad regime.”

Turkey controls about 3,000 square miles of Syrian territory after launching three military campaigns since 2016. The latest was in October to fight a US-allied Syrian Kurdish militia and forced the United States to hastily evacuate from the country’s northeast. After that, Erdogan sealed a deal with Putin to create a buffer zone free of Kurdish militants along that stretch of its border.

On the sidelines of Libya talks in Moscow this month, Russia engineered talks between the heads of the Syrian and Turkish intelligence agencies, the first high-level meeting between the two governments since 2011. The surprise meeting not only illustrates how the seemingly discrete geopolitical issues of Libya and Syria are linked for Turkey, but also reveals how Putin may be the ultimate arbiter of both.