Tunisia's incoming prime minister is including various political parties in talks on forming the new government, but his inclusion of the liberal secular party Qalb Tounes has irritated the dominant Ennahda faction. 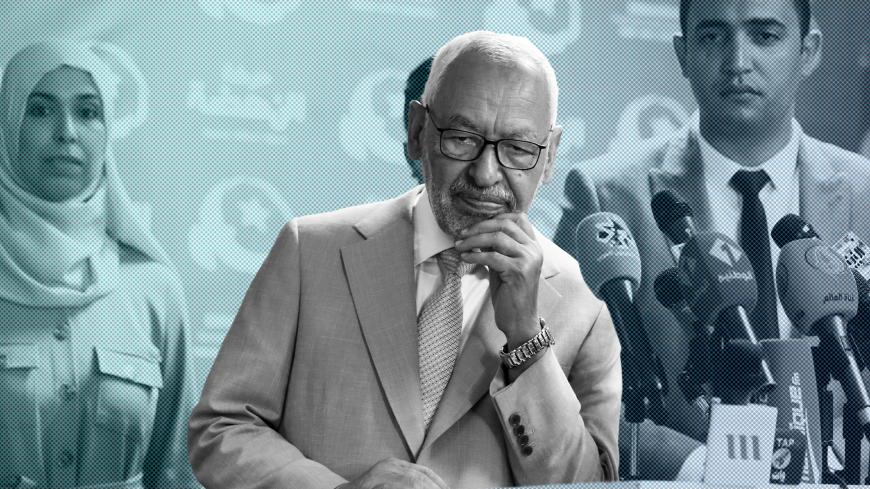 TUNIS — Tunisian Prime Minister-designate Habib Jemli officially kicked off consultations with political parties Nov. 15 to form his new government. Jemli was nominated to his post by the Ennahda Movement, the party with the largest number of seats in parliament (54 of 217).

On Nov. 22, Jemli held consultations with the liberal secular party Qalb Tounes (Heart of Tunisia), the second largest party with 38 seats. The meetings sparked controversy as Ennahda head Rachid Ghannouchi had said that Qalb Tounes would not become part of the government over suspicions of corruption among some of its leaders.

Ali Laarayedh, deputy head of Ennahda, told Al-Monitor that his party, which has been in power for eight years, is determined to stay in power and is ready to consult with all the winning parties, except those accused of corruption. Nabil Karoui, the founder of Qalb Tounes was imprisoned on Aug. 23 on money laundering charges.

In the 2014 elections, Ennahda came in second in parliament after Nidaa Tounes. The two movements formed a government together but their consensus ended by the end of 2018. Following the Oct. 8, 2018 breakaway of numerous Nidaa Tounes lawmakers who formed their own parties such as Machrouu Tounes, Amal Tounes and Long Live Tunisia, Ennahda returned to power in parliament.

As parliament speaker, Ghannouchi confirmed in televised statements Nov. 18 that Ennahda will exclude Qalb Tounes from government consultations, as part of Ennahda’s vows to fight corruption.

Qalb Tounes spokesman Hatem al-Maliki told Al-Monitor that his party accepted Jemli's invitation to discuss forming the government. “This does not necessarily mean that Qalb Tounes will be effectively taking part in the consultations to form a government. The meeting with Jemli was merely consultative. It aimed to exchange views on technical and political issues related to government formation.” Maliki said his party will not participate in the government.

A number of major Tunisian parties have rejected Ennahda's proposal to name a prime minister from its own ranks to head the next government coalition. Moreover, the Democratic Current, with 22 seats in parliament, set heading the ministries of justice, interior, and administrative reform as a condition for its participation in the government. The party also wants an independent prime minister to form a clear political and economic program.

Meanwhile, Echaab (The People's) Movement, with 16 parliamentarians, proposes the formation of what it called the “government of the president.” It wants President Kais Saied to appoint an independent figure that he trusts and that is supported by the parties in parliament as head of a government. Echaab has not ruled out being positioned in the opposition camp.

The secularist movement Tahya Tounes, with 14 seats, led by current Prime Minister Youssef Chahed, has chosen to remain in the opposition. It joins the Free Constitutional Party, which maintains its loyalty to the ousted regime of President Zine El Abidine Ben Ali and his programs. In an Oct. 10 press statement, Abeer Moussa, the founder of the Free Constitutional Party, rejected any alliance with Ennahda. Moussa accuses Ennahda of being behind terrorist activity in the country after the revolution.

The approval of the government in parliament requires a majority of 109 votes out of 217. Ennahda has only its 54 votes in addition to 21 votes from the far-right Islamist Karama coalition, and the parties that Ennahda seeks to ally with are either setting strict conditions or preferring the opposition camp.

Zuhair al-Maghazawi, the secretary-general of Echaab, told Al-Monitor that his party is ideologically different from the Islamic Ennahda. “It would be dangerous if Ennahda led the government in the coming period, given its failure to manage Tunisia's economic and political crisis.”

He continued, “Echaab recalls the unfortunate fate of the parties that allied themselves with Ennahda, such as the Democratic Forum for Labour and Liberties, also referred to as Ettakatol, in the troika government and Nidaa Tounes after the 2014 elections. This is why we will not participate alongside Ennahda in the formation of the next government.”

Speaking to Al-Monitor, political analyst Mohamed Bououd expressed fear that the government would not be formed before the constitutional deadline.

“Ennahda is politically incapable of meeting its electoral pledges and will be forced to ally with Qalb Tounes to preserve its political interests and its position in power,” Political analyst and former editor of Sawt al-Chaaeb newspaper Abd Eljabbar Madouri told Al-Monitor. “This is similar to what happened in 2014, when Ennahda, an Islamic party, allied with the secular Nidaa Tounes to remain in power.”

According to a 2014 study by the Carnegie Middle East Center, “After the 2011 revolution that ousted then president Zine el-Abidine Ben Ali, secular parties failed to form strong coalitions, develop regional networks, or create viable party platforms, often using anti-Islamist rhetoric to attract voters instead of offering solutions to Tunisia’s challenges.”

The paper argued, “The Islamist Ennahda party was illegal and harshly repressed under Ben Ali, but it has dominated Tunisian politics since his ouster. Now, secular parties are seeking greater prominence in Tunisia’s emerging political landscape.”

It added, “Since 2012, secular parties have profited from a deteriorating economic situation and the emergence of religious violence, which has led wide sectors of the population to fear unchecked Islamism. Members of the National Salvation Front (NSF), an alliance of secular opposition forces, blamed Ennahda for the assassinations of two opposition figures in 2013 [charges Ennahda has fiercly denied], which stoked the fires of anti-Islamism in the country.”