Turkey's Operation Peace Spring has made life ever more difficult for Syrian Christians, some of whom decided not to celebrate Christmas. 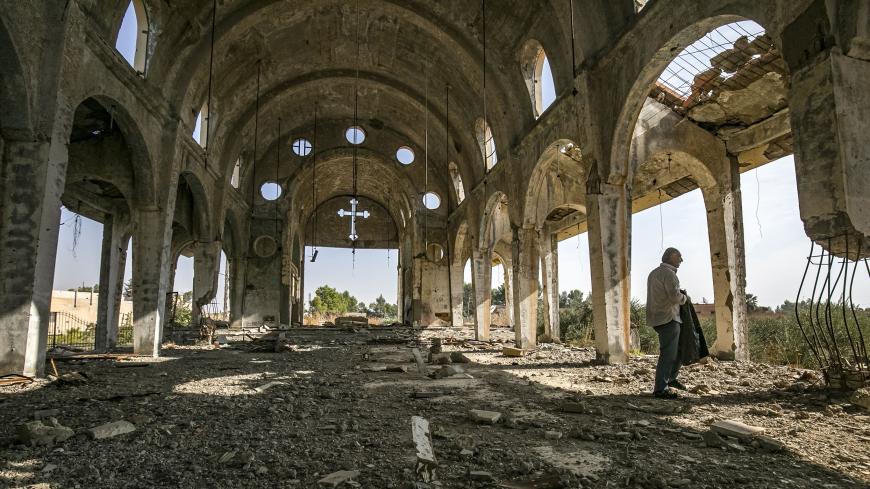 Sarkoun Selio, a 50-year-old Assyrian Christian Syrian and one of the few Assyrians still living there, walks in the ruins of the Assyrian Church of the Virgin Mary, which was destroyed by Islamic State (IS) group fighters, in the village of Tal Nasri south of the town of Tal Tamr in Syria's northeastern Hasakah province, Nov. 15, 2019. - DELIL SOULEIMAN/AFP via Getty Images)

KHABUR VALLEY, Syria — A Kalashnikov rifle slung over his shoulder, 21-year-old Ninos Akhtiar jumped into the back of a Toyota pickup truck with three other fighters from a Christian Assyrian militia. The vehicle drove through the northeastern Syrian town of Tal Tamr, bathed in a soft golden light.

As dusk approached, the surrounding countryside looked peaceful — but appearances are deceiving. The fields have become a no-man's-land and the Khabur River, a front line.

"Over there, it's the Russians. These are the positions of the Syrian regime. Here, the People's Protection Units [YPG, the Kurdish forces]. The Americans patrolled two days ago. And opposite to us, it is the Turkish-backed groups," Akhtiar, pointing his finger toward different villages, told al-Monitor.

A mischievous smile appeared on his youthful face: "It's like the World Cup!"

Akhtiar was 15 years old when he first took up arms and joined a self-defense group attached to the Kurdish forces. In the Christian valley of Khabur — his "homeland" — a long battle was waged against the Islamic State (IS). The self-proclaimed "caliphate" was finally driven out of the region and ended up collapsing in March with the recapture of Baghouz, the last shred of territory that was still under its control.

"With this victory, I thought we would finally be able to resume a normal life," he said. "Except that ..."

Except that on Oct. 9, Ankara launched Operation Peace Spring to dislodge from its border the YPG, which Turkey considers to be a terrorist organization linked to the outlawed Kurdistan Workers Party. This marked the beginning of a new internationalized conflict in the heart of Syria, which had already been battered by more than 8½ years of war.

The village of Umm al-Kayf is silent, except for the death rattle of a dying dog. Although 33 families used to live here before the war, most left when IS arrived, and two more when Ankara-backed militias advanced from the north. Now only three families remain. "We couldn't abandon our homes and fields, where would we go?” 55-year-old Nina Mosheh told al-Monitor.

Despite two cease-fire agreements, sporadic clashes continue. "Every night, we're woken up by the exchange of fire. We can't close our eyes until sunrise," Mosheh added.

Her son, Touma, pointed his finger toward the village’s church. The impact of mortar shells launched by IS were still visible on the facade. "After Daesh was defeated, we thought we could finally celebrate Christmas. Then suddenly there was another war," he told al-Monitor, using an Arabic acronym for the group.

This church is now abandoned. So, on Dec. 25, the Moshehs had to travel to Tal Tamr for the ritual Christmas mass.

Under a fog of incense, hundreds gathered inside the church. It is so packed because it is one of the last parishes still standing. "We haven't bothered to rebuild the destroyed churches because the villages are empty anyway," the Rev. Boghos Ichaiya told al-Monitor.

In Akhtiar's house, the empty chairs around the Christmas table welcomed neighbors and friends instead of relatives. "Our whole family is scattered across Europe, Canada, Lebanon and Australia," his mother, Jamila Akhtiar, told al-Monitor. The hemorrhage of Christians out of Syria is a sad but common story: Some estimate that more than 50% of the Christian population has found refuge abroad.

Of the approximately 20,000 original inhabitants of the Khabur River valley, only 1,500 are said to still be living there.

"A dead valley," lamented some residents. "You cannot find a girlfriend here," Ninos Akhtiar laughed. His smile disappeared as he looked at an engraving of the Last Supper hanging in the living room, on which he stuck pictures of his fallen brothers-in-arms, both Kurds and Christians. On the opposite wall is a portrait of the late Hafez al-Assad, the father of Syria's current president. "All of them fought for justice," the young militiaman said.

This shows how Christians are divided between supporting the government in Damascus or turning toward the self-administration led by the Kurds, less animated by ideological convictions than by the search for a sacrosanct stability. To leave or to stay, but under whose authority?

Following the withdrawal of US troops, the Kurdish leadership was left with little choice but to turn to Damascus to counter the Turkish offensive. For the first time since 2012, pro-government troops were redeployed in northeastern Syria, where the Kurds had succeeded in building their own de facto autonomous administration.

"We are happy to be back," a government soldier stationed in Umm al-Kayf told al-Monitor. "This is our land after all, and we will protect it from the Turks.”

The Rev. Antranig Ayvazian, apostolic administrator of the Armenian Eparchy of Qamishli, told al-Monitor, "I said to the Kurds: Be careful, the Americans are not going to sacrifice their relationship with Turkey just for your beautiful dark eyes. They should have listened to us. Instead, the population was sacrificed."

He repeated a well-known narrative according to which Syrian President Bashar al-Assad is the sole protector of minorities. Most Christians of all denominations interviewed by Al-Monitor said they supported the Syrian regime. However, some young men said they would rather flee than see it return in the region because of compulsory military service.

The current chaos is due, Ayvazian said, to the inability — the incompetence — of Kurdish forces to provide security. He cited as an example the slaying last month of Armenian priest Joseph Hanna Bedoyan, who was killed along his father as they were driving to Deir ez-Zor. The attack was claimed by IS.

Kurdish officials say that violence carried out by the terrorist organization’s sleeper cells has increased in recent times because of the great instability created by the Turkish offensive.

"The Kurds, the state, the Turks. ... In the end, we will not decide who will govern us," Yara Hanna, sister-in-law of the late Armenian priest, told al-Monitor "All we want is peace."

The family did not celebrate Christmas this year. This, they say, is a time of mourning.

Next to her, the matriarch of the family silently wiped away the tears running down her wrinkled cheeks. Since the double slaying, one of the priest's brothers has already packed up and jumped on a plane to Australia. Today, given the political instability and the grief that has struck her family, Hanna, too, dreams of exodus — but fears that she would only be contributing to the extinction of an already fragile Christian community.

"We have to stay, otherwise we will disappear," she insisted, her 1-year-old son sitting on her lap. "As long as the bells are ringing, we will resist.”