Intel: Top US and Russian generals link up to talk Syria

Gen. Mark Milley, the top US military official, met his Russian counterpart Gen. Valery Gerasimov in Bern, Switzerland, today as part of an ongoing high-level military dialogue between the United States and Russia. 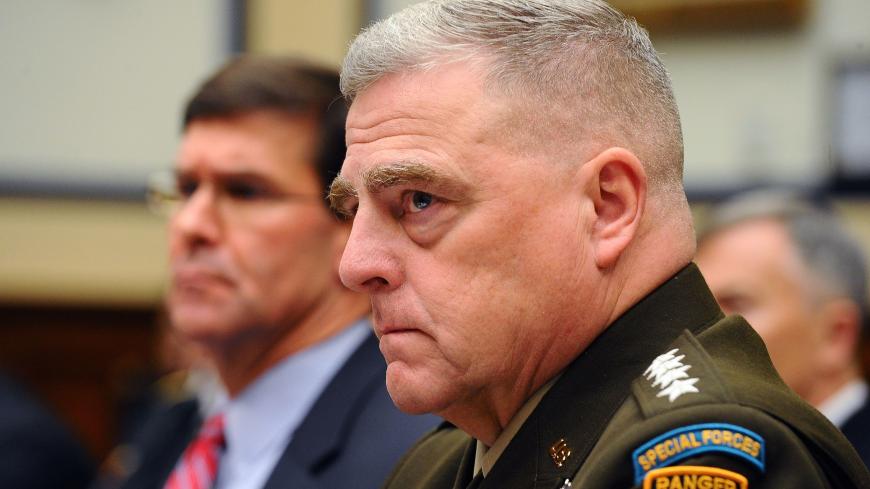 US Defense Secretary Mark Esper and Army Gen. Mark Milley, chairman of the Joint Chiefs of Staff, testify before a House Armed Services Committee hearing on "US Policy in Syria and the Broader Region," at the Rayburn House office building in Washington, US, Dec. 11, 2019. - REUTERS/Mary F. Calvert

Why it matters: The latest meeting between Milley and Gerasimov is a sign that the high-level channel, first set up under the previous US chairman of the Joint Chiefs of Staff, retired Gen. Joseph Dunford, will continue apace under new leadership at the Pentagon. Al-Monitor reported in October that the United States has deconflicted operations going after al-Qaeda and Islamic State (IS) leadership in Syria, including the raid that took the life of IS chief Abu Bakr al-Baghdadi with Russian forces, which control much of the airspace in Assad-held areas.

Statement: “The two military leaders discussed Syria, strategic stability and a variety of other operational and strategic issues to enhance deconfliction, improve understanding and reduce risk,” Joint Staff spokesperson Col. DeDe Halfhill said in a readout of the conversation. Halfhill said that other details from the conversation would remain private, in accordance with past practice.

Aid drying up: The United States has balked at Russian requests to supply aid to Assad-held areas, and with the American troop presence in the country thinning out, is unlikely to provide this assistance going forward. Al-Monitor reported earlier this month that all US aid programs in Syria (other than support to the volunteer White Helmets) is now running on foreign funds after the White House has not allowed $40 million in stabilization assistance to be released, over objections inside the administration.

What’s next: Russia is threatening to use its veto power at the United Nations to block a resolution allowing the flow of the world body’s aid into Syria, halving cross-border deliveries.

Know more: Russia is also concerned about the return of Chechen volunteers who went to fight for IS, Jack Detsch reports.