As Lebanon’s economic crisis devastates the housing sector, homeowners are faced with increasing payments and debt tied to the dollar and rising interest rates. 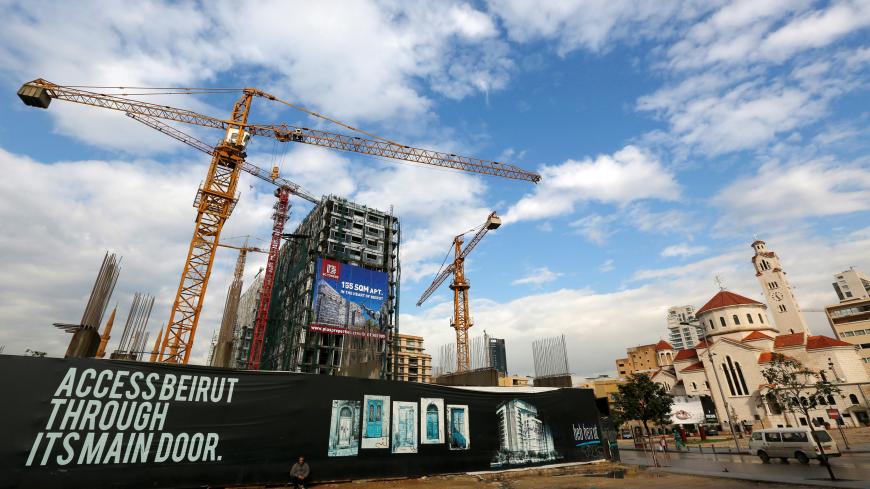 BEIRUT — “Our dream was to have a nice home so we could decorate the way we wanted,” Nour, not her real name, told Al-Monitor. “So we went searching for houses back in 2014.” A few blocks from where Nour sat at a Beirut cafe, protests over Lebanon's economic collapse and corruption among the country's ruling elite continued into their second month.

Nour’s husband Ahmed, also a pseudonym, told Al-Monitor, “I was working in Saudi Arabia at the time, and between my salary and hers, we could afford something nice.” The young couple entered the housing market just after a real estate boom, when the sector constituted more than 40% of all banking loans in Lebanon.

Ahmed and Nour, both architects, wanted to find the perfect house in which to start their family. They found it in the Metn district, outside Beirut, with a price tag of $500,000. Between their savings and some help from their parents, they put together the down payment of $200,000, and for the remaining $300,000, they turned to a Lebanese bank.

The bank told the couple that the loan would be at zero interest, and, “If there is a change in the interest, it will be $2 or $3, maximum $4, a month.” Nour would later remark, “We didn’t understand back then what was happening.”

One condition of getting such a mortgage loan was that they have at least $134,000 on deposit in the bank. To meet this requirement, it offered them another loan rolled into the original mortgage loan, bringing their entire loan to $434,000.

“For two years, our payment was fixed at about $1,200 a month, but that was okay,” Ahmed said. “I was still working in Saudi Arabia. The third year, they added $26 for each month. It was okay,... but we were surprised.”

The birth of the couple's first child made 2017 a memorable year for them. Unfortunately, so did Ahmed’s employer in Saudi Arabia going out of business and Nour's salary being reduced by 11% each month until it was cut in half. The rumblings of economic crisis were clear, and with them, their dream house was becoming a nightmare.

“In 2018, we went to the bank to sign the [annual] new schedule of payments, and we saw it would be $126 [extra] each month,” Nour said. In April the following year, the couple had an extra $500 a month added to their payment, leaving them with a monthly mortgage debt of nearly $2,000, and no knowledge of why it was happening.

To make matters worse, their loan was in dollars, to which the Lebanese pound is pegged. At the initiation of the mortgage, the pound traded at the official rate of 1,507.50 to the dollar. With the economic crisis, although the official exchange rate remained pegged at 1,507.50, trading was recorded at 2,350 pounds to the dollar in late November. As dollars became increasingly scarce, banks faced liquidity problems and could no longer provide customers access to their deposits.

Informal capital controls have been put in place, and under them, Nour and Ahmed can only access $500 a week, making their monthly $2,000 house payment — which they usually pay in cash as the fee on bank transfers has risen — even more difficult.

“This year we were so angry,” Nour said. “We went to the bank so many times, saying, please, someone explain this contract to us. We were not aware of what we had signed. Finally they explained the BRR.”

The Beirut Reference Rate, or BRR, is a reference for lending currency introduced in 2009 and the basis for some mortgage interest rates. In 2014, when Ahmed and Nour obtained their loan, the BRR stood at just under 6%. It has since jumped to more than 10% due to the crisis. The BRR is largely set by the Association of Banks, a trade group working for the interest of the banking sector. It determines the BRR based on risk factors and international lending and interest rates.

Nour and Ahmed cannot afford loan payments under the new rate and have not paid their December bill, instead prioritizing their child and essentials.

Jihad el-Hokayem, a financial market strategist, predicted the current situation following the decline in oil prices in 2014. “Between 2007 and 2011, you had a real estate surge,” he noted, attributing it to Gulfis, Lebanese expatriates and some locals.

Hokayem explained that when oil prices fell, Gulf investors withdrew from Lebanon, and the flow of expatriate money slowed, resulting in a real estate glut. With major Lebanese political figures either owning construction companies or having close relationships with them, and with real estate accounting for 15% of Lebanon's gross domestic product, interest in sustaining this lucrative sector ran high in influential circles.

As part of the effort to prop up the real estate sector, in 2013 the government issued subsidies for housing loans. The cap, however, was set as high as $800,000.

“Why not [reduce the cap] and divide [the difference] between four people?” Hokayem wondered. With a lower cap, more people actually needing assistance would be able to benefit from the subsidy.

The new housing being built was expensive with the average value of real estate more than doubling in 10 years, from $48,000 in 2007 to $103,000 in 2017. This contributed to reducing local demand, thus houses staying on the market, including by 2018 approximately $9 billion worth of empty, predominantly luxury, apartments.

This glut might soon begin to be reduced as people with excess cash on hand nervously look around for relatively more secure places to park or invest their money than banks struggling with liquidity problems. In this regard, Hokayem said, banks may start offering the collateral of non-performing housing loans instead of cash to depositors, leading to an “artificial bounce.”

Put another way, lower- and middle-income families who default on mortgages will find their bank auctioning their home at a reduced rate to investors looking to secure their money. Local banks contacted by Al-Monitor would not comment on this practice or on the number of home loans and defaults since 2017.

Hokayem also said that people might begin selling their land at cheap prices to secure dollars from abroad. He asked rhetorically, “If you tell someone in desperate need to pay his children's school fees that you will give him cash from outside Lebanon for his land, how much of a discount will they give you?”

This route of course only works for people who already have money. With the income share of Lebanon's top 2% equalling that of the bottom 60%, that is a select few. For Ahmed and Nour, it means they will likely lose their home and savings.