A renewed debate on crisis mismanagement is gripping Iran after four patients died at a hospital's Intensive Care Unit due to a power blackout caused by lightning and heavy downpours. 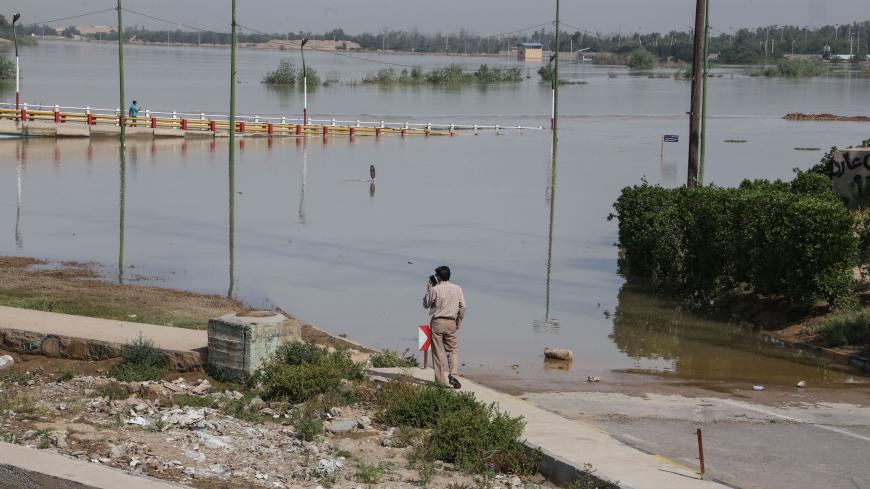 This picture taken on April 11, 2019, shows trees partially submerged by water from floods in Ahvaz, the capital of Iran's southwestern province of Khuzestan. Ahvaz was flooded again this week. - ATTA KENARE/AFP via Getty

Much of the southwestern Iranian city of Ahvaz remains inundated by floodwater after being struck with nearly four hours of heavy downpours earlier this week. The Shahrvand newspaper said rain of up to 80 millimeters (3.1 inches) Dec. 17 thrust the city in a state of lockdown, disrupting nearly all public services and prompting a closure of schools, banks and the city's main airport.

The intense showers also triggered an uncontainable release of massive sewage onto streets and homes in a city where officials say the rusting sanitation network is no longer capable of passing on massive rainwater. The city's mayor declared a state of "crisis" as pictures of chaotic scenes, residents submerged in water and makeshift boats sailing across neighborhoods went viral.

"Inundated by mismanagement" read the title of a stinging editorial on the front page of Reformist daily Ebtekar. Similar headlines covered newsstands and a debate on the Iranian government's perceived inadequate response to natural disasters resurfaced.

Yet beyond the disruption and damage, what fanned the fury was the shocking news coming from the city's Imam Khomeini Hospital. Four elderly women in the intensive care unit died after an electricity outage caused by lightning shut down their ventilators, which were connected to malfunctioning emergency power generators. Hospital authorities have confirmed the deaths and the Iranian Ministry of Health is now investigating the incident. This is "management characterized by imprudence," wrote one user on Twitter after the city mayor sought in vain to placate the public anger, saying those who died were already in "terminal condition."

The patients' deaths came along another horrifying episode in the city's two major universities in what has been described as a "chain of mystery deaths." Since late November, the bodies of at least four students have been recovered in various locations, including one hung from a tree outside his dormitory. University officials have yet to uncover the details amid much unconfirmed speculation.

It was not clear if the student deaths had anything to do with the recent deadly crackdown on angry protests that quickly spread across Iran following a government announcement of higher gasoline prices. But Ahvaz and a few other cities in the oil-rich but impoverished Khuzestan province witnessed some of the deadliest scuffles. In the flashpoint city of Mahshahr alone a "massacre" of still unknown dimensions reportedly took place, with scores believed to have been shot dead.

While the government continues to ignore calls to release its official count, an Amnesty International report has confirmed at least 304 deaths nationwide, a significant number of them in Khuzestan, an underdeveloped province plagued by decades-long government neglect, widespread unemployment and destitution.