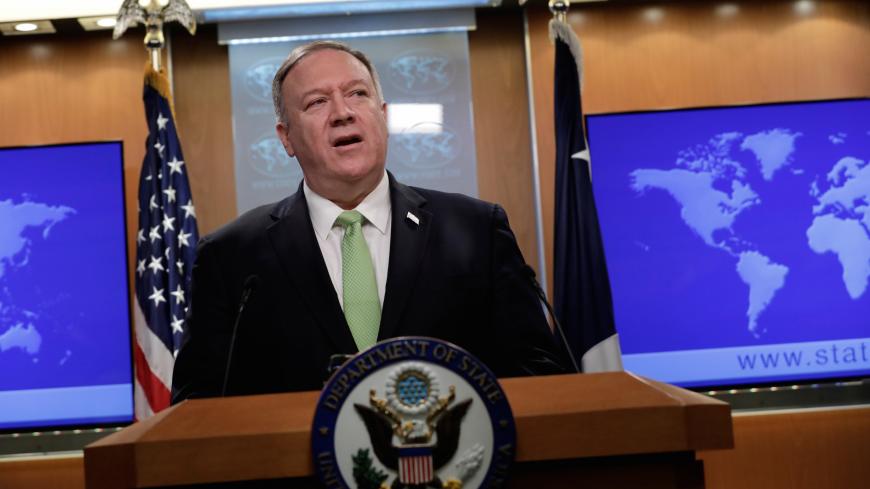 US Secretary of State Mike Pompeo makes a statement to the press at the State Department in Washington, US, Dec. 11, 2019. - REUTERS/Yuri Gripas

The money laundering designations come a day after Bloomberg reported that Secretary of State Mike Pompeo personally intervened to release $115 million in economic aid to Lebanon that had been delayed for a month at the behest of Hezbollah hawks in the Donald Trump administration and Congress. And earlier this month, the White House released $105 million in Lebanese military assistance after a months-long hold.

Why it matters: The on-again-off-again aid holds are sending mixed messages to Beirut amid the country’s worst economic crisis since the civil war. Lebanese protesters continue to demand that the country’s political old guard step down, including Hezbollah and its allies.

While today’s sanctions and Pompeo’s stated support for the protesters indicate that the United States is still committed to squeezing Hezbollah financially, the aid meddling sheds light on the divide within the Trump administration between hard-liners and those who believe that the assistance bolsters Lebanese institutions against the Shiite paramilitary group’s influence.

Behind the scenes: Bloomberg reported that USAID deputy administrator Bonnie Glick delayed the economic aid after consulting with deputy national security adviser Victoria Coates and Hezbollah hawks in Congress. Coates used to serve as the national security adviser for Sen. Ted Cruz, R-Texas, who has introduced legislation cracking down on Lebanese assistance. Undersecretary of State for Political Affairs David Hale sought to continue the economic aid, ultimately winning out when Pompeo told Glick to release it.

What’s next: Cruz and Rep. Lee Zeldin, R-N.Y., are still trying to get Congress to advance their legislation to condition some military aid to the Lebanese Armed Forces based on its efforts to weed out Hezbollah’s influence and disarm the paramilitary group. Meanwhile, caretaker Prime Minister Saad Hariri is in touch with the World Bank and International Monetary Fund as he seeks to secure loans despite all the economic turmoil.

Know more: Keep up to speed with the Lebanese protests on Al-Monitor: Sam Brennan has the lowdown on how demonstrators want to change Lebanon’s archaic legal system. And read Pentagon correspondent Jack Detsch’s report on the White House’s decision to release the $105 million hold on Lebanese military aid earlier this month without providing any explanation to Beirut or Congress.