Turkish President Recep Tayyip Erdogan dropped his threat to block a defense plan for the Baltic states and Poland, though disagreements persist among NATO allies. 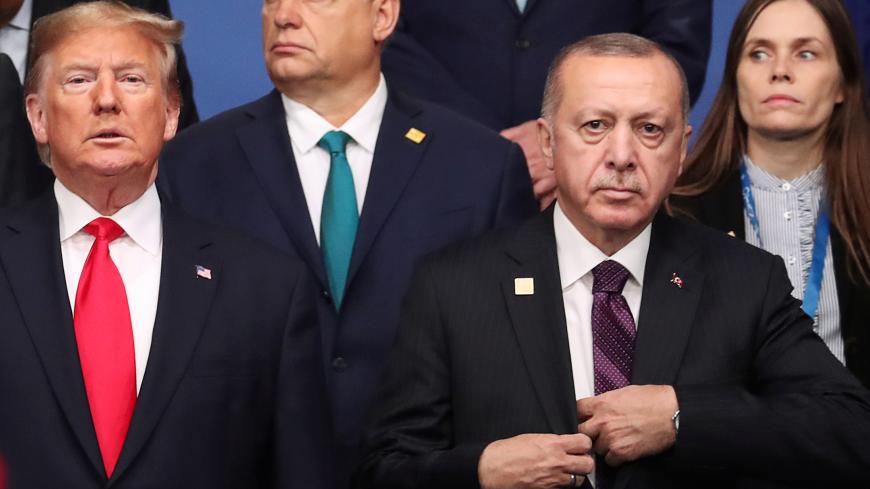 As a NATO summit defined by discord, name-calling and accusations came to a close Wednesday, an unexpected show of unity took shape as Turkish President Recep Tayyip Erdogan reversed his stance on a previous threat to block resolutions during the meeting.

Ahead of the two-day London gathering, the Turkish leader said he would hold up NATO defense plans for Baltic states and Poland if allies did not designate the US-backed People’s Protection Units in Syria as a terror organization.

NATO Secretary General Jens Stoltenberg announced that Erdogan had withdrawn the ultimatum late Wednesday. In a joint statement, member states reaffirmed their commitment to the alliance, saying, “Terrorism in all its forms and manifestations remains a persistent threat to us all.”

In a closing press conference, Lithuanian President Gitanas Nauseda said the Turkish leader did not impose any demands in return for his support of the NATO plan.

“No one demanded anything from us for this,” Nauseda said. “We all thanked President Erdogan for his solidarity.”

The development, along with the final communiqué despite earlier reports one may not have been released, were positive developments in an otherwise rocky summit marked by disagreements among allies. Still, as NATO leaders return to their nations, a myriad of unresolved issues will continue to foster distrust between Turkey and some member states.

Sinan Ulgen, chairman of the Istanbul-based Center for Economic and Foreign Policy Studies, noted that Macron’s statements along with Trump’s messages of limiting support strictly to nations that increased defense expenditures were “not the type of rhetoric that we usually see” in NATO summits.

“In general, these meetings are orchestrated to reflect a positive image of the alliance, where statements tend to underline the successes of the alliance,” Ulgen told Al-Monitor.

Ulgen added the outcome of the summit remains to be seen as only sparse details were revealed from a four-way meeting on Syria Tuesday between Erdogan and the leaders of the United Kingdom, France and Germany.

“The statements coming out of the meeting are very inconclusive,” Ulgen told Al-Monitor. “Everyone said it was a good meeting, but the way it was structured — only one hour for four leaders talking by way of translation — it’s difficult to imagine that there was any real progress on those issues apart from each side reiterating their talking points.”

Turkey also continues to face US sanctions for its S-400 purchase under the 2017 Countering America’s Adversaries Through Sanctions Act. Speaking to reporters Tuesday, Trump said he was looking into whether to impose sanctions, incorrectly placing the blame for Turkey’s Russian missile acquisition on former US President Barack Obama.

“Turkey for a long period of time wanted very much to buy the Patriot system,” Trump said, adding that Obama wouldn’t sell it. Though Ankara had expressed interest in the US-made missile defense system, the purchase was stalled due to Turkey’s demands for a technology-sharing agreement, which the United States denied.

Meanwhile, in Washington, lawmakers have advanced multiple bills that would sanction Turkey for the S-400 purchase. Speaking Tuesday, Sen. Jim Risch (R-Idaho) said he planned to bring sanctions legislation he introduced with Sen. Bob Menendez (D-N.J.) for a vote next week.

In a subsequent meeting with German Chancellor Angela Merkel, Trump said the sideline talk with Erdogan was “very good.”

“The border and the safe zone is working out very well and I gave a lot of credit to Turkey for that,” Trump said, adding a cease-fire brokered between Turkey, the United States and Russia in northern Syria was “holding very well.”

Despite the positive statements, many bilateral issues remained between Ankara and NATO allies regarding the Syria operation, ongoing gas-drilling activities Turkey is conducting near Cyprus and a recent maritime boundary agreement signed between the Turkish leader and the UN-recognized government in Libya.

At the tail end of the summit, Erdogan met with Greek Prime Minister Kyriakos Mitsotakis, who said he would condemn the Turkey-Libya accord for violating international laws on maritime borders. Mitsotakis sought support from NATO allies in addressing Ankara’s activities in the eastern Mediterranean Sea, but speaking Tuesday, Stoltenberg said the alliance would not take part in the process of resolving issues between Greece and Turkey.

Reacting to the column, Asli Aydintasbas, a senior fellow at the European Council on Foreign Relations, said the claim reflects multiple layers of Turkey-NATO tensions, some of which are more reflective of inter-institutional tensions as opposed to Turkey’s unilateral actions.

“[Karagul] may not be reflecting Ankara’s policies, but he does reflect the thinking in Ankara,” Aydintasbas told Al-Monitor. “There is still the sense that the [2016] coup, if it succeeded, would have been supported by the West, and that hasn’t changed … I don’t think there’s any trust on the Turkish side.”

“So what we’re doing now is pretending this is not the case,” Aydintasbas continued. “These differences that pop up on Syrian Kurds and the Baltic states … are a reflection of a deeper mistrust. I’m not defending it, but … the reason they bought S-400s is because they felt they could not trust NATO countries.”