Egypt’s Central Bank has launched a funding initiative to help defaulting factories deal with their debt and bolster production. 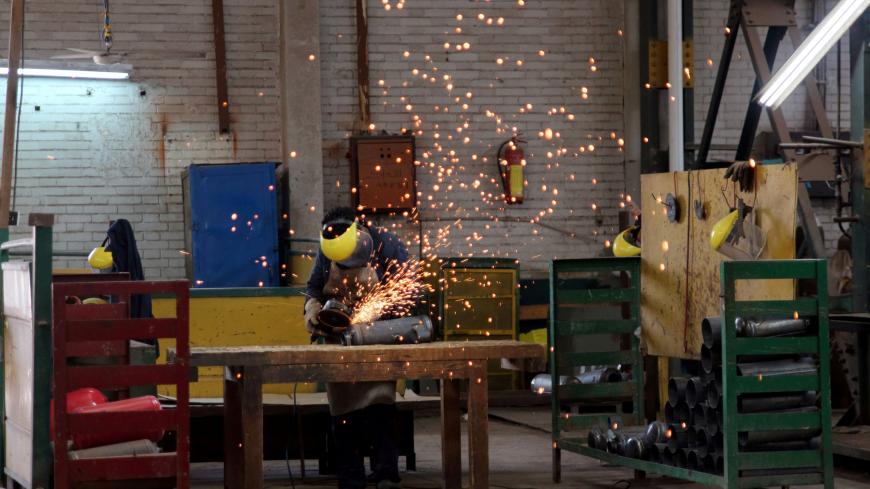 A worker is seen at the Helwan Company for Engineering Industries (Factory 99) in Cairo, July 6, 2017. - REUTERS/Stringer

Egypt’s business community is keeping its fingers crossed that a recently launched funding initiative will prove to be a life raft for the country’s industrial sector. To help bolster industry, Prime Minister Mostafa Madbouly on Dec. 4 announced a program to make available 100 billion Egyptian pounds (around $6.2 billion) at a reducing balance rate of 10% to assist struggling businesses with their debt. While local industrialists welcomed the move, economists are urging authorities to proceed carefully.

“In principle, the initiative is a good move toward encouraging industrialists,” Amr Abol-Enein, managing director of CI Capital Asset Management, told Al-Monitor. “It will finance working capital for the defaulting factories, but each case of default should be well examined by the banks prior to being offered a lifeline. We should differentiate between firms that stopped loan repayment due to the country’s overall economic conditions and factories that are in default because of mismanagement.”

The initiative includes debt relief that covers interest in arrears totaling 31 billion pounds (around $1.92 billion) for 5,148 factories. The targeted industrial firms are defaulting on principal loans worth 6 billion pounds (around $373 million), according to a statement by the Central Bank of Egypt (CBE). The crux of the initiative is that defaulting firms pay off 50% of the original principal of a loan, receive exemption from interest past due and then pay the remaining 50% of the loan at the reducing balance rate, that is, an interest rate calculated on the outstanding loan amount on a monthly basis (as opposed to a flat rate, which is calculated on the original principal).

Abol-Enein said the repercussions of the 2011 uprising continue to affect Egypt’s business climate, and many factories have been hampered by the economic instability. “Higher interest rates following the currency float in November 2016 have also made it difficult for factories to get loans at low rates,” Abol-Enein asserted. The CBE floated the pound in November 2016 in accordance with obtaining a $12 billion loan from the International Monetary Fund.

Abol-Enein argues that the initiative should only benefit factories that have been affected by economic turmoil after 2011. “The economic instability has been a force majeure for many factories, but not all of them deserve a lifeline,” he remarked, emphasizing, “It would be a waste of money to reward mismanagement.”

“The initiative will also benefit banks, which will collect on some [transactions] considered to be non-performing loans,” Abol-Enein further noted.

On Dec. 8 at an Arab banking conference in Cairo, CBE Governor Tarek Amer called shoring up the industrial sector a “fundamental priority” and cited the subsidy initiative for factories in default. Amer said that since 2011, the banking sector had approved loans totaling around 432 billion pounds (around $26.86 billion) to some 182,000 industrial firms.

Beltone Financial, a Cairo-based investment bank, said in a Dec. 7 research note that the new funding initiative would boost capital spending by the end of 2020, citing private sector-led investment growth. Beltone expects Egypt’s Purchasing Managers Index (PMI) to improve by the second half of 2020.

IHS Markit, a London-based global information provider, announced on Dec. 3, “[Egypt’s PMI] — which is a composite gauge designed to give a single-figure snapshot of operating conditions in the non-oil private sector economy — fell to 47.9 in November, from 49.2 in October, to indicate a further decline in operating conditions that was the quickest since September 2017.” Among the determinative operating conditions are new orders, production and inventory levels, supplier deliveries and employment.

“With demand falling at a sharper rate, many Egyptian firms sought to stimulate sales with a reduction in output charges. The overall decline was the quickest in the series history, and contrasted with a modest uptick in October,” IHS Markit reported.

Egypt's funding initiative is expected to boost demand for input materials, Karam Ibrahim, owner of a textile factory in Kafr al-Dawar, north of Cairo, told Al-Monitor. “Demand has slowed down in general,” he said. “As for textiles, the government should combat dumping. The prices of imported raw materials shot up after the pound flotation. My turnover declined by almost 50%. I had to shut down one of my two production lines.”

Ibrahim further asserted, “The initiative will certainly help in the medium term as I could reschedule my debt to the banks. However, the real solution in my opinion is to support national industrialists in the face of unfair competition with foreign products inundating the local market.”

Ibrahim would like to see higher tariffs on imported products that have locally made competition. “The private sector has so many advantages to offer if the government gives it a fair chance,” Ibrahim said. “It creates jobs and pushes economic growth forward. Therefore, the local manufacturers cannot be left alone in the face of dumping. This is unfair.”

Tamer Eid, who owns a plastics factory in Cairo, agreed with Ibrahim in urging officials to stand by local industrialists. “I could easily liquidate my factory and open a hypermarket [a retail store selling groceries], but I’m an industrialist,” Eid told Al-Monitor. “The progress of any nation is measured by the advancement of its manufacturing sector.”

As for the government program to assist defaulting factories, Eid asserted, “The initiative will help us repay the bank loans, but we need to make sure that the local industrialists are well protected against market instability and dumping.”