For many Gazans, it's another Christmas barred from Bethlehem

While most of Gaza's Christians submitted requests to celebrate Christmas in Bethlehem, only a small number were granted access by Israel. 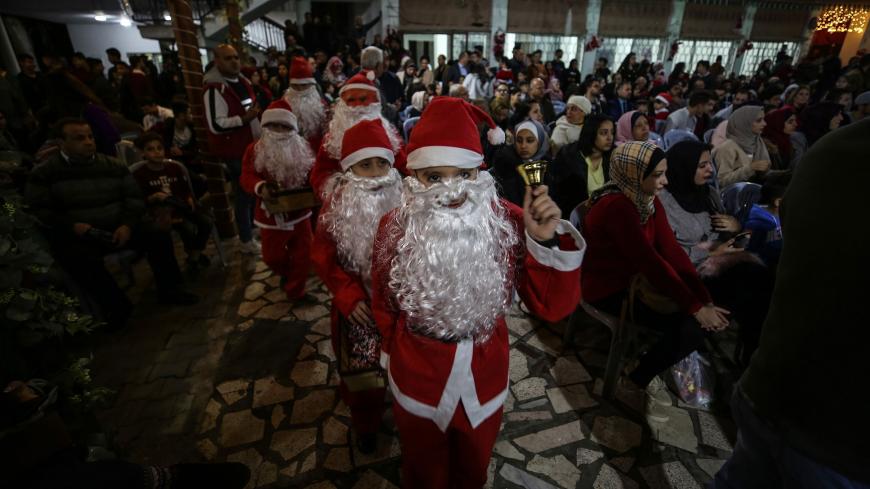 Children in Santa costumes march in a procession at a Christmas gathering in Gaza City, Gaza, Dec. 3, 2019. - Mustafa Hassona/Anadolu Agency via Getty Images

RAMALLAH, West Bank — Up until Dec. 23, Samer John Terzi was still hoping to fulfill his kids’ wish of celebrating Christmas at the birthplace of Christ. Every year, Israeli authorities have prevented Terzi and many other Christians from Gaza from visiting Bethlehem at this time of year, citing security reasons.

An estimated 850 to 1,030 Christians reside in Gaza, and those wishing to visit Bethlehem must apply for permits through the Israeli Civil Administration overseeing the West Bank. Kamel Ayyad, head of public relations for the Orthodox Church in Gaza, cited the larger number of Christians, while Hanna Issa, secretary-general of the Islamic-Christian Commission in Support of Jerusalem and Holy Sites, provided the smaller figure. According to Issa, the discrepancy likely stems from including Christians of non-Palestinian origins who live in Gaza.

Ayyad said that his church had received the list of people allowed to visit Bethlehem, and of the 950 requests made, 217 were approved. The list, however, did not include a single complete family, Ayyad claimed. The names, he said, had been approved randomly, which means that many of those who received a permit will not be able to use it. Neither Terzi’s name nor those of his three small children — John, Jack and Lamita — was on the list.

“Christians from all over the world visit Bethlehem to celebrate Christmas while we, the people of this land, are denied access to it,” Terzi said.

In 2016, John, Jack and their mother managed to visit Bethlehem, but Samir was denied a permit. In 2017 and 2018, the three kids were given permits, but their parents were not. “Last year, when we received our children's permits, it was a bit like a joke,” Terzi said. “Lamita was two years old, and she got permission to go to Bethlehem without us.”

“There are only a few Christians in Gaza, and try as we may, Christmas won't be as nice as in Bethlehem or any of the foreign countries to which our relatives migrated,” Terzi said. “The kids always ask us why we don't celebrate with our relatives.”

Last year, 500 permits were issued just before Christmas, but half of them were either for old people, including some in need of assistance to get around, and children under 16 years of age whose parents were not granted permits, virtually guaranteeing that they would not be able to make the journey to Bethlehem.

Approved Catholics and other Christians in Gaza who celebrate Christmas on Dec. 25 and those of the Orthodox branch of the faith, who celebrate the holiday on Jan. 6, are issued permits typically valid for the span of the two holidays. Palestinians lucky enough to obtain a permit are allowed to exit Gaza through the Erez crossing, which like Gaza's other points of entry, is controlled by Israel, to travel over land to the West Bank.

On Dec. 13, Israel Public Broadcasting cited Kamil Abu Rokon, commander for Coordination of Government Activities in the Territories, as saying that rejection of Gaza Christians’ requests to enter the West Bank would be based on security reasons.

“We condemn the security pretexts Israel is resorting to,” said Ayyad. “How can such a large number of requests be rejected for security purposes? What are the security arguments that prevent religious men, old people, women and children from performing their religious rituals on their holiest days in Bethlehem, which is barely two hours from the Gaza Strip?”

Asked about the steps taken by the church to pressure Israel in this regard, Ayyad said he had been in contact about next steps with the Supreme Committee for Churches Affairs, a body created by the Palestinian Authority to protect church interests in Palestine, and the leaders of the Orthodox Patriarchate in Jerusalem. He also said that some human rights institutions, including the Israeli NGO Gisha – The Legal Center for Freedom of Movement, have intervened.

Ayyad said that Christmas and Easter are the only Christian holidays Israel recognizes and during which it grants Christians entry permits to Bethlehem. “We tried to visit Jerusalem on St. George’s Day last November and on St. Mary’s Day in September, but there was no cooperation at all,” he said. For Easter last April, only 300 out of more than 1,000 requests to visit Jerusalem were approved.

Issa noted that the obstacles in the path of Christians in Gaza to reach places of worship contradict the Universal Declaration of Human Rights and the freedom of individuals, be they Christians or Muslims. He said his commission is deploying efforts to allow more Christians to obtain permits.