Algeria’s protesters view the current trial of figures linked to the former regime as a charade that some in power are using to settle personal accounts. 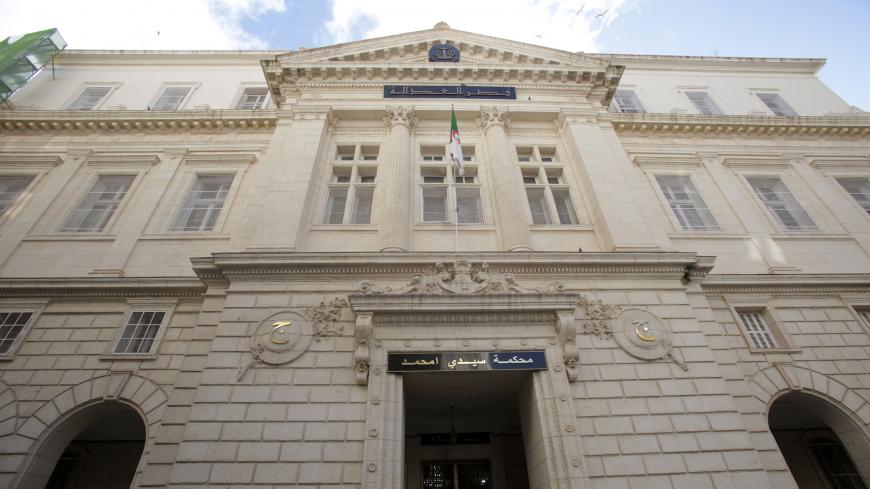 A general view of the Sidi M'Hamed Tribunal Court where the trial of senior officials, including two former prime ministers, is being held, in Algiers, Algeria, Dec. 10, 2019. - REUTERS/Ramzi Boudina

For the first time since the outbreak of Algeria’s protest movement in February, several former senior officials and prominent businessmen close to former President Abdelaziz Bouteflika and his circle have been prosecuted on corruption charges and convicted to stiff prison sentences after a speedy four-day trial started Dec. 4.

The hearings marked a historic event, given that it is the first time since Algeria’s independence in 1962 that former heads of government have appeared before a court. Yet the credibility of the process, pushed by a ruling elite led by the military and largely regarded as illegitimate, has been challenged by many among the protesters, or Hirak, who consider it a charade.

“The gang [ruling elite] has no credit to launch such a demagogic and populist operation, [and] … the Hirak have not been fooled and have considered that this campaign is not credible and will not be effective at all,” Djilali Hadjadj, founder and spokesperson of the Algerian Association to Fight Against Corruption, told Al-Monitor.

The cases under investigation concerned the granting of undue privileges to the automobile sector during the fourth mandate of Bouteflika, and the funding of his electoral campaign for a fifth term. The former prime ministers, Ahmed Ouyahia and Abdelmalek Sellal, were among the prosecuted officials, which included several former ministers, and received prison sentences of 15 and 12 years, respectively. The former minister of industry, Abdessalem Bouchouareb, who was at the heart of the scheme and is now on the run abroad, received the harshest sentence of 20 years. The lawyers of the defendants, who have boycotted the hearings, condemned the trial as political and a circus, and have rejected the charges.

The case of the automobile assembly plants exposes the close relationship that state officials and businessmen had forged during Bouteflika’s reign. About five years ago, and encouraged by the dynamism of the lucrative automobile market in Algeria — one of the largest in Africa — the authorities set plans to develop a national car assembly industry.

To this end, the government approved a number of incentives, including subsidies and tax, customs and land benefits, and relied on projects led by partnerships between foreign companies and local groups often owned by businessmen close to the president.

The prosecutor concluded that some businessmen had actually set up front companies, that a car assembly industry was never developed, and that the cost of the scheme exceeded $1 billion. Some of these businessmen would later appear among the main donors of Bouteflika’s last election campaign in 2019.

“What distinguished Bouteflika’s reign from earlier administrations was his reliance on private businessmen who had very worky relations with his own campaign finance while receiving very lucrative deals from the state,” Hannah Armstrong, an International Crisis Group consulting analyst on Sahel and an expert on Algeria, told Al-Monitor.

“Corruption during the reign of Bouteflika and his band reached disturbing proportions, gangrening all the institutions of the Republic,” said Hadjadj, who has been monitoring corruption in Algeria for two decades. “Under Bouteflika, corruption was established as a large-scale business and became an instrument of power and for the power.”

The businessmen prosecuted in the automobile assembly plants case included some of the most prominent in Algeria, such as Hassan Larbaoui and Ahmed Mazouz. Alongside them, businessman Ali Haddad, founder and CEO of one of Algeria’s largest private companies, the Road, Hydraulic and Building Works Company, and former head of the main employers’ organization of the country, the Business Leaders Forum, was also investigated as the mastermind of the secret funding of Bouteflika’s campaign.

Yet despite the names on trial, the judicial process received little attention from the protesters, who are now focused on the controversial, army-backed presidential election set for Dec. 12 and largely perceived as a stratagem of the ruling elite to rebrand itself. For many, the trial was nothing more than another show pretending winds of change.

“The peculiarity of this process is that it’s selective,” Mustapha Atoui, president of the Algerian National Association Against Corruption, told Al-Monitor. “Those condemned have been chosen, and [the trial] was limited to some of the most hated figures of Bouteflika’s regime,” he said.

“Many people would like corrupt business elites and politicians to be held accountable, but the form that these trials are taking and their timing [created] a real sense that this is not about any genuine establishment of accountability but [rather] an appearance of punishing corruption without actually dealing with the substance of it,” Armstrong said.

Since the first demonstrations of the Hirak more than nine months ago, the fight against corruption — which is perceived as very high among protesters — has been among its main demands. Seizing the assets of prominent businessmen linked to the Bouteflika entourage is also among the most popular demands of the protest movement.

But the lack of confidence in the entire system, including the judicial authorities — which have been an active part of the repressive machine of the regime, particularly in the court of Sidi M’hamed — prevents justice from being done in the eyes of many Algerians.

“Instead of being a power that combats corruption, the Algerian justice has become a means of repression,” Atoui said, noting that the secretary-general of the Algerian National Association Against Corruption is among the dozens who have been arrested in the country since the regime stepped up repression in recent weeks.

“For Algerians, these trials are a simple distraction from the more serious issue: the dismantlement of the political system and the removal of all those associated with the Bouteflika clan, including the current rulers,” Yahia Zoubir, director of research in geopolitics and professor of international studies and international management at Kedge Business School, told Al-Monitor.

At the same time, the trial has also been considered a continuation of the power struggle within the regime that broke out following the fall of Bouteflika. Dozens of current and former officials and businessmen close to him have fallen from grace ever since, and the army has openly emerged as the main political player in the country.

On Sept. 25, Said Bouteflika, the brother of the former president; two former intelligence officials, Mohamed Mediene and Athmane Tartag; and the secretary-general of the Workers’ Party, Louisa Hanoune were sentenced to 15 years in prison for “conspiracy against the authority of the state” and “undermining the authority of the army.”

“[The corruption trials] raise a number of questions,” Zoubir said. “Why are other individuals whose corrupt practices are irrefutable still in the current government? And more importantly, why are they still holding important ministries?” he wondered, adding, “Since there are no answers to these questions, the obvious one is that this is about one group settling accounts with another clan.”

For Atoui, the only effective way to address corruption is through support for a democratic change: “The fight against corruption inevitably involves the establishment of a democracy, and the end of the primacy of the military over politics.”