Turkey’s fight against IS riddled with black holes

Ankara may boast about how many Islamic State members it has captured, but its handling of IS suspects on the ground, especially in deportation centers, speaks of a slipshod attitude to the problem. 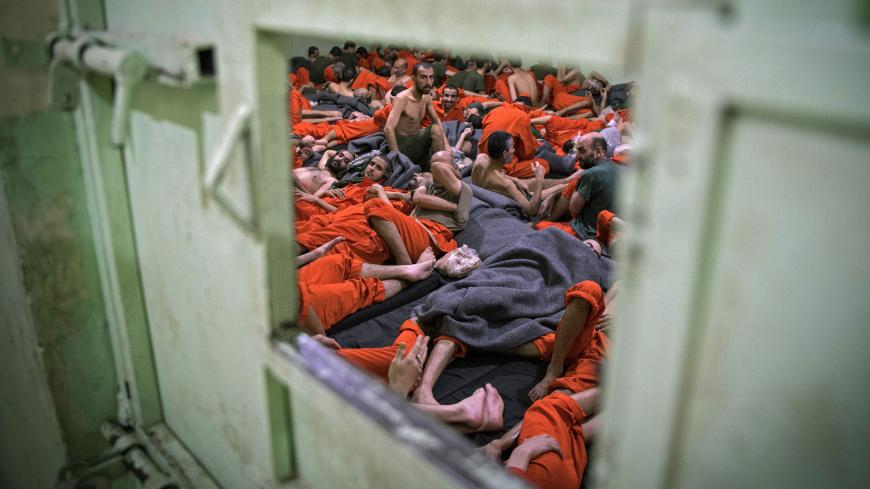 Men suspected of being affiliated with the Islamic State (IS) are gathered in a prison cell in Hasakah, Syria, Oct. 26, 2019. - FADEL SENNA/AFP via Getty Images

Soon after the US raid that led to the death of Islamic State (IS) leader Abu Bakr al-Baghdadi right under Turkey’s nose, Ankara embarked on a busy hunt for militants — almost as if to mask some guilt — but the black holes in its fight against terrorism are exposing themselves.

Amid lingering questions on how Baghdadi was able to hide just several kilometers from the border in an area watched by its military and intelligence, Turkey has detained dozens of suspects in its abrupt onslaught on IS cells. The raids, however, have led many to wonder why the authorities waited until now if they were aware of the locations.

On Nov. 4, officials announced the capture of Baghdadi’s sister, Rasmiya Awad, along with her husband, daughter-in-law and five children in the Turkish-controlled Syrian border town of Azaz. President Recep Tayyip Erdogan’s communication chief hailed the arrests as “yet another example of the success of our counterterrorism operations.”

Erdogan broke more news the following day. “Baghdadi killed himself in a tunnel," he said. "And we had captured his wife, but we did not make a fuss about it. I’m announcing this for the first time today.”

What Erdogan was announcing had been kept from the public for more than a year. As it turns out, Baghdadi’s first wife, Asma al-Qubaysi, was detained in June 2018 in the border region of Hatay along with 11 adults and children that included Baghdadi’s daughter Leila Jabeer.

Erdogan said the detainees had been sent to deportation centers. According to Interior Minister Suleyman Soylu, some 250 IS-linked individuals are being held in deportation centers in Turkey. Another 1,180 are in prison. IS elements captured in Ras al-Ain and Tell Abyad since the launch of Operation Peace Spring Oct. 9 will be held in the Turkish-controlled Euphrates Shield region before being deported to their home countries. They are said to number about 850.

Ankara’s announcements aimed to show how determined Turkey is in the fight against IS, but they raised further questions. According to a senior Turkish official, the recent captures offer “an intelligence gold mine” on how IS works. Then why are those being held in deportation centers and not under formal investigation? Why are IS suspects not put on trial, given that Turkey sees IS as a terrorist group and has been the target of bloody IS attacks? How long have those people been held in deportation centers? Could it be that they were living in normal homes until recently and taken to deportation centers only after Baghdadi’s death to dispel the suspicions over Turkey?

Deportation centers are meant to hold foreigners who have violated the passport law, overstayed their visas or present a security risk, pending deportation. They are not prisons. In terms of contact with the outside world, including telephone use and face-to-face meetings with relatives or lawyers, those in deportation centers are subject to flexible conditions. The period of holding a person in a deportation center is limited to six months, which can be extended to one year at most to allow for the completion of legal procedures. The person must then be removed from the facility. Hence, Qubaysi should have been released or delivered to Iraq in June at the latest, if she had been held in a deportation center. The picture that emerges brings to mind allegations that Ankara promised that IS families would be free to take refuge in Turkey as part of a deal to secure the release of 49 hostages snatched by IS at the Turkish Consulate in Mosul, Iraq, in 2014.

The black holes in Turkey’s fight against IS manifest themselves in the deportation process in particular. A lawyer who has represented two IS members from the Caucasus recounted his experience to Al-Monitor. His clients were put in a deportation center after being caught in Gaziantep, a province bordering Syria. The deportation procedures were halted through an appeal to a court, resulting in the release of the pair after a year.

Asked why the authorities preferred to hold such suspects in deportation centers, the lawyer said, “They are not willing to try those men and keep them in prison in Turkey. Those people are being used as tools of pressure. IS is a terrorist organization that has carried out attacks in Turkey. Nothing prevents the trial and imprisonment of foreign nationals, but they are unwilling to try them.”

The lawyer claimed that Ankara’s attitude on the issue was similar to its policy of threatening to unleash refugees on Europe. Drawing a comparison to the Syrian Kurdish People’s Protection Units (YPG), he said, “Are YPG members held in deportation centers and then extradited to Syria? Absolutely not. They are all in prison. Why are they not doing the same when it comes to IS?”

According to human rights lawyer Erdal Dogan, crimes against humanity and genocide are codified in the Turkish penal code. Therefore Turkey has to try IS members or hand them over to Syria under the Adana accord. “Turkey cannot make do by holding those people for violating the passport law only," he said. "They must be investigated even if their crimes did not take place on Turkish soil. The same goes for Europe.”

Abdulhalim Yilmaz, a lawyer with experience in deportation cases, drew attention to frivolities in the effort against IS. According to Yilmaz, the authorities often fail to properly investigate individuals who are likely to be IS members, while marking the files of unrelated individuals as “Daesh” — another acronym for IS — to expedite their deportations.

Explaining how the proper process should work, he said, “If information and evidence is available that an individual has joined IS, an investigation must be opened and the appropriate measures taken. In the absence of evidence, the person is handed over to the immigration administration for relevant administrative procedures and placed in a deportation center. If there is no crime of an international nature or if the crime has been committed in a foreign country and the evidence is insufficient, Turkey is not obliged to open an investigation.”

He continued, “Many Daesh suspects are currently in prison, while those for whom evidence does not exist are in deportation centers. If terrorism charges emerge, the case must be sent to the prosecution. Presumably, investigations or trials are not initiated because intelligence or evidence is lacking or because they remain inconclusive even if they are initiated. To get rid of those people, Turkey is trying to deport them.”

On the ground, however, terror-related definitions are misused against foreigners, including children, according to Yilmaz. “I had a client, whose children of primary school age were treated as foreign terrorist fighters. More than 90% of those categorized as foreign terrorists have nothing to do with IS,” he said.

The lawyer spoke of cases involving Tajiks, Uzbeks, Chechens and Uighurs who had nothing to do with IS, but the authorities provided intelligence reports that they had joined IS and gone to Syria. “Those people are treated as Daesh suspects. This is abuse [of power],” Yilmaz said.

He continued, “Things are not handled meticulously. After being detained, searched and questioned on the basis of intelligence, they are handed over to the immigration administration without appearing before a prosecutor. Some are deported before the investigation is concluded. Meanwhile, prosecutors sometimes rule that investigations are needless, especially in the cases of Syrians.”

The lawyer further said, “To facilitate deportation, they jot down ‘Daesh’ next to the names [on the files]. But proper criminal investigations are not being carried out. Then, decisions for administrative detention are made and deportations follow. For those marked as ‘Daesh,’ winning appeals becomes very difficult. I’ve seen that Daesh is used as a pretext for deportation in most of the cases I’ve come across. They are trying to deport those people, to get rid of them as soon as possible.”

Yilmaz continued, “Meanwhile, there are many Daesh suspects in jails, but I’m not sure how seriously those who could be really linked to Daesh are investigated. Regarding crimes not committed in Turkey and in the absence of clarity and solid evidence, the likely attitude might well be ‘Why do I try them and get myself into trouble?’”

In sum, slipshod handling of the cases results in victimizing individuals not related to IS, while letting those with actual links off the hook. The flawed practices on the ground increase the number on paper of those treated as IS members, allowing the government to boast about capturing this or that many terrorists.

In deportations to Syria, Turkey does not deliver the deportees to the Syrian state, but sends them into rebel-held areas via the Cilvegozu border crossing, effectively setting them free.