Turkish forces have captured hundreds of extremists since launching an operation against the Syrian Kurdish militia that fought the Islamic State, and Ankara says a reluctant Europe must take back its citizens. 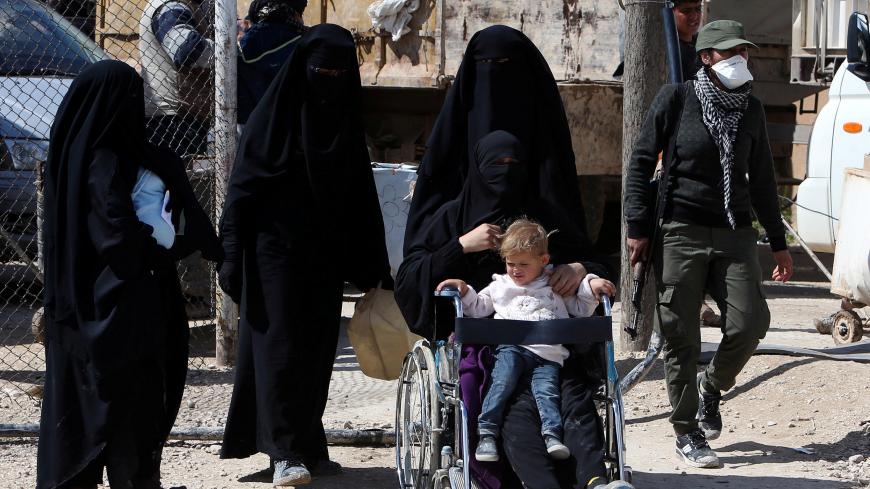 The wife of an Islamic State militant sits in a wheelchair with her son on her lap at al-Hol displacement camp in Hasaka governorate, Syria, April 1, 2019. - REUTERS/Ali Hashisho

ISTANBUL — Turkey wants to send Islamic State fighters and their families back to their countries of origin after capturing parts of northeast Syria from the Kurdish forces who have held the prisoners since toppling the so-called caliphate earlier this year.

Turkey’s cross-border incursion to fight the Kurdish-dominated Syrian Democratic Forces has sparked alarm that a resurgent IS will take advantage of the chaos. Those fears were stoked by a prison breaks and at least one car bombing in the initial days after the offensive began last month.

US commandos killed IS leader Abu Bakr al-Baghdadi on Oct. 26 in a raid on his hideout in Syria’s northwest Idlib province, but the Pentagon has warned that his death does not spell the end of IS, which has since named a new leader and warned it remains “on the doorstep of Europe.”

Turkey says it has captured hundreds of IS militants and their family members since entering Syria on Oct. 9. It has urged Western governments to take responsibility for their citizens who went to Syria and Iraq to wage jihad beginning in 2014. But most European nations do not want the fighters and some have even revoked citizenship for a handful of militants.

Turkish Interior Minister Suleyman Soylu called the citizenship revocation an “unacceptable” attempt to subvert international law. “We’re not a hotel for IS members,” he said over the weekend.

Soylu told reporters on Monday, “We will send IS members we have in custody to their own countries, whether they have been stripped of their citizenship or not.”

His pledge could rattle Europe, which is already fuming about Turkey’s military foray to attack the SDF, which had fought alongside US forces since 2014 and seized the last IS stronghold just seven months ago. Ankara considers the Kurdish fighters terrorists for their links to insurgents active inside Turkey.

US President Donald Trump’s sudden decision last month to abandon the SDF set the stage for the Turkish assault. Turkish President Recep Tayyip Erdogan faced an international backlash, including a partial arms embargo by Europe and a bill last week by the US Congress that will broadly sanction Turkey if it clears Trump’s desk. Erdogan cut deals with the Trump administration and Russian leader Vladimir Putin that give Turkey control of a buffer zone from which the SDF withdrew.

Brussels has warned the incursion could give the extremists a new lease on life, with foreign policy chief Federica Mogherini calling it “a direct security threat to the European Union.”

The EU is loath to take back IS suspects because domestic intelligence agencies are already strained tracking thousands of threats. Insufficient legal safeguards, including a high burden of proof in European courts and relatively lenient sentencing, won’t keep extremists locked up for long, analysts say. Diplomats have told Al-Monitor the fighters should be tried and punished where they committed the crimes.

Some 12,000 IS fighters were in seven prisons in northeast Syria, according to Kurdish authorities. The United States estimated that 2,000 of those detainees are militants from 50 countries.

Some 75 miles (120 kilometers) from the area Turkey now controls is the al-Hawl camp, where nearly 70,000 women and children were being held in “dire conditions,” according to rights groups. Of these, an estimated 11,000 people are foreigners.

Erdogan said last month the facilities were poorly secured, many of them simple open-air detention centers or tent encampments. He accused Kurdish authorities of releasing 750 IS fighters and their relatives in the days after Turkey began the operation.

Erdogan told reporters at an Oct. 18 briefing that Turkish nationals will be brought home for prosecution. “As for the others, we will speak with their countries and undertake the work to send them to their own countries, which will decide” their fate, he said.

Turkish authorities have stepped up raids on IS cells at home and last week arrested 32 foreign IS suspects. About 1,200 foreign militants are currently in Turkish prisons or deportation centers, Soylu said. Since entering Syria, Turkish forces have taken custody of 287 IS members, including women and children, he said.

Soylu singled out the United Kingdom and the Netherlands. This year the UK stripped the citizenship of two people after they were captured by Kurdish forces in Syria. Last week, two Dutch women and their three children escaped al-Hawl and showed up at their embassy in Ankara, requesting repatriation, according to media reports. Turkish police have detained the group.

Turkey wants Germany to take back 20 fighters,  a senior adviser to Erdogan, Fahrettin Altun, told Stuttgarter Nachrichten newspaper on Monday. Four Germans were captured in Syria, while another 16 were in Turkish refoulement centers, he said.

Turkey suffered the brunt of IS violence in 2015 and 2016, when the group staged more than a dozen attacks that killed some 300 people. The Turkish military first entered Syria in 2016 to fight IS and still controls that stretch of territory south of its border.

Erdogan had lobbied Trump for months to step aside in northeast Syria, arguing Turkey would take over the fight against IS from the SDF. The only commitment Trump sought in a call with Erdogan before greenlighting the Turkish operation was a pledge to contain IS, a senior Turkish official said.

Since then, Trump has said Islamic State is now Europe’s problem and that the fighters are likely to make their way north.

“European countries kicked the can down the road and tried to wash their hands of this,” said a conflict mitigation expert who has visited the IS jails on condition of anonymity. “But it’s inevitable that people will escape and find their way to Turkey and from Turkey onward. It was a recipe for disaster to leave thousands of Islamic State prisoners in makeshift camps in the middle of the desert run by a militia.”