President Recep Tayyip Erdogan’s biggest promise was to minimize the role of the military in politics. Did he keep his promise? 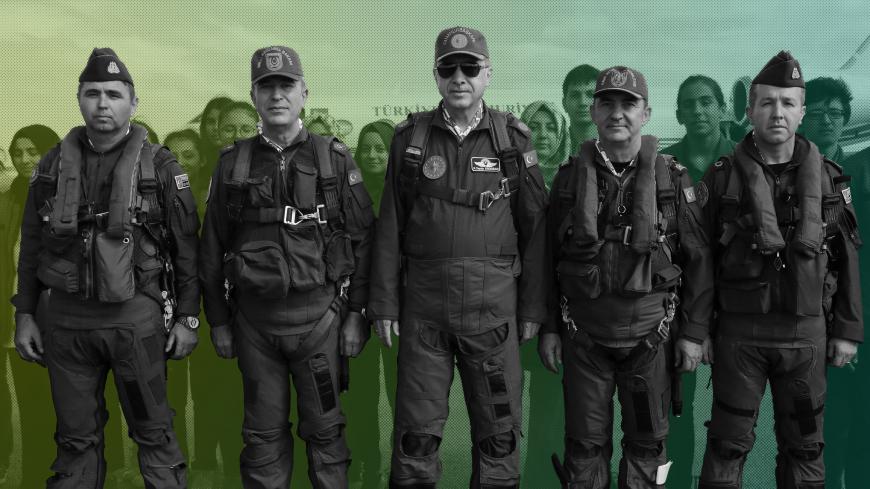 Reading Turkish news is anything but boring. For example, in your morning scan of the Turkish news networks, you may be bombarded with videos depicting a “baby who did a military salute the moment he was born.” The video of the baby — whose umbilical cord was still intact — saluting made the headlines of several pro-government news networks five weeks after the launch of Operation Peace Spring. The report concluded with the oft-repeated dictum: “Another Turk is born a soldier!”

Operation Peace Spring may officially be over, but the militarization of Turkish society is forging ahead at full speed. Since the July 2016 coup attempt, Turks have been bombarded with images of the military. Turkish President Recep Tayyip Erdogan and his ministers periodically pose and salute in military uniforms. Seeing Foreign Minister Mevlut Cavusoglu in military gear, one could not help but remember Iraqi President Saddam Hussein’s foreign minister, Tariq Aziz, in a similar get-up.

It has become the norm for politicians in the lower ranks of the Justice and Development Party (AKP) to give speeches in military uniforms, even though they are civilians. But the militarization trend extends beyond costumes, chants and slogans. Since March 2018, civilians’ annual quota for ammunition has been increased five-fold (from 200 to 1,000 cartridges). Research shows there are more than 25 million guns in Turkey and 85% are not registered. Since 2002, when the AKP came to power, the number of police officers has increased 61.3%, along with their powers and immunities. Interestingly, the number of officers in the armed forces has significantly decreased over the years. The defense minister stated that the armed forces were able to fill 65% of their ranks in 2019. The repeated reorganization of the military has decimated the top ranks in particular.

Erdogan frequently tells the public that Turkey is engaged in a war of survival. For example, at a Republic Day ceremony Oct. 29, Erdogan made live phone calls to military officers stationed inside and outside Turkey. Seasoned journalist Rusen Cakir commented that Erdogan could have also called other individuals whose successes are a source of national pride. Turks are bombarded every day with news broadcasts that blare Ottoman military marching band tunes in the background.

In 2002, Erdogan promised to minimize, if not end, the role of the military in Turkish politics. Turkey has suffered several military coups, so this bold promise garnered support from liberals, Kurds, Islamists and even those who were eager for Turkey to gain full EU membership. Up until the 2010 constitutional referendum, Erdogan garnered the support of a wide swath of the country with his promise to end military tutelage.

Serhat Guvenc, a professor of international relations at Kadir Has University, emphasized how the July 2016 coup attempt was a turning point. “Because this is when the process of glorification of martyrdom and militarization resurfaced," he said. "Today we see an extension of the process that started then. When we look at the forefront we see civilians, but the mindset is more militarized. I was involved in a number of projects aimed at reforming civil-military relations in Turkey as part of its EU bid. Back then, the reform was meant to introduce democratic oversight of the security sector in Turkey.”

When asked how Erdogan’s promise holds up after 17 years, Baskin Oran, professor emeritus of international relations, told Al-Monitor in a humorous manner: “It concluded perfectly! He ended military tutelage only to replace it with his own one-man rule. He first declared himself the prosecutor of Ergenekon [a case where several top-ranking officers were falsely charged and imprisoned]. Then, once he tamed that front, he embarked on a new project coupling Turkism with Islamism. Now he nominated the former chief of staff as minister of defense. This way he acquired not only the support but also the oversight of the armed forces. The most practical evidence of how this is applied can be seen in the invasion of Syria.”

Erdogan is no longer struggling for civilian control of politics. Rather, he is encouraging an expansive role for the military in Turkish politics. But why?

Burak Bilgehan Ozpek, a professor of international relations at the TOBB University of Economics and Technology in Ankara, said: “The civilianization promise brings together certain responsibilities. The AKP’s understanding of civilianization was cleansing the system of the soldiers [demilitarization]. Indeed, the promise of civilianization required acquiring a practical skill to solve social and political problems without resorting to violence and exerting power. And this means you have to expand individual liberties and sustain an open public discussion at all times. As these liberties expand, problems are expected to be resolved with political dialogue, not with security rhetoric. So, we would expect to see a civilianization of culture and regime. Supporting this process would mean the AKP would have shared the political domain with several civil society actors. They would have to convince these actors and make compromises to generate a creative political path.”

Soli Ozel, a professor of international relations at Kadir Has University, summed up how the Turkish Armed Forces (TAF) were restructured: “Once the military lost its central role in the political system and after the devastating blow to its legitimacy because of the coup attempt in July 2016, the AKP felt that the time was ripe to reshape the military according to its own preferences, priorities and ideological inclinations. That process, along with the political exhaustion of the AKP, the intensification of the instrumentalization of foreign policy for domestic political power accumulation, the ever-increasing need of the AKP to rely on the nationalist forces in maintaining political power, brought back securitization. Hence the rising profile of the armed forces as Turkey engages in military operations in both Iraq and Syria.”

Guvenc explained, “Erdogan realized that both in domestic and foreign policy, TAF is functional. Whenever there is a [domestic] political gridlock, military actions outside borders of Turkey proved useful.” It seems each and every military incursion further whetted Erdogan's appetite.

Scholars and military officials Al-Monitor interviewed agreed that Turkey managed to enact demilitarization but not civilianization. Indeed, the visibility of military symbols and images has become lucrative for the government as failed policies accumulate and the Kurdish problem becomes an international matter.

Where will all of this lead Turkey? A two-star retired general who asked to remain anonymous told Al-Monitor: “Erdogan operates under the false assumption that his legitimacy is strengthened with displays of militarism. The palace perceives that the president is accepted by the Turkish people like the ‘sky above their heads,' as Ottoman sultans were once accepted. Yet it is not true. Erdogan cannot see the truth right in front of his face on public opinion polls due to the fog of war his cronies created. He cannot hear the complaints of his constituencies due to the cronies’ cheers for 'commander in chief.'"

However, Ozel has a wise reminder: “[Former President] Ismet Inonu once said that no one could have their own military in Turkey and therefore should not try.”

In the meantime, sales of military uniforms for civilians, particularly kids, have skyrocketed. We do not know if every Turk is born a soldier, but many more today are dressing up in camouflage.