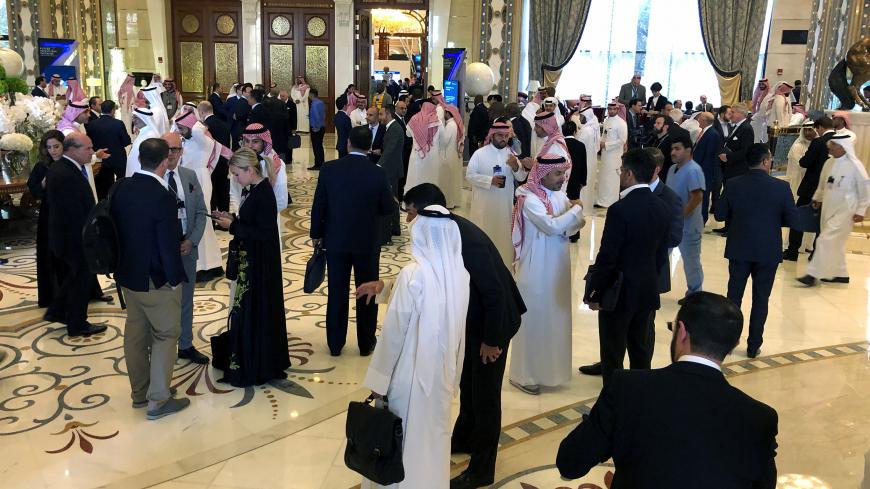 Holding the summit just a year after the murder of journalist Jamal Khashoggi at the Saudi Consulate in Istanbul, Saudi Arabia struggled to attract global executives to its signature investment conference. However, members of India’s business community, including Mukesh Ambani and Anand Mahindra, attended the event, along with some US administration representatives and global banking executives.

Both emphasized the importance of the pact India and Saudi Arabia signed to form the Strategic Partnership Council, chaired by Modi and Saudi Crown Prince Mohammed bin Salman. “This shows the close cooperation in all fields,” Agha said. “Until now, it was a buyer-seller relationship, with India buying Saudi crude [oil]. Now we are moving toward a closer relationship — even moving toward military cooperation. India and Saudi Arabia will have their first-ever joint naval exercise in December. Cooperation in defense production is also in the cards.”

Soubrier shed some light on the nature of defense-production cooperation between India and Saudi Arabia.

Salman "seems eager to use the development of a local defense industry as one of the ways to diversify the kingdom's economy away from oil. The [memorandum of understanding] signed between the Saudi General Authority for Military Industries [GAMI] and the Indian Department of Defense Production to provide a framework for collaboration in military acquisition, industries, research, development and technology constitutes an important step in this direction.”

The other pivot in this relationship is energy ties. Colby Connelly, a research associate at the Arab Gulf States Institute, spoke to Al-Monitor about the memorandum of understanding signed between Saudi Aramco and Indian Strategic Petroleum Reserves Limited (ISPRL).

“Aramco’s agreement to store up to 4.6 million barrels of oil at the ISPRL Padur [strategic oil reserve] facility in Karnataka [state] requires that a portion of the crude be kept at the facility, but also allows Aramco sell to Indian refiners,” Connelly said.

He noted that the Abu Dhabi National Oil Company signed a similar agreement with ISPRL last year to store crude at the same facility.

“Both companies have also expressed their intent to make massive investments in India’s downstream industry,” Connelly said. “This is done partially to secure large customers for crude exports in the form of enormous deals and projects that will take much longer to come to fruition. As a result, the storage deals made with the ISPRL may be a more direct way of trying to achieve this same goal.”

He added, “While India does not consume as much oil per day as China does, its consumption rate grew slightly faster than China’s in 2018 and its domestic oil production doesn’t come anywhere close to satisfying its growing demand. India’s need to import large volumes of crude oil is an advantage for Gulf producers like Saudi Arabia, which will be very happy to help satisfy this demand.”

Agha added, “Both the countries plan to invest in each other. The Saudis plan to invest $100 billion in petrochemical industries, power projects, infrastructure and mining in India. The Saudis want to diversify the economy and see India as a good market for investment.”

The deepening of trade and investment cooperation between the two countries is in accordance with Saudi Arabia’s Vision 2030.

India and Saudi Arabia also discussed security threats and agreed to cooperate to ensure the protection of waterways. This is important in light of the May attack on four oil tankers in the Gulf of Oman. The two sides affirmed "that the menace of extremism and terrorism threatens all nations and societies," the India-Saudi Arabia joint statement read. They further rejected "any attempt to link this universal phenomenon to any particular race, religion or culture." The statement continued: "Both sides expressed their rejection of all terrorist acts and stressed the need to prevent access to weapons including missiles and drones to commit terrorist acts against other countries.”

While the first part of that statement was directed toward Pakistan’s sponsorship of terrorism directed at India, the latter part addressed Saudi concerns. Saudi Arabia claimed that Houthi rebels in Yemen had carried out September attacks and that Iran provided them with the high-tech missiles and drones for it. Iran denies the charge and claims it provides the Houthis only spiritual support and military advisers. Though others, including the United States, UK, France, Germany and the EU, have blamed Iran for the September attacks, India has not.

Though the joint statement addressed Saudi concerns, India deliberately kept it vague, not mentioning Iran or the Houthis. While the omission is due to India’s deep ties with Iran, India might also wish to avoid bad blood with a potential unity government in Yemen, which probably would include the Houthis.

The statement also addressed concerns about the situations in Syria and Palestine.

Hasan Alhasan, an associate fellow on Gulf-South Asia relations at the London-based International Institute for Strategic Studies, said, "Modi has singled out cooperation on counterterrorism and security as an area of progress in Indo-Saudi relations.” Alhasan cautioned, however, that despite Modi’s optimistic tone, the growth of an Indo-Saudi strategic security partnership is likely to be stunted by each side’s relations with the other’s regional rival: The Saudis are close with Pakistan, India’s rival; India is close to Iran, the Saudis’ enemy.

Saudi Arabia may be selling an Indian role in the Gulf to grab American attention. Soubrier said, "We are today at a time when the reliability of the US partner as the main traditional security guarantor of the [Saudi] kingdom and of the entire Gulf region is considered with increasing caution by some countries of the Arabian Peninsula. Against this background, this visit and clear rapprochement with India can be seen as one of many different signals sent to the US that Saudi Arabia is seldom short of other potential strategic partners, particularly the BRICS [the association of emerging national economies comprising Brazil, Russia, India, China and South Africa], which take an active part in the growing multipolarization of the Gulf region.”

Alhasan said that India’s domestic politics might be affected by the increase in India’s annual hajj quota announced in June and the introduction of the RuPay card digital payment system across the Gulf, which stands to make a real difference in the everyday lives of Indian diaspora in Saudi Arabia.