Russia has been fortifying its military presence in Qamishli and appears to be constructing a military base there, its third in Syria. 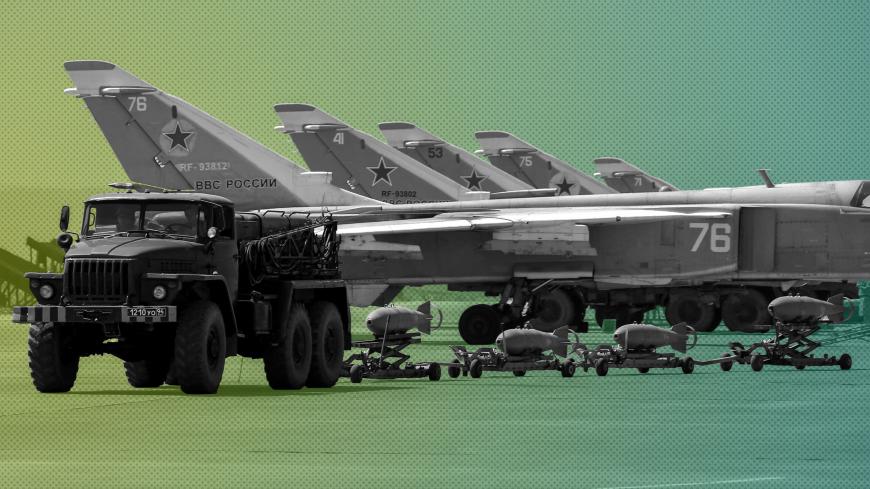 Russian military jets are seen at the Kmeimim air base in Syria, June 18, 2016. - REUTERS/Vadim Savitsky/Russian Defense Ministry via Reuters

MOSCOW — Russia may be eyeing a long-term lease for an airfield in the Syrian city of Qamishli, raising speculation that it's planning a third military base in the country.

First reported by the Syrian Observatory for Human Rights (SOHR), the potential development suggests Russian forces have established a headquarters near the Qamishli airport in northeastern Syria near the Turkish border as part of ongoing efforts to convert it to a permanent air base. Asked to comment on the news, Kremlin spokesman Dmitry Peskov was concise, saying he doesn’t "know who is spreading this [rumor].”

A source in the Russian defense industry told the Russian Nezavisimaya Gazeta, “It is a story concocted by journalists and Western intelligence agencies." Moscow sees the Coventry, England-based, SOHR monitoring group as a disguise for Western spy and propaganda activities.

In Syria, Russia already has the Kmeimim air base and a naval facility in Tartus. Moscow has rented the latter site for 49 years and is now transforming it into a sophisticated naval base.

On Nov. 14, Russia’s Defense Ministry-run TV channel Zvezda reported that Russia had moved a few helicopters from the Kmeimim base to the Qamishli airport.

Timur Khodzhayev, head of the aviation commandant’s office, said one transport Mi-8 helicopter and two Mi-35 multirole gunships have already arrived at the airdrome. Khodzhayev told Zvezda that Russian forces already had 10 vehicles on the ground to "ensure continuous flights, safety of the helicopters and the defense of this territory."

"The main goal is to ensure calm," he said.

What may soon be a third Russian base in Syria is also protected by a Pantsir missile system, while the landing area is guarded by military police.

For a week, Russian helicopters have been carrying out daily patrol missions along designated routes in northeastern Syria. The air patrol is said to be constantly expanding its territory, and now the province of Hasakah, bordering Turkey and Iraq, has come under their control.

Predominantly populated by Kurds, Qamishli is also home to Arabs and multiple ethnic minorities, including Assyrians, Armenians and Jews who fled the Ottoman Empire about a hundred years ago. In early October, before Turkey launched Operation Spring of Peace, a large Russian military contingent was deployed to the area in what now appears to be an early attempt to help the Syrian army and Kurdish militias deter a large-scale Turkish offensive.

Some American troops stationed in the area at the same time were also cooperating with the Kurdish forces before President Donald Trump decided to pull them out. A few days later, when the United States reversed course, the Russians already had some of the facilities under their control.

The memorandum signed in Sochi, Russia, by Turkish President Recep Tayyip Erdogan and Russian President Vladimir Putin left Qamishli out — perhaps not inadvertently — from the list of territories for joint Russian-Turkish patrolling.

Russia decided to double down on the opportunity to ensure control over the strategic territory once it was clear the United States was serious about preserving a grip on some of Syria's oil reserves.

The two options discussed in Moscow for some time were either a possible deal with Americans for control of oil reserves or a military positioning on the ground that could complicate American maneuvers.

“Regardless of the Trump talk on the withdrawal from Syria, we are operating on the assumption that Americans are there to stay and that areas around oil fields would be their prime targets,“ a senior Russian official with knowledge of the situation told Al-Monitor, speaking not for attribution.

“It’s logical — it’s their way to complicate life for us with all the Syria restoration; to lay a burden on Assad, who would thus be unable to extract revenue and would continue to face budget constraints; and to ensure their own relevance and importance in any future say on Syria’s future. So what [the Americans] did wasn’t a surprise. The thing was how to respond to it,” the Russian official explained.

Earlier this month, the US military reportedly met with Kurdish officials outside Qamishli to discuss how to bring US forces back into the area, according to an unidentified Agence France-Presse source.

“[What the Americans are doing] is unacceptable and against international law. Russia is not going to cooperate with the US over the safety of [Syrian] oil,” Russian Deputy Foreign Minister Sergey Vershin told Interfax on Nov. 6.

“East of the Euphrates, the United States is doing everything to create a quasi-state and is asking the Gulf monarchies for large investments [into the structure],” Russian Foreign Minister Sergey Lavrov told RBC news Nov. 12.

Once the idea of cooperation with Americans over oil was denied, it was becoming clear that Russia was up to some movement on the ground. Since a direct attack on American forces was off the table, the only good option left would have to be some kind of “strategic deployment.”

The Qamishli airport — some 500 kilometers (310 miles) northeast of the Russian air base at Kmeimim — has a large dual-use airfield that is of strategic importance in Syria’s northeastern Hasakah province. The city itself remained under the Syrian government’s control even during the roughest years of the war against the Islamic State, and both Russian warplanes and cargo aircraft have already used it on a number of occasions.

A military base in the Qamishli area would help Moscow address at least two immediate challenges: helping the Syrian army regain control of the region and denying both the United States and Turkey access to Qamishli.

As Al-Monitor previously reported, after the Russian-Turkish Sochi deal over northeastern Syria, many in the Russian military raised concerns that the task of patrolling the Turkish-Syrian border was associated with numerous security risks, among which was the long trucking distance for the Russian military police. A base in Qamishli could also solve that problem.

Moreover, a new military base could possibly provide an opportunity for a long-term objective of controlling the skies of Syria, Turkey and Iraq, as well as tracking movements of US and other forces in adjacent territories. Since policymakers in Moscow interpret the latest American actions as “creating new realities on the ground," Russia has moved to create its own. The war in Syria is anything but over, and neither is the geopolitical tug-of-war for regional influence.