Ottoman 'city of princes' ready-made for the Instagram age

Referred to as the "city of princes" for once being a training ground for future sultans, Amasya is attracting tourists with its rich history, museums and natural beauty. 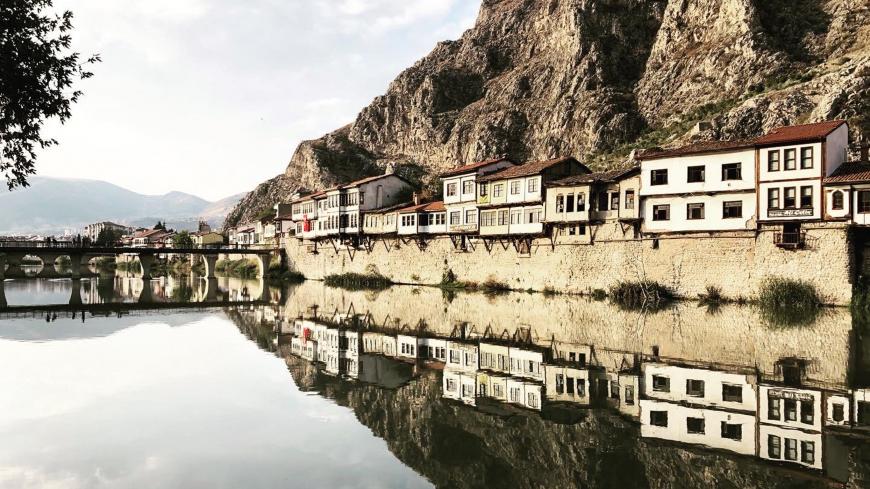 The picturesque Turkish city of Amasya boasts remnants of Greek, Roman and Ottoman history along with a captivating landscape. - Paul Osterlund

The charm of Amasya is immediately evident from photos of riverside Ottoman-era buildings and other historical structures. Even the most seductive of such images, however, cannot prepare visitors for the sheer natural beauty of this Turkish city nestled in the valley of steep, rocky mountains towering above it.

Home to 100,000 people and nearly equidistant from the Black Sea coast and the central Anatolian heartland, Amasya is currently reaping the twin benefits of its beautiful geographic location and wealth of historical sites. In 2018, the number of tourists visiting the city reached 650,000 and by the end of this year is expected to increase to 800,000.

Ismet Abay, who runs the Baslangic Tur tourism agency and owns hotels and restaurants in the city, spoke to Al-Monitor about the city's popularity.

“As a tourist agent who has been providing services in Amasya since 1999, I must emphasize that compared to 20 years, ago, significant innovations have been made in the tourism sector,” Abay remarked. “During this process, the city's important historical architectural structures were restored, and museums were opened that present Amasya's cultural value to visitors in the best way possible.”

Abay further stated, “These developments brought Amasya tour programs to a more fruitful level and succeeded in attracting the interest of tourists in search of quality tours.”

For Amasya's small size, the city has an abundance of museums due to its role as one of the most important cities of the Ottoman Empire. Daniel Steven Fields, a doctoral candidate at Princeton University specializing in the history of the late Ottoman Empire, shared some of the city's history with Al-Monitor.

“Often referred to as the ‘city of princes,’ Amasya punches above its weight in the annals of Ottoman history,” Fields explained. “The town earned its epithet by hosting the sons of sultans during the rigorous training they received as potential rulers of the empire. In dispatching their favorite heirs to govern in Amasya, Ottoman sultans thereby ensured that the princes gained practical experience in statecraft, something that was not available to them in Istanbul.”

Sure enough, in the heart of the city's historic district sits a museum devoted to the “sehzadeler,” the Ottoman princes who centuries ago trained in Amasya. “Amasya was at the height of its power from the middle of the 14th century until the end of the 16th, a period in which a dozen princes would serve as its ‘sancakbeyi,’ or governor,” Fields said.

The city boasts the formidable Amasaya Archaeology Museum, while the Sultan Beyazit II Mosque houses a delightfully detailed model of the city and its surroundings, built over the course of three years and incorporating a planetarium-like feature whereby a time-lapsed night sky evolves into daybreak over the city.

In addition to Amasya's centuries-old Ottoman legacy, Fields noted, it also occupies a crucial position in modern Turkish history. “In the summer of 1919, Mustafa Kemal Ataturk and his entourage arrived in Amasya, where after several days of discussions, the Amasya Circular was issued,” he explained. “This declaration, widely referred to as the ‘birth certificate of the republic,’ criticized the Ottoman government for not defending the independence of the Turkish nation and then laid out a road map of resistance against the Great Powers' attempts to carve up the remains of the empire.”

Fields added, “The Amasya Circular was then distributed across Anatolia, enjoining representatives to travel to congresses in Erzurum and Sivas, where claims of Turkish independence were to be more forcefully articulated.”

Although a generally conservative city, Amasya offers options for those looking for a drink or some lively entertainment. The Ali Kaya Restaurant is a meyhane (tavern) of sorts where diners can sip raki, Turkey's anise-based spirit of choice, as well as enjoy an excellent meze and grilled meat. The restaurant is located high on a peak serenely overlooking the city and its historic buildings and mountainside cave tombs, both of which are made even more breathtaking at night by well-considered illumination. ​

Amid the vast stretch of historical buildings flanking the Yesilirmak River is the Pasha, an ostentatious nightclub where talented and energetic pop singers regale crowds of mostly 20- and 30-something couples with Turkish pop standards. The performers often wander table to table, sipping drinks offered by members of the audience.

While perhaps most famous for its wonderfully crunchy misket apples, Amasya also offers an array of delectable dishes native to the area. Among them are its take on keskek, a wholesome stew made from chickpeas, wheat, lamb (including the tail fat) and spices, and bakla dolmasi, tasty, plump pouches of rolled grape leaves stuffed with meat and fava beans.

The restaurant Anadolu Manti Evi offers several delicious regional varieties of the beloved Turkish dish, manti, small dumplings typically filled with a morsel of meat. Some versions have other fillings, while the Turkmens' version of manti features a fried crispy exterior.

Social media and official promotion of Amasya have played key roles in the increasing number of visitors year after year, according to Abay, many attracted by vestiges of its Greek, Roman and Ottoman heritage.

He asserted, “On social media channels, visitors have shared positive posts regarding the city and unparalleled photographs that encapsulate the traces of three civilizations in a single frame, which has led history lovers to Amasya.”