Journalists and social media activists joined a campaign in support of Palestinian photojournalist Muath Amarneh, who lost his left eye covering confrontations between Palestinians and Israeli forces in the West Bank. 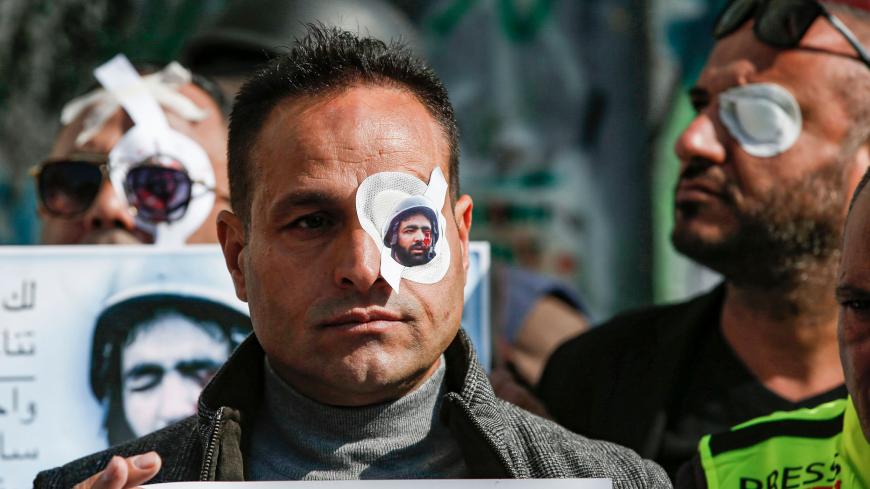 GAZA CITY, Gaza Strip — Palestinian journalists and activists have launched a campaign in solidarity with Palestinian photojournalist Muath Amarneh, who lost his left eye after he was struck Nov. 15 by an Israeli bullet while covering a confrontation between young Palestinians and the Israeli army in Surif, in the West Bank.

The online campaign, which involved activists and journalists who donned eyepatches in solidarity with Amarneh, went viral, and thousands of Twitter users around the world used the hashtag #Ein_Muath (Arabic for the eye of Muath).

One of the captions, appearing in several languages, read, “Muath Amarneh is a Palestinian journalist who documented many incidents with his camera. Yet he could not complete his job as a journalist Nov. 15 because an Israeli bullet hit his left eye.” Other hashtags read, “We are all Muath’s eye,” and "The eye of the truth will not go blind.”

In addition, the Palestinian Journalists Syndicate and media institutions denounced the incident by holding sit-ins in the West Bank and the Gaza Strip.

Mahmoud Hrebat, an anchor for Palestinian Raya FM who is in charge of the campaign, told Al-Monitor it launched just a few hours after Amarneh was injured. Hrebat said the campaign was initially limited to Palestinian journalists but spread quickly and unexpectedly among artists as well as public school and university students around the world.

He said the campaign was based on Palestinian journalists’ conviction that the Israeli army targeted Amarneh on purpose and that many journalists could be targeted in the coming days. This threat is part of what prompted the effort to expose Israel's actions and raise the voices of human rights and press institutions around the world to pressure Israel to halt such practices.

Doctors at Hadassah Medical Center in Ein Kerem, in Jerusalem, removed Amarneh's left eye Nov. 19. Remnants of the bullet shrapnel, however, remain in his eye socket because they are close to his brain and removing them could endanger his health.

Freelance journalist Uceid Amarneh, Muath Amarneh’s cousin, also accused the Israeli army of deliberately wounding the photographer. He told Al-Monitor, “The journalists Muath was with were standing away from the protesters who clashed with the Israeli army. The sniper who shot Muath in the eye did it on purpose, given his ongoing coverage of Israeli violations against Palestinians.”

Uceid Amarneh said his cousin's condition was stable but the remaining bullet fragments could cause complications in the future. He said family members, in cooperation with Palestinian officials and human rights groups, were preparing a legal dossier to submit to international institutions in hopes that Israel could be forced to pay compensation.

A few days before the shooting, on Nov. 11, Muath Amarneh documented how the Israeli army killed 22-year-old Omar al-Badawi in front of the youth's house in al-Arroub refugee camp, north of Hebron. The photojournalist's family believes he was targeted because of his documentation of Badawi's slaying, which drew international condemnation.

Abu Bakr accused the Israeli army of deliberately wounding journalists and said data for 2018-2019 showed a rise in the number of journalists killed and wounded by Israeli bullets. He said Israel seeks to silence the Palestinian voice through such incidents.

He said the syndicate and the Palestinian Bar Association have been preparing a legal file of what happened to Muath Amarneh to submit to the United Nations and the UN Human Rights Council. Abu Bakr said the syndicate has reached out to more than 25 press institutions around the world to brief them on the attack and ask them to condemn Israel's actions. The Independent Commission for Human Rights in the West Bank is also preparing a letter to the UN rights council focusing on the violations Palestinian journalists have been subjected to during the past two years. Aisha Ahmed, a human rights researcher for the commission, said the letter will seek an inquiry into the Amarneh shooting and Israeli army violations against many journalists, and will call for Israel to release the 24 Palestinian journalists it continues to detain.

A report by the syndicate said Nov. 7 that the Israeli army committed 600 violations against Palestinian journalists from early 2019 to early November; these included firing bullets or tear gas, arresting them and preventing them from reporting.

Palestinian journalists, and first and foremost Muath Amarneh, hope the incident and ensuing international solidarity will result in international action that deters Israel and forces it to stop such attacks.