The absence of Israel from the Paris Peace Forum reflects the spirit of its leadership, belittling multinational initiatives and neglecting soft power tools. 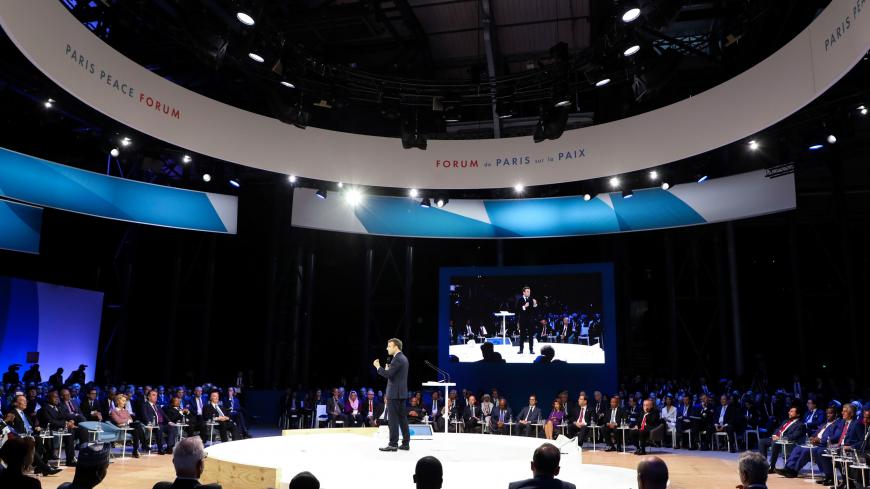 Paris — Thirty heads of state and some 6,000 decision-makers and activists gathered Nov. 12 at Paris La Villette venue for the second edition of the Paris Peace Forum, an assembly designed to promote the spirit of multilateralism. Still, two chairs were left empty at the central agora of the decision-makers: those of the United States and Israel. No Israeli leader bothered to come, not even a junior official or a representative from the embassy in Paris. More so, amid the multitude of stands presenting social development, new technologies, inclusive economy and gender activism projects, no Israeli nongovernmental organization (NGO) attended.

Over the past decade, Israel’s diplomacy, with Prime Minister Benjamin Netanyahu at its helm, has focused much efforts on building ties with African and Arab countries, especially those Israel has no diplomatic relations with or only low-profile ties. A year ago, for instance, on Nov. 25, 2018, Chadian President Idriss Deby visited Israel, resuming official ties that were severed four decades earlier.

But resuming diplomatic ties marks only one facet of advancing Israel’s global influence. The real work behind the scenes is that of "soft power," namely using culture, civil society and the economy as tools for changing and influencing social and public opinion. In Israeli diplomacy terms, this means encouraging global Israeli projects in fields such as smart agriculture, high-tech, informal education, water management and rural development — fields in which Israel excels. Israeli diplomacy has also been endorsing a multilateral approach, where Israeli experts team up with local actors and with third-party funders, so that everyone wins and public/media visibility is high.

In fact, public diplomacy and soft power diplomacy have become the two main axis of action for Israel's Foreign Ministry in recent years. Or more accurately, its only axis of action; Netanyahu and Ambassador Ron Dermer are handling relations with the United States exclusively, and Israeli senior diplomats are regularly excluded from that arena. The same is true for the more discreet ties with Arab countries and with some of the African countries. Netanyahu’s visit to Oman in October 2018 and his meeting in Muscat with Sultan Qaboos bin Said were coordinated by Mossad Chief Yossi Cohen, and not by the Foreign Ministry. On top of that, Netanyahu is systematically emptying the ministry of all its traditional responsibilities, transferring powers and budgets to the Ministry of Strategic Affairs and to other ministries.

Faced with this reality of being sidelined on the "hard diplomacy" front — not to mention being sidelined in anything and everything related to contacts with the Palestinians — the Foreign Ministry had no other choice than to adapt, turning increasingly to cooperation with NGOs and civil society groups. In earlier years, it was the ministry itself, through its cooperation branch Mashav, that initiated most of the cooperation programs with other countries. But in the past 20 years things have changed; civil society groups and NGOs are flourishing in Israel, and many of them reach out abroad, to developing countries. There is also a growing number of Israeli startups that target the African market.

In Cameroon, for instance, the Israeli Embassy supports women empowerment and women's entrepreneurship in the field of smart beekeeping; in Rwanda and Kenya, the Israeli nonprofit organization Save A Child’s Heart is active in the field of pediatric health care; and in South Sudan, IsraAid works on capacity building in vulnerable communities. Another interesting Israeli initiative, which touches Syrian, Afghan, African and even Gazan refugees, is that of the International School Of Peace, which is a low-cost, high-impact school for children in a refugee camp on the Greek Island of Lesbos. This project in particular is a great example of multilateral cooperation between the Israeli kibbutz movement Hashomer Hatzair and other international and local activism groups.

All these initiatives could have perhaps been showcased during the Paris Peace Forum, alongside the Iraqi project on community cohesion or the Niger project of improving preparedness for drought in the Sahel region. Showcased Israeli expertise in agriculture or education could have caught the attention of people that Israel normally has difficulty reaching, such as Prime Minister of Tunisia Youssef Chahed, warmly greeted at the forum by French President Emmanuel Macron. But this was not the case.

One of the workshops conducted at the Paris Peace Forum treated the linkage between climate and security. Each of the panel participants assumed the role of another country, and was requested to come up with ideas of contributing to security in a region of conflict for the year 2030. "Israel could contribute greatly to the development of Sudan in terms of smart water management and innovative agriculture in arid regions," commented the person representing Sudan in this role play.

Israeli diplomats surely would have enjoyed hearing such a proposal, had any of them been present there. Still, under current circumstances, it seems that Israel’s soft power strategy is slipping away. "The Foreign Ministry is currently paralyzed on all levels. Not only do we have zero funding, we are instructed not to initiate anything. There is no money and so people are not working," a senior Foreign Ministry official told Al-Monitor on condition of anonymity.

But the official explained that the problem is in fact much larger than just the financing issue, noting, "In the past we encouraged our people in the embassies to reach out to other Western countries and offer to cooperate in Africa. Some five years ago we started a dialogue with the French Foreign Ministry with the idea of creating joint projects in West Africa, where the French have a firm hold. In the current situation, this is unfeasible. Prime Minister Netanyahu espouses an isolationist approach and this attitude trickles down to all working levels.’’

Much like the approach espoused by US President Donald Trump, Netanyahu has been long rejecting multilateralism, favoring a nationalistic approach, and the idea that the world starts and ends in Washington. To his credit, he has been advancing over the past decade Israel’s ties with Africa. Still, this does not mean that he is willing to be part of an international effort for that continent. Not if Mr. Trump isn’t sitting in the front seat.