Most Israeli Arabs aspire to integrate into the general society, but the country’s political leadership is engaged in a hate campaign against them. 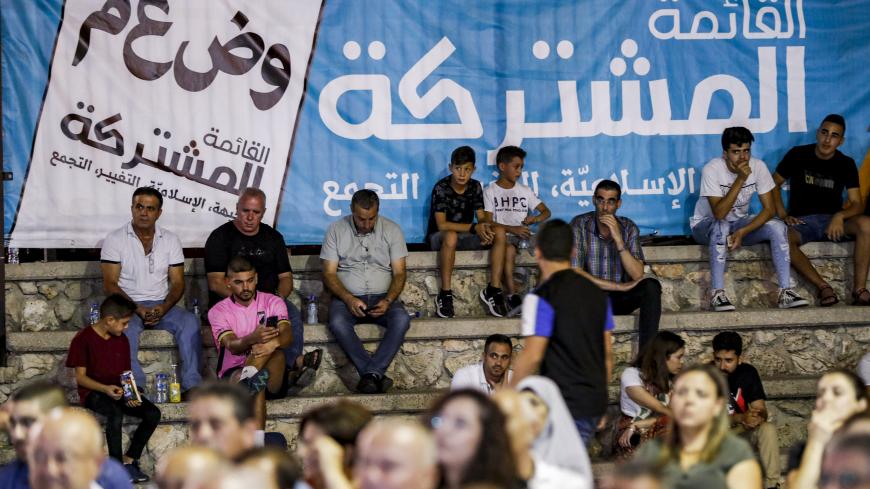 As of this writing (Nov. 19, noon Israel time), there is still a miniscule chance — some would say "threat" — that Blue and White party leader Benny Gantz could decide to form a minority government backed by most Knesset members of the Arab Joint List. However, Gantz is more likely to hand back the mandate he received from President Reuven Rivlin on Oct. 23 to form a government. Assuming that no Knesset member manages to cull 61 Knesset supporters for himself as prime minister within 21 days, Israelis will be dragged to the polls for the third time in less than a year. Prime Minister Benjamin Netanyahu has said that even this bad option was preferable to a government based on Arab Knesset members. Israel’s current kingmaker, Yisrael Beitenu Chair Avigdor Liberman, went as far as to portray the 13 elected Arab Knesset members as a fifth column.

Recent opinion polls do not guarantee that a third round of elections would unravel the political tangle created by the two previous ones (in April and September 2019). On the other hand, a minority government — meaning one that does not enjoy a majority of 61 Knesset votes — with loose external support by some Arab parties could undermine public trust in the democratic system. However, that would pale in comparison with the damage wrought by the unprecedented incitement campaign being waged by the state’s leaders against its Arab minority. The message conveyed by a clear majority of Jewish Israelis to their Arab neighbors — from the far-right Yamina (Rightward) faction to the centrist Blue and White party — is that political chaos is preferable in their view to Jewish-Arab partnership.

Note that the Arab Joint List is not asking for the defense minister’s portfolio in return for its support, or for any other security-related portfolio. In fact, it is totally uninterested in joining any government. On the other hand, when Hezbollah bombarded Israel’s north and Islamic Jihad launched rockets at its south, the country’s Arab citizens sought shelter just like the Jewish ones. Thus, Israeli Arabs are under similar security threats as their Jewish neighbors, yet all they ask for is recognition of them being part of Israel’s society and politics. They do not ask for ministerial portfolios.

Expressions of racism trickle down from the top of the pyramid and dissolve the underpinnings of society. That is reflected in the Racism Index compiled by the Haifa-based 7amleh – Arab Center for Social Media Advancement, according to which Israeli users issued 474,250 racist and/or violent posts against Palestinians, most of them focused on Israel’s 21% Arab minority. The Joint List and its four constituent parties received the highest number of racist mentions. The leader of the Joint List, Knesset member Ayman Odeh, led the targets subjected to violence and racism with 24,000 mentions, followed by Knesset member Ahmad Tibi with over 20,000. The top five included two Israeli Arab women unrelated to politics — television presenter Lucy Aharish and a contestant in the "Big Brother" reality show, Shams Marei Abumuch.

The annual survey of Jewish-Arab relations compiled by Haifa University professor Sammy Smooha should make Jewish politicians think twice about inciting to hatred of Arabs. The percentage of Jews who recognize the Arabs’ right to live in the state as a minority with full civil rights dropped from 79.7% in 2015 to 73.8% in 2017; the rate of those agreeing that the status of Israeli Arabs should be of a minority with full civil rights in a Jewish democratic state declined from 74.9% to 68.1%; and the percentage of Israeli Jews who accept the Arabs as full-fledged members of Israeli society dropped from 69.5% to 61.1%. Other than a small minority affiliated with the political left, most Israeli Jews expressed support for the Nationality Law, which would grant precedence to the Jewish nature of the state over its democratic character.

As expected, mistrust on one side encourages mistrust on the other. The survey reflected a sharp decline in Arab acceptance of the state’s Jewish character: from 60.3% in 2015 to 44.6% in 2017. Smooha attributed the deterioration in the views both of Arabs and Jews first and foremost to the right-wing government’s attempts to limit democracy. Nonetheless, neither side appears interested in escalating the situation to the point of no return.

The Arab minority continues to tie its fate to the State of Israel and to fight for an improvement of its status within the state. Arab citizens do not sever themselves from the Jewish majority. Some 60% (compared with 58.8% in 2015) prefer living in Israel to living in any other country, including a Palestinian state, if and when one is established.

“Coexistence presents challenges that are not easy for either side. It obliges each side to listen to the other, understand its sensitivities and respect its basic rights,” said the official commission of inquiry headed by the late Justice Theodore Or, which investigated the killing of 12 Arab citizens (and one non-Israeli Palestinian) by police in riots that broke out in October 2000. Along with urging the Arab citizens to remember that Israel constitutes the realization of the Jewish people’s yearnings for a state of their own, the Or commission members suggested that the Jewish majority keep in mind that the state is not only Jewish but also democratic, that equality is one of the central pillars of the state’s constitutional structure and that the prohibition of discrimination applies to all its citizens.

“The Jewish majority must respect the identity, the culture and language of the Arab citizens,” the commission wrote. In order to block the deterioration of Jewish-Arab relations, the commission recommended finding ways to boost the Arab citizens’ sense of belonging to the state without undermining their affinity for their culture and community. Not only that, “perhaps it is time to give expression in public life to the common denominator that links the entire population,” the panel members wrote.

A look at the political arena in recent weeks suggests that these important suggestions fell on deaf ears, and not only on those on the right side of the divide. At this critical moment in Israel, when politicians stammer and hesitate over the challenges faced by the country, the mandate to build the society that Israelis wish for should be transferred from the politicians to the civil society. It is the civil society that must now step in and take the lead. Jews and Arabs alike must speak up in one clear voice for advancing the values and the interests that most of them so yearn for.