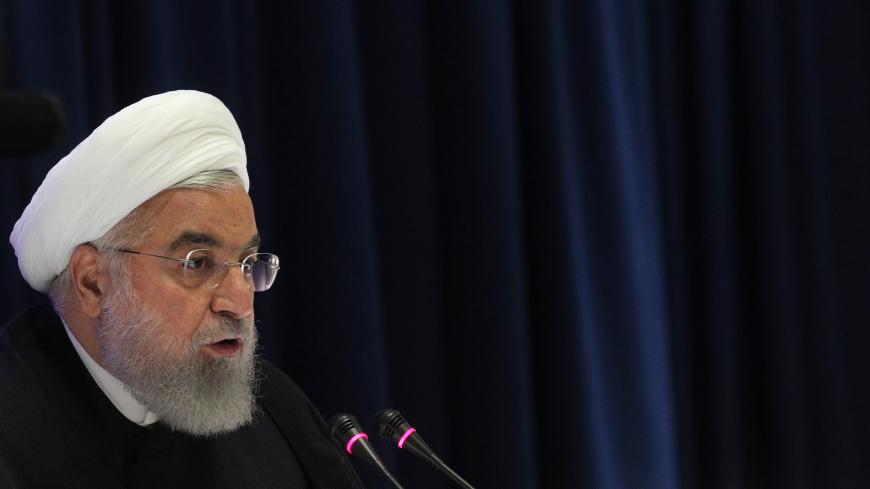 Iranian President Hassan Rouhani speaks at a news conference on the sidelines of the United Nations General Assembly in New York, US, Sept. 26, 2019. - REUTERS/Brendan Mcdermid

When conservative cleric Ebrahim Raisi lost the presidential election to incumbent Hassan Rouhani in 2017, many Iran observers believed he would return to his position as custodian of Iran’s wealthiest charitable institution, the Astan Quds Razavi in eastern Iran, a position he was appointed to by Supreme Leader Ayatollah Ali Khamenei just a year prior to the election. However, it became clear Raisi was not interested in leading a quiet administrative life like the previous custodian. Through his media team — which followed him on his busy schedule to the outskirts of Mashhad and smaller villages to show the work Astan Quds Razavi was performing — it seemed Raisi behaved as if he was still on the campaign trail.

In March 2019, when Khamenei appointed Raisi to be Iran's chief justice, he took office with the clear backing of the ruling establishment to root out corruption — a campaign he zealously embraced as vigorously as the election campaign. Though corruption is a major concern for Iranians and Iranian officials, it was only a matter of time before Raisi’s selective prosecution of corruption would anger other groups and cliques within the Islamic Republic, particularly his former rival in the presidential election.

On Nov. 11, during a public speech in the city of Yazd, Rouhani addressed the judiciary: “Now that you are pursuing cases of corruption involving millions and billions of tomans, also explain to the people the cases of corruption involving billions of dollars.” Referring to the case of Babak Zanjani, who was tasked with selling Iran’s oil while the country was under international sanctions for their nuclear program, Rouhani said, “After a number of years they issued a death sentence for the case of the individual who stole $2.8 billion from the treasury, but it’s not clear where this money went and who else had a role in this case.” Zanjani — a flamboyant billionaire who flaunted his wealth on social media prior to his arrest — has refused to disclose the whereabouts of the money, likely fearing that he will be executed as soon as he does.

Rouhani also divulged some sensitive economic information in his speech, saying that some institutions have acquired $964 million and have no account of it while other institutions are in debt $700 million. He added, “Taking a few people to court over corruption will not fool the people, and they must know about the fate of the large sums of money that have been taken from the treasury.”

In a direct attack on the partisan nature of the judiciary, Rouhani said, “The judges and prosecutors must not be scared and not fear [specific] factions; otherwise, case by case I will announce these amounts [of corruption] from province to province.”

Raisi responded to the accusation by Rouhani the next day, saying, “The judicial organizations are determined to continue this process, and no distractions will entangle us.” He added, “We will also put people in the know.” Raisi also evoked Khamenei, saying the judiciary has his support. “Today, with the blessing of the blood of martyrs and the guidance of the supreme leader, the flag of fighting corruption is raised — and it is a topic that relates to everyone and all factions.”

In October, Rouhani’s brother Hossein Fereydoun turned himself in to Evin prison to serve a five-year prison sentence over a corruption case that began under the previous judiciary chief.