In yet another step away from its nuclear deal commitments, Iran has resumed uranium enrichment at a contentious facility. But the move was too little to appease hard-liners at home. 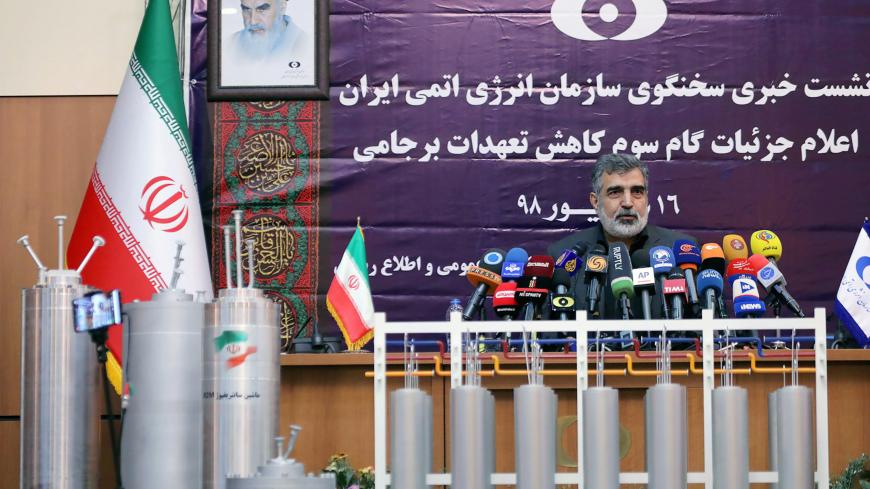 The Atomic Energy Organization of Iran (AEOI) has started work on a fresh phase of scaling back commitments under the 2015 nuclear deal, which had seen Tehran's controversial nuclear program dramatically shrink.

AEOI spokesman Behrouz Kamalvandi said Iranian technicians are set to inject nuclear gas known as UF6 into centrifuges at the Fordow facility, a contentious site located south of the capital city of Tehran. "It is a great development because Fordow was not supposed to be reactivated," Kamalvandi declared.

Under the deal, activity at Fordow had been restricted to research and development with those 1,044 centrifuges spinning empty. The fuel injection — to be conducted before the eyes of the UN nuclear watchdog inspectors — is expected to effectively transform the center back into the active enrichment facility it once used to be.

The new measures will also raise Iran's average daily production of uranium to 6 kilograms, close to the pre-deal capacity. Following the past three phases of commitment reduction, Iran says, its stockpile is now standing at 500 kilograms — well beyond the 300-kilogram cap agreed upon under the nuclear deal.

Resumption of work at Fordow intensifies the potential for enrichment at the 20% level, refueling the very concerns among the major world powers — which pushed them to talks with Iran, culminating in the accord known as the Joint Comprehensive Plan of Action (JCPOA). Yet Iran says it does not feel the urge for now to enrich uranium at that provocative rate.

President Hassan Rouhani officially announced the "fourth step" during a speech in Tehran Nov. 5. It falls within a larger process in which Iran has been dropping one commitment after another since May. Tehran says the phased breaches are meant to have the European signatories honor their commitments regarding the economic relief it expects from the deal, which has been in tatters since the US administration walked away from it in May 2018.

Tehran insists that all those steps are revocable and as soon as concrete, positive measures are taken by the other side, a return to full commitments will be a matter of hours. Foreign Minister Mohammad Javad Zarif, the key architect of the deal on the Iranian side, corroborated this. "Easy solution for E3/EU: Abide by your obligations & we'll reverse course," he tweeted on the eve of the implementation of the new breaches.

The Rouhani government, which has capitalized on the nuclear deal as its biggest foreign policy triumph, says the policy could save the agreement rather than push it to the cliff. "We are determined to salvage the nuclear deal," said Iran's Ambassador to the United Kingdom Hamid Baeidinejad. He, however, warned about the blow a potential collapse of the multilateral pact may deal to global peace.

Hard-liners who advance an anti-West agenda and have been adamantly against the very essence of the accord continue to take aim at the Rouhani government for its refusal to abort hopes on the European sides. To them, an instant withdrawal from the JCPOA is the best response.

"The fourth step will not work to force the Europeans into certain concrete measures to protect Iran's interests in the deal," said Hossein Naghavi Hosseini, the conservative spokesman for the National Security and Foreign Policy Commission of the Iranian parliament. Earlier, the ultraconservative daily Kayhan, known for its bellicose and stinging editorials against Rouhani and Zarif, downplayed the new measures as too small to leave an impact. The earlier three steps, Kayhan wrote, only emboldened "the Europeans, who not only continued to ignore their commitments, but they also took sides with the United States, openly defending their strategic alliance with Washington [against Tehran]."