Iran has announced more progress on its nuclear program beyond what was stipulated in the nuclear deal. 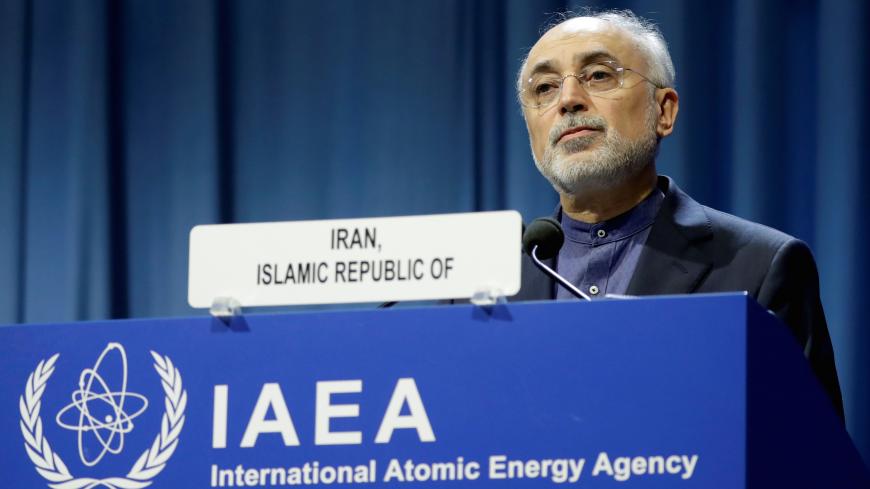 Ali Akbar Salehi, the head of Iran’s Atomic Energy Organization, visited the Natanz nuclear facility in November. There, he spoke to reporters about Iran's progress in reducing its commitments under the 2015 nuclear deal with the five permanent members of the UN Security Council plus Germany.

Salehi said Iran has made operational a chain of 30 IR-6 centrifuges. In the last two months, he said, Iran has connected 15 new centrifuges. Salehi said that in the same time span Iran has added 2,660 SWU (separative work units), reaching a total of 8,660 SWU. Since taking the third step in reducing nuclear commitments in September, uranium production has gone from 450 grams a day to more than 5,000 grams a day.

Under the 2015 Joint Comprehensive Plan of Action, or JCPOA, Iran was permitted to operate 5,000 centrifuges of the first generation IR-1s. With the US exit from the JCPOA in 2018 and the resumption of international sanctions, Iran announced incremental reductions in its commitments to the JCPOA in two-month phases. Officials said they plan to take the fourth step in early November.

Salehi’s visit to Natanz took place on the 40th anniversary of the 1979 US Embassy takeover, which led to a 444-day hostage crisis and the rupture of US-Iran relations. His comments were as much political as they were technical. “It was not planned that we would have a chain of 30 IR-6 machines,” Salehi said, adding, “but we are stuck in a political challenge and the decision of higher officials was that with this challenge to demonstrate the potential power and the will of the Islamic Republic.”

The United States is pursuing a so-called maximum pressure strategy to increase sanctions on Iran and cause instability to force the country to renegotiate the nuclear deal. Officials from the Hassan Rouhani administration said they would only negotiate with the United States if they signed back on to the original 2015 JCPOA.

Iran’s Supreme Leader Ayatollah Ali Khamenei, the final decision-maker in all state matters, ruled out talks with the United States in his latest speech. “Some think that negotiating with America will solve the country’s problems,” Khamenei said Nov. 3. “This is a big mistake, 100% they are wrong.” He continued, “The opposing side views our sitting down at the negotiation table and accepting negotiations as bringing the Islamic Republic to its knees.”

The United States wants “to say that with economic pressure and extreme sanctions we were able to bring Iran to its knees and sit behind the negotiation table," Khamenei said. "They want the world to understand this. They want to show that ‘maximum pressure’ is good policy.”

He continued, “They will not give any concessions. If Iranian officials sit down with the US and negotiate they would get nothing, no sanctions would be reduced.” Rather than alleviating sanctions, Khamenei said that negotiating with the United States would “result in new expectations” against Iran.