President Abdel Fattah al-Sisi has called for listing companies affiliated with Egypt's armed forces on the stock exchange, allowing citizens to buy the shares in an effort to increase transparency. 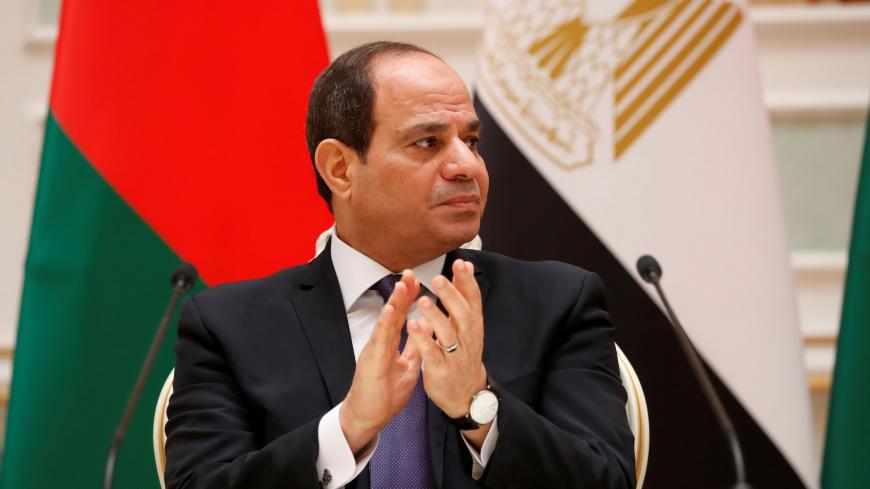 President Abdel Fattah al-Sisi has called for listing some military-owned companies in the Egyptian stock market in an effort to increase transparency and enable Egyptians to buy shares in these firms.

“There must be an opportunity for the armed forces companies to be listed in the Egyptian stock market as part of the initial public offerings made for some government companies,” Sisi said in an Oct. 31 speech broadcast from the opening of a military-owned medical gas plant in Giza governorate.

Since the fall of former President Hosni Mubarak in 2011, a shortage of foreign exchange and the exit of some foreign investors from the country have left Egypt in a severe economic crisis. The weak economic situation has prompted the Egyptian armed forces to get heavily involved in many new projects implemented by the government in such fields as agriculture, industry, infrastructure, roads and construction.

In 2016, Sisi denied that the military had taken control of the local economy through these projects, saying that its participation in the Egyptian economy is limited to 1.5-2%. He reiterated this stance Oct. 31, saying, “When the armed forces play this role, it is not at the expense of the private or civil sector.”

Economists have praised the move as a boost for transparency and management, but say that listing the companies in the stock market will be difficult because their operation differs from other private firms.

“The Egyptian market is complicated because you have the public sector, which has its own rules; the private sector, which is not given much support; and the armed forces companies, which have their own way of doing business,” Basant Fahmi, an economist and member of the parliamentary economic affairs committee, told Al-Monitor.

Fahmi said that in order for these companies to enter the Egyptian stock market they must change their regulations. “For example, according to the military law, if there is a dispute between any military company and another public or private company, a military court would be the authority … and this has to change,” she said.

Fahmi said that the companies would have to change their corporate character to limited liability firms in order to be listed in the stock market.

Ahmed el-Shami, an economics professor at Ain Shams University, said that the move would end the controversy over the operations of the armed forces companies and would increase investor confidence in the Egyptian economy. He said their listing will make these companies' operations transparent to the public.

“The move … is an ideal response to attacks on their role in the economy and ends the ambiguity over their activities,” Shami told Al-Monitor.

Shami added that these companies play a growing economic role by providing millions of Egyptians with products and services at competitive prices in construction as well as cement and industrial chemicals.

“These fields mainly focus on securing and meeting all the needs of the armed forces as well as overflowing products to the local market. Getting listed in the Egyptian stock exchange would raise the market value of these companies and give them a chance to grow financially,” he said.

One of them, El Maadi Company for Engineering Industries, is owned by the Ministry of Military Production. The company is reportedly working on an electricity project worth $28 million. Another company, 51% of which the Egyptian military owns, is managing the development of the new administrative capital, into which $45 billion has been invested. A third is establishing the largest cement factory in Egypt.

Prime Minister Moustafa Madbouli said in September that Egypt would offer government-owned stakes in five or six large companies on the stock exchange during the current fiscal year ending June 30, 2020. In March, the government launched the first phase of the public offering program by offering an additional 4.5% stake in Eastern Tobacco, an Egyptian company that manufactures tobacco products.

Initially, the program involved 23 companies, including new companies and increased stakes in already listed companies. The government decided last year to postpone the first phase of the program due to the repercussions of the sell-off wave that hit the emerging markets on the Egyptian Stock Exchange. Shami said that the president’s call to list the military companies will restore investor confidence in the IPO program.

He added that the stock market lacks valuable commodities, especially after the exit of big companies. For example, Global Telecom was delisted because its majority shareholder Veon acquired 42.3% of the company.

The entry of the military companies marks “a major turnaround in the political leadership’s approach and will definitely have positive repercussions for the Egyptian economy and foreign direct investments,” said Shami.