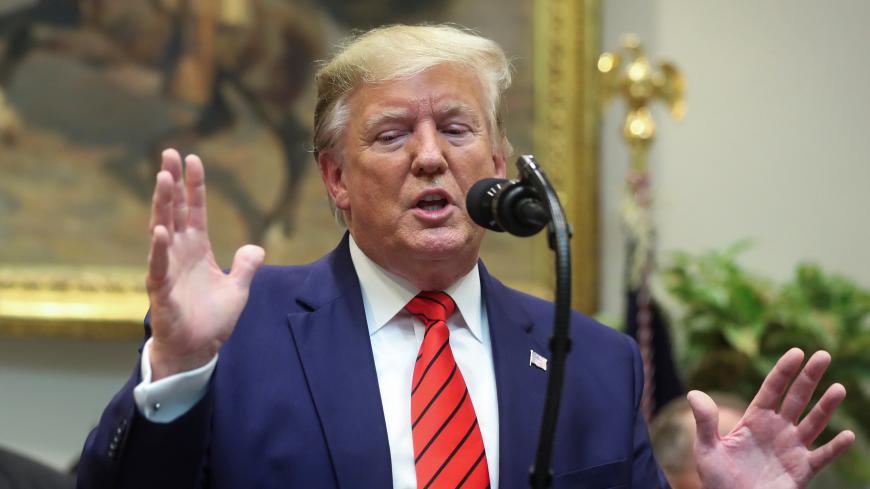 US President Donald Trump answers questions from reporters during an event to sign executive orders on "transparency in federal guidance and enforcement" in the Roosevelt Room of the White House, Washington, US, Oct. 9, 2019. - REUTERS/Jonathan Ernst

The US administration is expected to announce an unspecified package of sanctions against Turkey today, Bloomberg has reported. The news came after Al-Monitor reported that Turkish President Recep Tayyip Erdogan was among a list of officials and entities under consideration for sanctions.

The administration has been weighing whether to add Erdogan to a proposed list of Turkish officials and entities to be sanctioned over NATO ally Turkey’s military incursion into northern Syria, an administration official and a source with close knowledge of the administration’s policy-making told Al-Monitor. The administration sanctioning the Turkish president would deliver a huge, and potentially irreversible blow to over half a century of strategic partnership between the two countries and place Erdogan and his government in the same basket as Iran and Venezuela, the source who is privy to the administration’s deliberations told Al-Monitor. The Bloomberg report did not mention the president nor did it specify who or what entities if any were designated but said the sanctions were awaiting President Donald Trump's approval.

The official, who asked not to be identified to speak freely, confirmed that Erdogan’s name had come up in discussions on whether to impose sanctions on Turkey for its actions in northern Syria. “I heard Erdogan’s name being discussed,” the US official said. “I have not heard other names,” the official said when pressed for other Turkish officials under consideration for sanctions.

The sanctions could come as early as Tuesday if the administration decides to push the button. If it does, it will raise the question of whether Erdogan will travel to Washington to meet with Trump on Nov. 13 — Trump announced the invitation via Twitter — and whether the invitation would be withdrawn.

Trump has been threatening “important” sanctions against Turkey ever since his Oct. 6 phone call with Erdogan, followed by the White House’s shocking announcement that it would withdraw troops from the Turkish border to allow Turkish forces to move into northern Syria. He renewed the threat today, tweeting, "Big sanctions on Turkey coming! Do people really think we should go to war with NATO member Turkey? Never ending wars will end!"

The United States has said it would only respond to Turkish troops if fired upon.

On Sunday the administration announced that around 1,000 US forces would withdraw from northern Syria with only a small contingent remaining in Al-Tanf near the Jordanian border after saying it would never abandon its Syrian Kurdish partners.

As news of the proposed sanctions spread, many are asking why Trump would punish Turkey for launching the operation against the Syrian Democratic Forces (SDF), which it's long threatened to do, having given Erdogan the green light to do so.

The administration official offered a possible explanation, telling Al-Monitor that Washington had offered to mediate between SDF commander Mazlum Kobane and Turkey after the White House released the statement and that Erdogan “did not shut the door” but then went ahead and authorized the incursion anyway, giving US Ambassador to Ankara David Satterfield 24 hours' notice in a letter.

None of this is likely to cut any ice with Erdogan, who has a successful track record of facing down Washington's threats, most recently purchasing Russian-made S-400 missiles. Trump has yet to act on a slew of congressional bills to sanction Turkey over the deal and it remains to be seen whether Washington will have the stomach to act against one of its most important if increasingly erratic allies in the Middle East.

Turkish troops waded into northern Syria on Oct. 9 with their Syrian National Army allies and seized the the strategic border crossing of Tell Abyad from the US-backed Kurdish-led SDF on Sunday amid reports of chilling rights abuses and prison breakouts by Islamic State captives and their family members in different parts of the Kurdish-run region.

The Turkish incursion provoked uproar and confusion, with Trump’s Republican allies leading the chorus of protest and scrambling to assemble fresh legislation to sanction Turkey. On Sunday Trump said he was conferring with Republican Senator Lindsey Graham of South Carolina, who has been championing calls to punish Turkey. “The Treasury is ready to go, additional legislation may be sought. There is great consensus on this. Turkey has asked that it not be done. Stay tuned!,” he tweeted.

Trump’s words suggest that Turkey is aware of the planned sanctions, though it remains unclear what the vehicle and precise justification for them would be, though human rights abuses may serve as an increasingly likely basis, the source said.

Senior administration officials have aired horror at extrajudicial killings of SDF captives by Arab forces allied with Turkey and the gunning down of female politician Hevrin Khalif after her car was ambushed by them on Saturday. Some SNA factions have been involved in a catalogue of abuses including in Afrin, the Kurdish-majority enclave Turkey invaded in Jan. 2018. They also have a record of shooting at US forces across deconfliction lines in Manbij.

The other big worry, especially among European governments, are the reports of IS operatives taking advantage of the situation to break free. US officials quoted by the Washington Post said multiple Kurdish-run detention facilities were now unguarded and that the Pentagon reckoned hundreds of detainees had escaped.

Turkey insists it will press on with the operation as the SDF announced a deal for Russian and Syrian regime forces to move into the towns of Kobani and Manbij. Presidential spokesman Ibrahim Kalin tweeted, “Turkey fights PKK and IS terrorists, not Kurds. The goal is to clear our border and allow refugees to return to their homes safely. The world should support Turkey rather than buy into PKK/YPG propaganda.” PKK is short for the Kurdistan Workers Party, the Kurdish militant group that has been waging a bloody 35-year insurgency inside Turkey. YPG is the acronym for the People’s Protection Units, the PKK’s Syrian Kurdish sister organization that forms the backbone of the SDF. The Pentagon’s now collapsed partnership with the YPG, which it pursued even after IS’ defeat in March, has infuriated Turkey and is cited by Turkish officials as the root cause of the incursion.

Paradoxically, the United States has long aided Turkey in its war against the PKK, which is on the State Department's list of terrorist organizations, providing it with real time intelligence against the militants in their mountain hideouts in Iraqi Kurdistan. The YPG fell between the cracks when it was established in 2004, a loophole that allowed the Pentagon to arm and train the group in the fight against IS.

Nicholas Danforth, a senior visiting fellow at the German Marshall Fund of the United States, recalled that throughout the 1990s, at the height of the Turkish army's scorched-earth campaign against the PKK, "Washington was willing to provide diplomatic and military support to Turkey while it was committing war crimes against Kurds," Danforth told Al-Monitor. "Now it has channeled its self-righteousness toward their cause. I almost feel sorry for Erdogan for having to make sense of Washington's incoherent policy at this point."

The source who discussed the details with Al-Monitor said the growing consensus was to not wait for Congress and to hit Turkey as early as Tuesday likely with the planned executive order announced by Treasury Secretary Steve Mnuchin on Friday. “They could blast out Tuesday and not wait for Congress,” the well informed source said. Mnuchin signaled the same, telling ABC’s “This Week on Sunday,” “We are ready to go at a moment’s notice” and that the impending executive order would among other things “designate individuals and entities of the government of Turkey involved in human rights abuses or actions leading to the further deterioration of peace, security and stability in northeastern Syria.”

The United States has already used authorities building on the Treasury’s Global Magnitsky Act to freeze assets of Turkish Justice Minister Abdulhamit Gul and Interior Minister Suleyman Soylu over their involvement in the detention of North Carolina pastor Andrew Brunson in August 2016. The move sent the Turkish lira into a tailspin and Brunson was freed shortly after. The sanctions on the Turkish officials were lifted.

It remains unclear, though, with US forces gone, how any sanctions would curb Turkish actions on the ground in northern Syria. It is now Russia, which has bases and ground troops in Syria, that will call the shots. The immediate effect of the sanctions will not be of any help to the Kurds but will shatter whatever is left of Turkey’s crumbling relationship with the United States.

Aaron Stein is the director of the Philadelphia-based Foreign Policy Research Institute and closely monitors the Syrian conflict. He told Al-Monitor, “The US response to Turkey was always going to be harsh but was going to imposed in a coherent way. What makes it incoherent is that Trump has a bureaucracy of his own making that has tried to bind the president into making policy he was opposed to,” such as retaining US troops in Syria. Stein continued, “Now that it's collapsing Trump is reacting to his own base rather than the policy being tethered to Erdogan, as far as we know. But Erdogan is very paranoid and he is going to add this to a list of where people are trying to topple him.”

Stein concluded, “We really have to start thinking of a full rupture with Turkey, including laying NATO on the table, with all the repercussions.”

Defense Secretary Mark T. Esper told “Fox News Sunday,” "I think Turkey, the arc of their behavior over the past several years, has been terrible. They are spinning out of the Western orbit, if you will.” Sanctions will sharply accelerate the process, pushing Turkey closer into the arms of Russia, China and Iran.

Editors' note: This article has been updated since initial publication.