Despite its political and military significance, US President Donald Trump’s green light for Ankara does not make Turkey’s task east of the Euphrates River any easier. 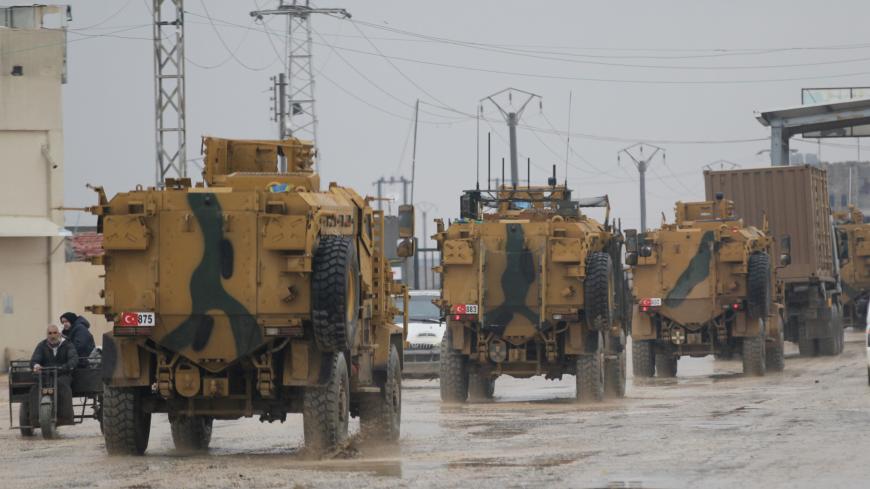 Turkish military vehicles ride at the Bab al-Salam border crossing between the Syrian town of Azaz and the Turkish town of Kilis, in Syria, Jan. 1, 2019. - REUTERS/Khalil Ashawi

President Recep Tayyip Erdogan has been vindicated in his reliance on President Donald Trump. The US leader has given him the green light for a Turkish incursion into northeastern Syria to carve out the “safe zone” Ankara has been pushing for some time.

Ankara wants exclusive military control over an area 480 kilometers (300 miles) long and at least 30 kilometers (18 miles) deep in Syrian territory east of the Euphrates River. It aims to root out the People's Protection Units (YPG) — the US-supported Kurdish group it considers a terrorist organization and a security threat — from the region. Ankara also wants to settle the bulk of the estimated 3.6 million refugees Turkey has been hosting at great cost in the area.

Not surprisingly, Erdogan’s supporters are lavishing him with praise over his “remarkable diplomatic success” with Trump. According to Mehmet Barlas, the lead editorialist for the pro-government daily Sabah and a staunch Erdogan supporter, “President Erdogan displayed exemplary conduct in this crisis and secured a superb achievement.”

These quarters also delighted over the Newsweek report that quoted a National Security Council source in Washington who said Trump had been “out-negotiated” and “rolled over” by Erdogan.

Trump’s green light comes with caveats, though. To start with, he warned Erdogan that Turkey will be accountable for any resurgence by the Islamic State (IS) in the region. Many Turkish analysts believe this will leave Turkish forces in Syria facing a threat from IS in addition to that from the YPG.

Ankara is also bracing itself for the anti-Turkish campaign its operation will encounter internationally. Some Western commentators are already speculating about war crimes Turkey will commit against the Kurds. Such articles are expected to increase if the Turkish operation displaces local Kurds and members of Christian minorities.

Akdogan Ozkan, a columnist for the independent T24 news portal, also referred to this point. “If Ankara doesn’t protect the interests of the Kurds in the safe zone it proposes to set up as much as it does the interests of the Sunni Arabs and Turkmens, then … we will never attain lasting peace in Syria,” Ozkan wrote.

The general belief is that Ankara will tread cautiously and move slowly until some of the crucial outstanding questions are cleared. This is also a task that it will have to carry out on its own without any international support, and possibly with obstructions from other stakeholders in Syria.

Neither is it clear if Trump can ultimately be relied upon. Many analysts recall that his equally unexpected decision last December to pull US troops out of Syria had also come after a conversation with Erdogan following Turkish threats to send the army to northeastern Syria.

Turkey hoped at the time for an orderly withdrawal by US forces from lands east of the Euphrates River and for the Turkish military to replace them — again in an orderly fashion.

That, however, never happened because of the opposition in Washington to Trump’s decision to pull out from Syria.

“Trump knows he is acting against the wishes of the political elite in Washington again,” a Western diplomat told Al-Monitor on condition of anonymity. “Being fickle, he could dash Erdogan’s hopes as easily as he raised them,” he added.

Turkish analysts note that strong opposition in Washington to his latest decision not to support the YPG against Turkey has already forced Trump to change his tune.

“As I have stated strongly before, and just to reiterate, if Turkey does anything that I, in my great and unmatched wisdom, consider to be off limits, I will totally destroy and obliterate the Economy of Turkey (I’ve done before!),” Trump tweeted Oct. 7.

He was harking back to his remark in January, shortly after his decision to pull out of Syria, in which he threatened to “devastate Turkey economically” if it attacked the YPG after the planned US pullout.

Trump was also recalling that US sanctions slapped on Turkey over its incarceration of the American pastor Andrew Brunson had resulted in serious consequences for the Turkish economy in 2018.

For now, though, Trump has cleared up doubts as to whether Washington will actively protect the YPG against the Turkish army. Erdogan feels more empowered, seeing that there is no outside force that will try to prevent his incursion into Syria.

The White House statement on the Erdogan-Trump phone conversation on Oct. 6 indicates that the United States will not be involved in this operation in any way. Nevertheless, the possibility that Trump may change his mind is prompting pro-government commentators to call on Erdogan to act quickly.

Omer Ozkizilcik from the government-funded SETA think tank in Ankara believes that “Turkey needs to work fast to prevent a repeat of Trump’s 'withdrawal' from Syria in December last year.” Ozkizilcik argued in an opinion piece for the official TRT World channel, “Any delay in launching the operation may result in nothing happening.”

There are already signs that not everything will go smoothly for Turkey. Pentagon spokeswoman Carla Gleason told the Anadolu Agency Oct. 7 that Turkey had been removed from the air tasking order of the Combined Air Operations Center set up to counter IS.

“The US military has effectively shut Turkey off Monday from the air space in northeastern Syria, taking a series of actions that reduce the possibility that Turkish jets could support a planned military operation there,” the agency reported.

Political commentator Taha Akyol pointed out that the safe zone Ankara wants will require Turkey to control an area that is some 15,000 square kilometers (9,320 miles) in size. “Experts argue that Turkey can control [the safe zone] without entering Syrian airspace. But the US attitude is not a positive sign for the future,” Akyol wrote in Karar, underlining that Trump’s current position does not mean the United States is withdrawing from Syria. “It is only pulling out of a 30 kilometer-deep strip,” he stressed.

As matters stand, there is no guarantee that US forces outside Turkey’s safe zone will be withdrawn. This means that the US-YPG alliance in Syria could continue and may even be consolidated after Turkey sets up the zone. Put another way, the possibility that the Kurds will gain a degree of autonomy in northern Syria, a possibility that Turkey fears, will not have been done away with by Turkey’s incursion.

Mehmet Tezkan, from the independent news portal T24, argued that it will be almost impossible to realize Erdogan’s plan to settle millions of refugees in the safe zone. “This will require 24 billion euros [$26 billion]. Who is going to give this money?” Tezkan wrote.

Turkey is banking on European support to build 140 new villages in northern Syria with populations of 5,000 each, and to settle a million Syrians in 50 districts with a population of 30,000 each.

Erdogan has been playing on European fears of more refugees from Syria by using a mixture of threats and enticements to get this money from Europe. European countries have nevertheless remained deaf so far and are unlikely to assist in what they see as anti-Kurdish attempts at demographic engineering by Turkey in northern Syria.

Wolfango Piccoli, the co-president of the Teneo international advisory firm that closely follows developments in Turkey, argued that the Turkish operation is more likely to take place now, although its timing and scope remain unclear due to outstanding concerns. Piccoli also maintained that Ankara will struggle to seize and hold such a large swath of northern Syria. “Initially any Turkish incursion is likely to take place in a rural area and be relatively limited in scope,” Piccoli said.

Russia’s position regarding the Turkish operation is also unclear. Moscow says lands captured by Turkey in Syria should be handed to Damascus.

Analysts believe Russia will initially keep a low profile on the Turkish operation because it has the potential to force Trump to withdraw US forces from the region. Nevertheless, it is not giving Ankara a blank check.

Kremlin spokesman Dmitry Peskov told reporters in Moscow Oct. 7 that Moscow was aware that Turkey shared Russia’s position on Syria’s territorial integrity. “We hope that our Turkish colleagues would stick to this position in all situations,” Peskov said.

Using pointed remarks that were no doubt noted in Ankara, he also repeated Moscow’s position that all foreign forces "with illegal presence" should leave Syria.