The Turkish government has kicked off a campaign to demonize Syrian Democratic Forces commander Mazlum Kobane after the latter's recent conversations with the US president and top Russian officials. 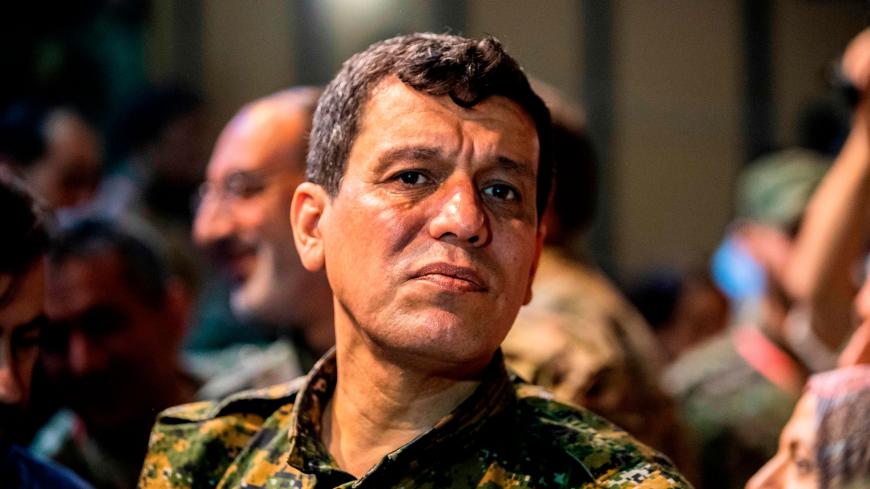 Mazlum Kobane, commander of the Syrian Democratic Forces, attends a meeting with other commanders and representatives of the US-led coalition fighting the Islamic State, Hasakah, Syria, Aug. 24, 2019. - DELIL SOULEIMAN/AFP via Getty Images

When Turkey launched Operation Peace Spring against the Syrian Kurdish People’s Protection Units (YPG) on Oct. 9, Ankara’s main concern was about branding the operation a “war on terror.” The YPG is an offshoot of the outlawed Kurdistan Workers' Party (PKK) which is considered a terrorist organization by Turkey and the United States, along with many Western powers. Turkey said that these terror organizations should be “cleansed” from the Turkish border and that the operation wasn’t targeting the Kurdish people. The other oft-repeated goal was to send some 2 million Syrian refugees to the proposed safe zone.

However, two weeks later, following two separate deals Turkey reached with the United States and Russia most of the public focus had shifted from those two goals to another one: extraditing Syrian Defense Forces (SDF) commander Mazlum Kobane to Turkey. How did the commander end up in the center of this row?

Kobane's SDF helped the United States battle the Islamic State (IS) in Syria, and he has been praised by the US and Russia. However, Turkey considers Kobane a terrorist as he once served with the PKK in 1990s.

Ankara even finds his name offensive. “General” Mazlum, as the US president has called him, is known by the suits in Ankara as Sahin Cilo, his code name during his days with the PKK. He is also known as “Mazlum Abdi” and “Ferhat Abdi Sahin." Ankara is disturbed by the use of the revered title of general, and has two other issues with regard to his name. One is the alarming fact that a person Ankara views as a terrorist is now easing into the global political scene, publicly communicating with top American and Russian officials.

Second, the word Mazlum means “downtrodden victim” in Arabic and is used frequently in the Quran — making it all the more difficult to portray him as a terrorist. Ankara has been worried about that name since the Pentagon used the “Gen. Mazlum” reference for the first time in 2017.

On Oct. 14, I received a few calls from Ankara bureaucrats who all emphasized how disappointed and worried they were to hear US Vice President Mike Pence — who at the time was on his way to Ankara — announce that President Donald Trump had spoken by phone with “Gen. Mazlum.” The brash letter Trump had sent to Turkish President Recep Tayyip Erdogan ("Don't be a fool!") with the commander’s note enclosed was not yet public. Each time a US official speaks of “Gen. Mazlum,” it touches a nerve among Ankara’s senior bureaucrats in diplomatic, military and intelligence agencies. None of the other issues, such as the sanctions imposed through Trump’s executive order or the new lawsuit about Turkey’s state lender Halkbank rings alarm bells in Ankara as loudly as Kobane’s name.

That is precisely why, when a group of US senators asked for an expedited visa for the commander, Ankara’s ire snowballed. On Oct. 24, Erdogan appeared in an interview on Turkey’s state-owned television, TRT, where he announced that the government would officially demand Kobane's extradition from the United States.

“This is a terrorist sought with a red bulletin [issued by Interpol],” Erdogan reiterated, saying that based on the international agreements the United States and Turkey are party to, extradition of criminals is a requirement. This was a reaction to Trump’s Twitter timeline as well.

Trump retweeted posts by SDF spokesman Mustafa Bali summarizing Kobane’s appreciation for the truce. Trump then replied in kind and stated that he was “looking forward to seeing” the commander soon. Erdogan’s television interview confirmed the Turkish president will be traveling to the United States as scheduled Nov. 13, and made this matter the center of the upcoming trip. TRT posted the interview on YouTube with the headline “We will demand extradition of terrorist Mazlum from the US.”

This is not an ephemeral concern for Ankara. And Ankara’s worries are not limited to Washington, either. On Oct. 23, a day after Erdogan met with Russian President Vladimir Putin in Sochi, Russian media published images of a video conference between top Russian military officers and Kobane.

For example, in an Oct. 24 tweet, Daily Sabah columnist Hakki Ocal wrote that the Turkish National Intelligence Organization, MIT, "and its partners in the field must neutralize this man called Sahin Cilo in 48 hours.”

He added, “Sahin Cilo must be eliminated one way or another. It would classier if this happened while he is under US protection."

His first tweet was liked by almost 2,000 users and retweeted 600 times. Concerned observers raised a red flag over his tweets, stating that he is openly asking for the assassination of Kobane. Others have even compared Kobane to the late al-Qaeda leader Osama bin Laden.

All pro-government social media accounts, television channels and newspapers shared photos of Kobane with Abdullah Ocalan, the PKK's imprisoned leader in Turkey. They explained how he was reportedly involved in several terror attacks against Turkey's people.

Why did Kobane become the focus of the military operation? Al-Monitor spoke with several senior bureaucrats and military officials, as well as diplomats in Ankara, to answer this question. All government employees asked for anonymity.

An active duty colonel said, “Operation Peace Spring is not a success. So they need to redirect public resentment somewhere else. What has been achieved is the internationalization of the Kurdish issue. It was an unnecessary war, whether we are allowed to call it a war or not. Indeed, the armed forces fear we will see unintended consequences of this operation at home, such as escaped IS [Islamic State] detainees as well as their families, and increased recruitment into the ranks of Kurdish terror organizations — whatever name they may have — both in Syria and Turkey. And we don't know how these so-called Syrian National Army [SNA] forces will be rehabilitated and utilized as the operation comes to an end.” (The SNA is a coalition of armed, Turkish-backed rebels, including the Free Syrian Army, who oppose the Syrian regime.)

A senior bureaucrat provided a different perspective. He agreed that the two stated missions — clearing out the PKK and relocating Syrian refugees — were far from being realized. However, he argued that those were never the ultimate goal, which was preventing Kurds from forming their own quasi-state.

“In the last couple of years, we observed the establishment and strengthening of institutions for an independent Kurdish state on our border. This we could not allow. The operation sets back the foundation of their agencies at least five years. It's not a permanent solution, but we would much rather make peace with a weaker opponent than a stronger one. On that goal, the mission is a success,” he said.

Other officials expressed similar opinions. They concurred that making Kobane the center of anger helps distract from the operation's obscure ending. Redirecting resentment and discontent toward one person is easier than explaining the operation's different aspects to a success-deprived nation.

Yet Ankara is also genuinely concerned to see a person it considers a terrorist being praised and recognized by Trump and Putin, the very figures Erdogan routinely refers to as “friends.” This might be the biggest loss suffered from Operation Peace Spring, along with the lives lost in combat and legitimization of Kurdish demands for self-determination on the world stage.