Has Erdogan given up rapprochement with Arabs?

For many years, President Recep Tayyip Erdogan worked toward rapprochement with the Arab world, but the Arab League’s condemnation of Turkey’s Syria operation has marked a turning point. 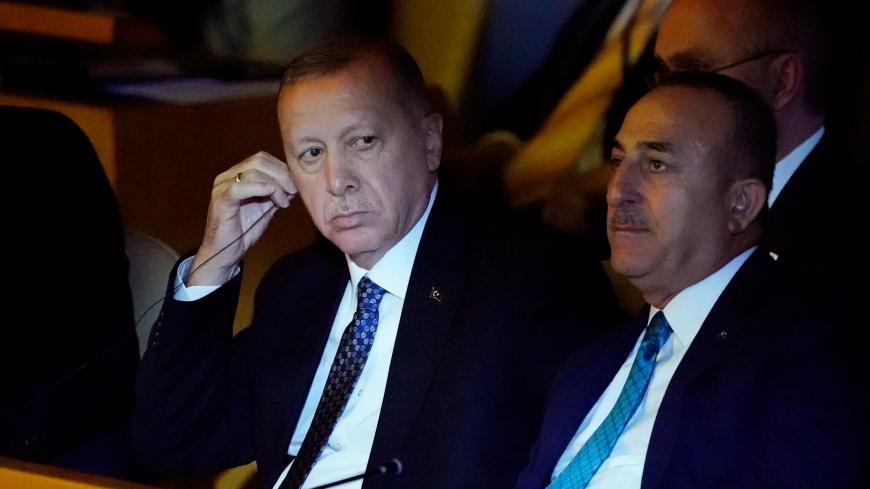 Recep Tayyip Erdogan, Turkey's president and the chairman of the ruling Justice and Development Party (AKP), made tremendous efforts during the party's 17 years rule to improve the negative perception of Arabs in Turkey.

In a 2010 statement, he said, “It is very wrong to judge with prejudice the relations Turkey developed with Arab nations. It is a gross fallacy to say ‘Arabs betrayed us.’ Unfortunately, we still have a mentality that even calls Arabs dogs."

In another statement that year, he said, "Turks and Arabs had turned their backs on each for a century because of misguided policies. Remember our famous poet Mehmet Akif Ersoy, who said, 'Turks can’t live without Arabs. Whoever says they can is crazy. The Arab is the right eye and right hand of the Turk.'"

In a 2011 speech he said, “Arabs are our brothers. We are their brothers. No matter who says what, we will continue to develop our friendship, brotherhood and cooperation with our Arab brothers.”

In 2017, he said, “It is time to put an end to the misconception that Arabs stabbed us in the back.”

In a 2012 speech, Erdogan criticized the opposition Republican People's Party (CHP), saying of leader Kemal Kilicdaroglu, “You are behind the mentality that names Arabs dogs.”

But the lack of trust for Arabs among Turkey’s intellectuals and the rest of the public is based on historical developments. According to the Turkish Historical Society, in 1916, Sheriff of Mecca Hussein bin Ali subscribed to the British promise of independence, rose against the Ottomans and became an instrument of dividing the Ottoman empire among Christian states. This “Arab betrayal” has left a scar in Turkish minds.

Then there was a declaration by renowned historian Ilber Ortayli, who said, “Palestine, which rose against the Ottomans and betrayed them, today is paying for this betrayal with its life and property.”

The AKP came to power in 2003 and adopted a policy of rapprochement with Arabs. At the root of the party’s desire to grow closer to Arabs was, in addition to reinforcing ties, an intention to channel the economic power of the rich Arab world to Turkey. This expectation was partially fulfilled. The advances in Arab investment, real estate sales and tourism were visible. But the political solidarity the AKP wanted never materialized. Relations, especially with Saudi Arabia and countries in its trajectory, continued to be inconsistent. After coming close enough to pin medals on each other, Erdogan and the Saudi kingdom drifted apart over Syria policy.

In the latest development, the 22-member Arab League debated Turkey’s incursion into Syria and condemned Turkey for it, much to Ankara's disappointment.

While the press ran headlines like “Arab League stabbed us in the back,” no doubt the most serious disappointment was felt by Erdogan, who had been trying so hard to improve the Arab image. He reacted to the Arab League decision with a furious “Even if all of you unite, you won’t make a single Turkey.”

He went on, “Oh Arab League! Today 3,650,000 Arabs are our guests. Why don’t you see this? Why did they escape? They fled the Syrian barrel bombs. We are acting as their brothers. Did you spend a single penny for these people? Now you are making haphazard decisions about Turkey. So what if you do?”

Many top government officials were also harshly critical of the Arab League. Fahrettin Altun, communications director for the presidency, said, “I denounce the Arab League.” AKP spokesman Omer Celik said, “The Arab League, which didn’t raise its voice while Arabs, Kurds and Turkmens suffered the cruelties of terror, is disturbed by our struggle against terror. The Arab League’s condemnation of Turkey means supporting terror.”

Foreign Ministry spokesman Hami Aksoy said, “The secretary general of the Arab League, who did not say a word to denounce the cruelty that affects hundreds of thousands of people in Jerusalem, the Middle East and northern Africa, is betraying the Arab world.”

After the Arab League resolution, a remark by Turkey’s former acting president and minister of foreign affairs, Ihsan Sabri Caglayangil, was shared widely on social media: “If you are invited to an important dinner in the Middle East but your name is not on the guest list, have a look at the menu. Your name could be there.”

Reactions in Turkey now show that 17 years of effort to create a new Arab image have failed. One indication is the angry reactions to Arab-language signs all over the country. Turkey's central Anatolian province of Eskisehir began efforts to use only Turkish in all sign boards, advertisements, noting that the public's aversion to Arabic signs has grown in response to Arab states' opposition to Turkey over its Syria operation.

The angry sentiments that were once attributed only to the opposition CHP are now shared by the ruling party. In other words, the “Arabs are our brothers” thesis has been abandoned.