Assad Is a HeroFor Turkey's Neo-Nationalists

For at least 20% of the people in Turkey, Bashar al-Assad is the only hope for toppling Erdogan. 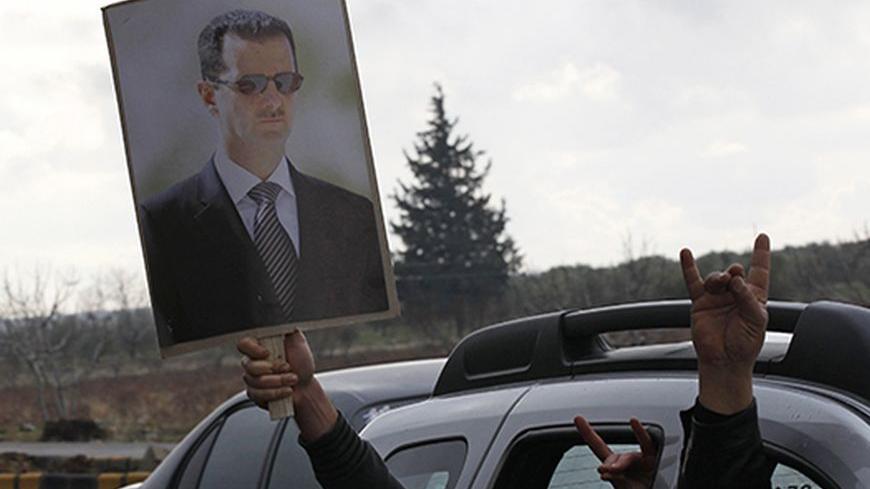 Turkey experienced an amazing episode last week when Yilmaz Ozdil, the favorite writer of Turkey’s neo-nationalists who support the military against the ruling AKP, reacted to an interview of Syrian President Bashar al-Assad aired by a pro-main opposition Republican Peoples Party (CHP) TV channel, and was instantly branded a "traitor" by the neo-nationalists who adored him.

Ozdil, a columnist for the mainstream daily Hurriyet whose motto is "Turkey is for Turks," was a guest speaker on a program hosted by neo-nationalist Ugur Dundar, a big, veteran name in Turkish television. A part of the program discussing current issues was a 20-minute segment of an interview Assad had given to the pro-CHP Halk TV. Among other things, Assad said:

"How can someone support terrorists who have killed tens of thousands of people? This shows that Erdogan is not decent man. The Turkish people must know what a fanatical man Erdogan is. When someone adheres to an introverted ideology and bigotry he becomes a man with personal problems. He doesn’t even have minimal ethical values. Erdogan has a blend of problems arising from his personal problems and Ikhwan ideology."

Yilmaz Ozdil responded indignantly to Assad’s remarks: "A leader of a country can’t speak like this. As an individual I might have gripes against my government. But no Hacivat [a comical figure of traditional shadow play who never gets anything right] has the right to get up and insult the prime minister of the Turkish Republic. The butcher of the Middle East must be made to eat these words. Are we going to learn democracy from this immoral killer? Nobody knows how many terror organizations this man and his father had nourished."

Those remarks prompted an avalanche of denunciations from the main opposition CHP constituency who define themselves as secular, modern, leftist and neo-nationalists.

This incident and some other research show that Assad has at least 20% support among the Turkish public. As some like to say, if Assad were to run for election in Turkey, he could overtake the main opposition, whose share is fixed around 25%.

Yilmaz Ozdil then summarized the reactions to his reaction: "Assad used labels such as liar, bigot, unethical, personality flaws for Tayyip Erdogan. He praised CHP and spoke of secularism. He was more prudent when calling [Foreign Minister] Ahmet Davutoglu a liar, while totally refraining from saying anything about President Abdullah Gul, who is said to have soured relations with Erdogan. You would think he is the president of Switzerland, giving lessons in democracy. For Erdogan to be a bad guy doesn’t make Assad a good one."

"Naturally I was swamped with messages. Duygu asked: 'How much did Erdogan pay you?' Mehmet said: 'You are a lawyer for Tayyip.' Utku added: 'You insulted Assad, a beloved leader.' Ulas was upset: 'We saw that you are not Ataturkist.' Levent wanted to know: 'Couldn’t believe it. Was that you speaking or your double?' 'Did you react when Tayyip was insulting his own people?' Erhan wanted to know. 'You were the journalist I adored most, but clearly Tayyip has scared you. Damn you,' Sadik said. 'It was not proper for you to defend Tayyip,' Bilgi commented. Ismail’s farewell note was, 'We were waiting to see when they will buy you out. I couldn’t hold back my tears listening to you. I won’t buy newspapers from now on.'

"Cihan was furious: 'You are speaking without knowing what Assad is going through. You’re a dishonorable so-called journalist.' Bulent was softer: 'I loved you like a brother, but Assad actually didn’t say enough.' According to Baris, 'You are a disappointment. Who are you to criticize Assad?' For Pinar, I was a 'Pen of Tayyip' and for Erkan, 'A dog of AKP.' Nese sentenced me to the dustbin of history, while Emre asked if I was now on the US payroll. Hassan wondered, 'Did you ever write about what Tayyip had done to Assad, how he tried to drag us into war, how he nourished terrorists at Hatay and then sent them to fight in Syria?' Akin asked if I was pro-al Qaeda. A reader who did not give his name but used the alias Santor declared: 'I prefer to be governed by Assad rather than be governed by AKP.' Arzu said, 'Muslim Brothers must be proud of you.'

"A professor counseled: 'Instead of telling us about the mistakes of our prime minister, you attacked Assad. That was funny. I hope you will continue to be Yilmaz Ozdil who doesn’t seek financial benefits.' Burak offered a history lesson: 'I am 20 years old. I have been reading you since I was 13. Now I rue the years I wasted and my stupidity in reading you. You are not a secularist. Read some history and remember who Mustafa Kemal fought against.' Yucel asked, ‘Please tell the truth. How much did you get paid to line up our youth behind Tayyip and send them to war?' Yucel found me as one of the biggest disappointments of his life. Kurtulus said, 'I used to love reading you, but you praised counterrevolution by resorting to anti-Assad rhetoric. Go be an adviser to Tayyip.'

“Aykan thought I was a patriot but instead I had turned out to be a disgrace. Faik declared, 'You owe the Turkish people an apology for what you said about Assad.' For Sinan, Assad was the only person to defend them. Nevzat decided I was a 'dog of Israel' and for Ekrem 'a puppet of Wahabis,' and it goes on and on."

Yilmaz Ozdil, who has been one of harshest critics of the AKP government, attributed these reactions to him from secular, leftist neo-nationalists and Kemalists to the AKP and said:

"This is a proof of what the AKP has inflicted onto this society. The fact that a leader of another country is seen as a 'hope' and people count on help from abroad is a vision not only the government, but the opposition parties which the people have given up on, must listen to carefully."

The reality is that today in Turkey for at least 20% of the people, the only hope of toppling Erdogan is Bashar al-Assad.

Middle East expert academics must think hard and long on how Baathist Assad has become a hero for the nationalists and leftists of Turkey.