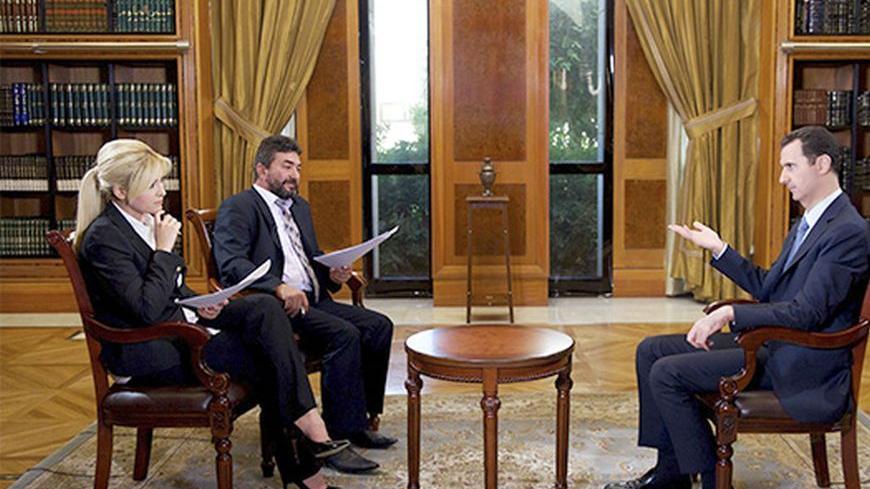 Turkey’s Halk TV aired an interview with Syrian President Bashar al-Assad on Oct. 3-4. Halk TV gained notoriety during the Gezi Park protests in June as one of the few channels reporting live from the streets. It is hardly considered mainstream in Turkish media, and has a reputation for being rather critical of the Turkish government.

Assad has been interviewed by Turkish media since the start of the civil war. However, during this interview, Assad was unexpectedly blunt and critical of the Turkish government, particularly of Turkish Prime Minister Recep Tayyip Erdogan and Foreign Minister Ahmet Davutoglu. Assad did not mince his words. He referred to Erdogan as “bigoted,” accused him of having the blood of Syrians on his hands and having exploited the presence of Syrian refugees in Turkey, while seeing the Gezi Park protests as the Turkish public’s rejection of Erdogan’s lies. This interview has escalated the war of words between the countries' leaders to a personal level.

On the Turkish front, the 60-minute interview with Assad generated uproar from some commentators. One of them, Yilmaz Ozdil — a longtime Hurriyet columnist known for his hardheaded critical stance against the Justice and Development Party (AKP) and said to be the most-read columnist in the country — shocked many viewers with his staunch defense of Erdogan. Ozdil said, “Hacivat [an Ottoman character known for being ignorant in shadow-puppet theater], the Middle Eastern butcher, cannot preach to the Turkish prime minister.” He also criticized Halk TV for airing the interview and abetting Assad’s psychological warfare. Any pro-AKP pundit uttering this would not have made the news, but the public showed its surprise on social media when Ozdil did. Ozdil’s defense of Erdogan pleased few, as pro-government Turks could not bring themselves to applaud Ozdil and the opposition was rather bitter. Many Ozdil fans blamed him for being a “sellout” and a “traitor,” so much so that Ozdil felt compelled to address the social-media lynch mob in his column the next day.

Going back to the interview, what Assad said, in a nutshell, was, “When Syria is on fire, Turkey cannot stay peaceful.” First, he highlighted his part of the story about Turkish diplomatic efforts in the beginning of the crisis to “help” Syria. In August 2011, Davutoglu and Assad had a six- to seven-hour meeting in Damascus.   It is fair to say that after that meeting, diplomatic communications between the two countries diminished significantly. Turkish government representatives frequently claim, “If only Assad had taken our advice,” yet Assad said no democratic reform was advocated by the Turkish government. Assad made a poignant reference to the neo-Ottoman attitude of the Turkish government when he complained, “Erdogan and Davutoglu repeat the allegation that Syria made reform promises to them, as if Erdogan is a sultan and I am his governor.’’ Assad claimed that the Turkish government was only interested in bringing the Syrian Muslim Brotherhood (Ikhwan) — most of whose leaders were living abroad — back into Syria, and that Turkey only asked about how many of the Brotherhood members were released from prison when he talked about reforms. Unless and until a voice or video recording — if one exists — of the Davutoglu-Assad meeting is released to the media, we may never know whose account of the exchange is accurate.

Assad claimed the Turkish government’s sole goal was seeing an Ikhwan-ruled Syria, and that’s why Turkey has supported various militant groups. Referring specifically to radical Islamist groups, Assad said Turkey will pay the price for this support: "It is not possible to put terrorism in your pocket and use it as a card because it is like a scorpion that won't hesitate to sting you at the first opportunity."

On the Turkish front, it was Davutoglu who responded to Assad. Davutoglu made headlines by stating, “Assad has no right to criticize us.” Davutoglu denied all allegations voiced by Assad, reiterating how hard Turkey works for peace and stability in Syria. Particularly, Davutoglu said Assad’s accusation of “sectarianism” was baseless, and said Assad has no credibility in the eyes of Turkish or world public opinion.

Assad raised a red flag about the increased risk of terror in Turkey because of the Syrian civil war. Civil wars are contagious. Despite all political rhetoric, the Turkish government is well aware of the elevated security risks. Al-Monitor contributors have been detailing signals of revisions to Turkey’s Syria policy since May. Kadri Gursel highlighted May 16 as a turning point marking the government’s quiet admission of the urgent need for change. The AKP has been proud of its “open border” policy and embrace of all Syrian refugees escaping the brutal Baath regime. So far, more than 500,000 Syrians have officially entered Turkey. The government knows well that Syrians are not escaping not just from the Baath regime but also from rebel infighting. Particularly, al-Qaeda-linked groups such as Jabhat al-Nusra and Islamic State of Iraq and al-Sham (ISIS) fighting against the Free Syrian Army and Kurdish armed groups in northern Syria have pushed new waves of refugees into Turkey. As Hediye Levent, a Turkish journalist reporting from Damascus for the last five years, told Al-Monitor, “Attacks in Turkey, such as at Reyhanli or those close to the border, are not seen as linked to the Syrian government in the local press because the northern parts of the country are in the hands of rebels of all sorts.”

The Turkish government has finally, yet quietly, accepted that it can no longer sustain its outspoken “open border” policy. Many of the crossing points can no longer be kept open continuously, and, since June, the Turkish armed forces have been periodically engaging in direct fire with thousands of smugglers on the border. In addition, the Turkish government has started a project to erect a wall on the Syrian border along areas laced with land mines. This is an open admission of unsustainability of the “ethical” foreign policy rhetoric which promised to host Syrian brothers as long as they needed. Now, it seems Turkey not only has the goal of toppling Assad, but also of containing the spillover effects of the civil war into its own territory.

Both Erdogan and Assad were asked whether they would run for office again, and both shrewdly avoided a “No, I am done once my term is up” answer.

Only time will tell who will stay in power, but it's a safe bet that the strong personal enmity between Erdogan and Assad will endure.