As the Kurds sic Syria's army on Turkey, Iran offers to assume the high-profile role of mediator in the crisis. 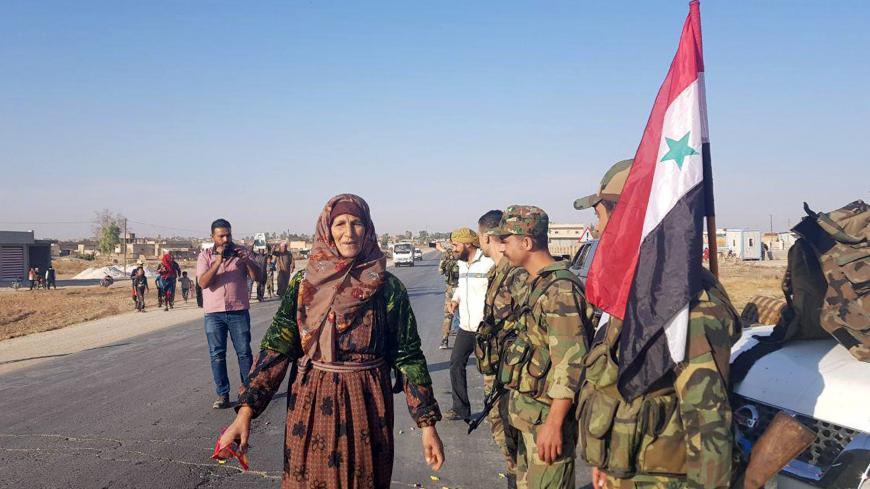 Syrian army soldiers are seen in the town of Tell Tamer, Syria, Oct. 14, 2019. - SANA/Handout via REUTERS

One Mideast player in particular looks likely to benefit from the travesty playing out between Turkey and the Syrian Kurds.

Because it has close ties to both Damascus and Ankara, Iran was in an awkward position when Turkish forces entered Syria last week to attack the Kurdish-led Syrian Democratic Forces (SDF). Ankara considers factions of the SDF to be affiliated with terrorists, though the SDF has helped the US-led coalition fight the Islamic State (IS) since 2015.

Now Iran seems to be sitting pretty since the desperate Kurdish forces took the pride-swallowing step of asking the Syrian government — which has persecuted and denied rights to Kurds in their semi-autonomous area (Rojava) for years — for help against Turkey early this week. That leaves Iran in a position to mediate an agreement.

Seyyed Mohammad Marandi, a political analyst and a professor of English literature and Orientalism at the University of Tehran, told Al-Monitor, “Iran recognizes Turkey’s concerns in Syria, but Iran thinks the only solution is to get both Turkey and Syria to a sort of rapprochement, and it’s working to achieve that."

At an Oct. 14 news conference, Iranian President Hassan Rouhani said he hopes for an end to the Turkish invasion of northern Syria, which he said is not good for either of those countries, or for the region. He added that Iran accepts the "principle of Turkey's concern" along its border, but added: "The way they have chosen — we do not accept it. It is not a good route. Better routes exist."

To Iran, there are many other routes. Perhaps the best for Tehran is the one taken Sunday by the Syrian government and the SDF — which clearly came under Russian auspices.

After US President Donald Trump announced his widely condemned decision to abandon the SDF and withdraw all US troops from Syria, the Kurdish group turned to Damascus. The resulting deal protects them, at least temporarily, and gives more leverage to Syrian President Bashar al-Assad and his Russian and Iranian allies.

“An agreement has been reached with the Syrian government, whose duty it is to protect the country’s borders and preserve Syrian sovereignty, for the Syrian army to enter and deploy along the Syrian-Turkish border to help the SDF stop this aggression” by Turkey, the SDF said in a statement.

As of Oct. 14, Syrian troops started replacing SDF forces in several areas, including Manbij and Tell Tamer. Areas under the SDF's control were subject to heavy bombardment over the weekend, with Turkey making gains in the key border towns of Ras al-Ain and Tell Abyad. Reports indicate dozens of people were killed in the assault.

“Iran, which has supported the government in Damascus since 2011 [when the civil war began], regards any move by Syria to restore sovereignty over lost lands as a step forward to end the war, and as a victory for its ally,” Iranian journalist Siavash Fallahpour told Al-Monitor. Much of the land in question was taken from the regime by IS fighters until the Kurds expelled them.

He added that even without the Syrian army deploying on the borders, just having US forces leaving northeast Syria “is good news for Tehran."

"The area wasn’t under [Damascus' recent] direct control or the control of its allies, so even if the Turkish government took control, given the relations between Iran and Turkey, this wouldn’t have been a game-changing event,” Fallahpour stated. “If Iran was to choose between a long-term SDF and US presence in the area, or a short-term Turkish operation, it would probably prefer the latter."

Earlier, Iranian Foreign Minister Mohammad Javad Zarif had called on Turkey to respect Syria’s sovereignty. He said in an Oct. 10 interview with Turkish state broadcaster TRT, “We do not believe that security can be achieved by invading Syria. … We have offered better options to our Turkish friends, like the [1998] Adana agreement.“

Zarif offered Iran's mediation: “We can help bring together the Syrian Kurds, the Syrian government and Turkey so that the Syrian army together with Turkey can guard the Turkish border."

Leading negotiations between Syria and Turkey is the best-case scenario for Tehran. Iran enjoys good ties with both countries, but relations with Turkey started improving only a few years ago. “The [2016 failed] coup in Turkey was a turning point, then the siege of Qatar brought the two countries closer," Marandi said. "The US occupation of northeast Syria was also a strong factor."

Another aspect that will play into Tehran’s hands is Syria reining in the SDF's regional role. Tehran doesn't want Kurds in the area to aspire to that kind of influence — especially Iranian Kurds.