How local groups, volunteers are helping displaced in northern Syria

Local organizations and volunteers are mobilizing efforts to cater to the needs of thousands of displaced who fled the Turkish offensive in northeastern Syria. 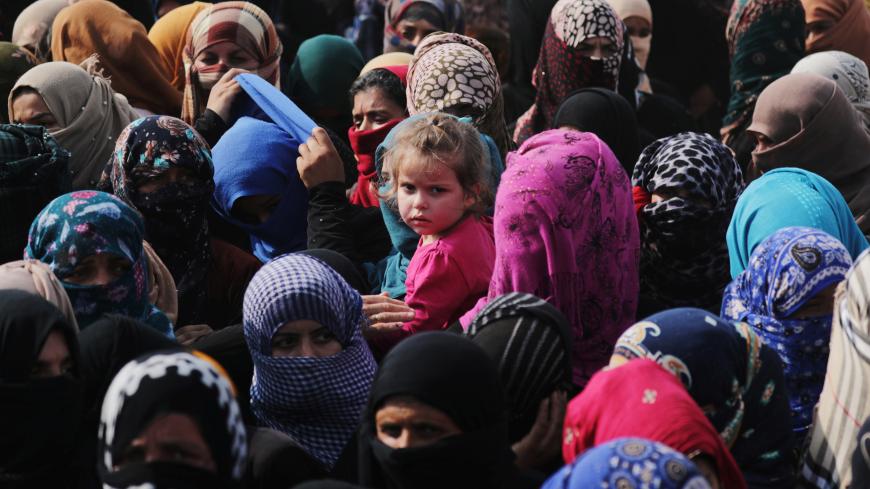 Since Oct. 9, the area expanding from Sari Kani/Ras al-Ain to Gire Spi/Tell Abyad in northeastern Syria has been witnessing clashes and violent battles between the Turkish army and armed factions affiliated with the Syrian opposition and the Kurdish-led Syrian Democratic Forces.

Although Turkey agreed to pause its offensive Oct. 17, the waves of displaced from these areas increased because people feared for their lives. According to the Syrian Observatory for Human Rights, around 300,000 people have been displaced from Sari Kani since the clashes broke out.

A video posted online showed a large displacement from Sari Kani to various Kurdish communities. As a result, a group of young people from local civil organizations in Qamishli launched personal initiatives to provide the displaced with some of their needs.

Activist Naz Hami told Al-Monitor, “The idea started with some civil society activists to get a feel of the field situation of the displaced from Sari Kani. We formed a crisis cell made of local organizations in Qamishli, then we collected financial donations from members and examined the needs of the displaced.”

Hami said, “International humanitarian organizations concerned with the situation of the displaced are usually delayed in their implementation phase due to the routine they have to follow and the special arrangements, including the provision of records and charts detailing needs before resuming work. Therefore, we wanted to provide statistics and records about the number of displaced and their needs to put them at the disposal of international organizations whenever they arrive.”

A source who works at an international organization told Al-Monitor, “All international humanitarian organizations operating in the east of the Euphrates are funded by countries of the coalition such as France, Britain and the US. But when the US decided to withdraw from the east of the Euphrates, and with the return of the Syrian state to the area, the operation of these organizations was directly affected, as they halted their work in the area and withdrew. These organizations do not operate in areas where the Syrian state is present because they are not authorized by the state but rather by the [Kurdish] self-administration. The withdrawal left a gap in relief work and disrupted their actions.”

Regarding the challenges, Hami said, “Most [local] organizations do not have experience in relief work, as their activities are restricted to raising awareness, social unity, restoration and dialogue. International organizations that withdrew were more concerned with relief work. Besides, the necessary plans for first aid response and assessment tools and all forms and data to evaluate primary needs were missing and were based on our modest experience.”

Hami regretted that the support did not include many families because of the funding circumstances and the large number of displaced. She said, “Due to lack of capacities, only the needs of 160 displaced families in Tell Tamer and Girke Lege were covered, which means 750 people. The numbers [of displaced] are large, and the situation is dire to the extent that the majority of families left only with their clothes. They need everything else, and each family requires financial coverage of $350-$400 to buy the essentials. But this is beyond our capacities, and we cannot meet all their needs.”

Hami said there is no financial funding, except for donations from the local community, which includes “material such as clothes and blankets. We bought other essentials such as milk for children and necessities for women, such as cleaning material from our own donations.” Naz praised the work of the Kurdish Red Crescent and the Office of Humanitarian Affairs’ Organizations for working with activists and coordinating and networking with other organizations; she also lauded the presence of civilian groups in other areas doing the same work.

Activist Anders Walika told Al-Monitor about the public responsiveness to the initiative. She said, “The people gathered around us and offered clothes, kitchen utensils and food. Support is ongoing, and people are asking about what more they can offer. We have a lot of donations from different social groups in Qamishli.”

Wlika added regretfully, “Our work is tough and slow due to the large number of displaced, the huge pressure and the limited statistics. We asked residents not to send their in-kind aid before we complete the statistics and assess the needs to ensure that the donated material is useful for the displaced.”

Activist Osama Ahmad told Al-Monitor, “We divided the volunteers into three groups to handle specific tasks to facilitate the work — field work, statistics and collection, and sorting of aid. We are facing problems with statistics in the villages in southern Darbasiyah, because the displaced did not receive what they need. Volunteer groups are small in the area, and their financial capacities are weak. Besides, the needed expertise under such circumstances is missing, especially after international organizations specialized in funding and support left.”

According to Ahmad’s statistics, “The number of those displaced to Girke reached 1,700, in addition to 12,000 to Tal Maarouf, Tal Hams and Tirbespi. The largest number of displaced landed in Tell Amer because of its proximity to Sari Kani and in Hasakah because of its distance from the Turkish borders with the east of the Euphrates.”

He added, “The needs vary and range from a lack of sufficient number of shelters to lack of foodstuff, mattresses, blankets, milk for children and women’s needs.”

He offered some suggestions to support the volunteering groups such as “boosting coordination and networking among the volunteer organizations and groups, allocating special groups for the areas that are mostly welcoming the displaced and finding out the needs of families hosting the displaced to help them with their expenses and to supply the displaced with essentials.”

Barzani Charity Foundation provided an aid van for the displaced carrying tons of foodstuff and house appliances via 27 trucks, accompanied by a field team with experience in managing emergency situations. They sent urgent relief to the displaced. The director of the foundation called on donors, philanthropists and international companies and organizations to deliver urgent aid to the homeless displaced within Syria.

One of the displaced, who asked not to be named, said, “The bigger problem happens when we return and find our houses destroyed. Who will rebuild them?”