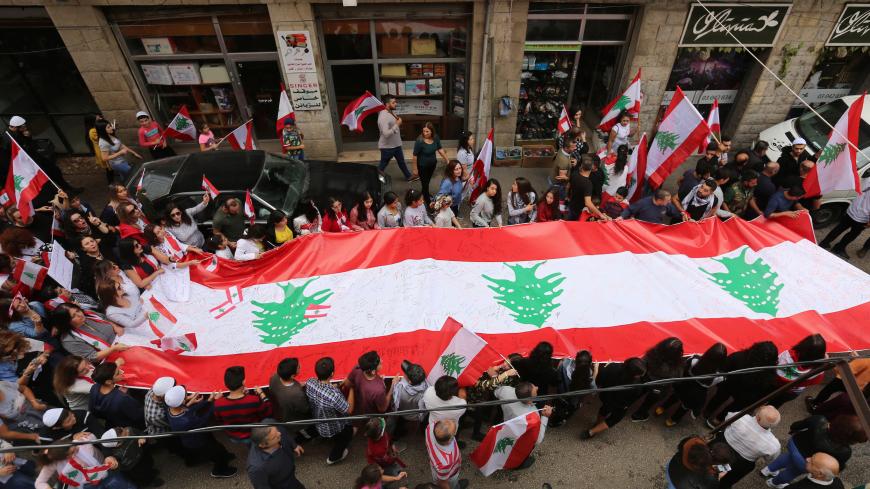 Lebanese Prime Minister Saad Hariri’s ambitious 24-point reform package and President Michel Aoun’s offer to meet with protesters have so far done little to quiet the demonstrations in Lebanon, which have entered their ninth day.

What started as a protest of a tax on WhatsApp has morphed into a movement of mostly young people calling for a full overhaul of the government.

What sets the protest apart is its cross-sectarian nature. Lebanon is turning away from the past and toward a new social contract. There is much risk and uncertainty — but there is also excitement — revealed by brave protesters who have put country above sect, and who have made the region, and the world, take notice.

The calls for change are both inspiring and not unexpected.

Lebanon has a population of nearly 6.8 million, with an estimated 42% under 24 years of age. The official unemployment rate of about 6% is not high, by regional standards, but with almost no economic growth (a projected 0.2% rate in 2019, following just 0.3% last year), the good jobs are fewer and fewer for young graduates. Lebanon’s deficit and debt are approaching 155% of the gross domestic product, among the worst ratios in the world.

More troubling, corruption and side deals inhibit the government from delivering even reliable trash collection — in contrast to the protesters, who have made a point of keeping the streets clean after the demonstrations.

Lebanon’s upheaval shares many similarities with the demonstrations in Egypt and Iraq, which are also driven by youths who have had enough of an older generation of leaders whose legacy has been marked by identity politics, poor government services and corruption.

But it also reflects a distinctly Lebanese trend that has been developing for at least five years and is now reaching its crescendo.

Back in April 2014, Al Monitor identified this emerging pulse.

“Lebanon,” we wrote then, “might be on the verge of a social and economic upheaval that could unite many Lebanese around a new banner for change.”

The March 8 and 14 movements, we suggested, seemed “increasingly, if not completely, out of step with times. Lebanon may benefit from an immunity to the sectarian virus, as its own experience with such polarization has led to endemic disappointment with that same rhetoric and false hopes, and an approach to politics that has betrayed its own people and left them with the feeling of being abandoned and powerless in the shadow of agendas that are not theirs.”

“That Lebanon could lead in this new social contract,” we proposed, “should not be a surprise. Lebanon did its time with its own bloody 15-year sectarian regional war, and still was able to recover and re-establish its cosmopolitan flair. There is a lot to build on. The failures and dashed expectations of the uprisings in Egypt and Syria, which quickly fell prey to regional and ideological agendas and violence, and Lebanon’s own tragic past, could make it an incubator for a new approach to governance that would allow Lebanon to realize its potential, rather than fall victim to the rhetoric and false promise of what was once known as the Arab Spring.”

And just over a year ago, Al-Monitor added that “this new social contract is the path out of the current impasse … The March coalitions, rooted in identity politics and patronage, have had their day, and the record has been, at best, unremarkable and disappointing. Lebanon is showing it is capable of more” — an approach to governance “based on accountability to the Lebanese and not to foreign capitals, and thereby a model for the region.”

US: Low-key support for reform

The Trump administration has been supportive of the proposed reforms, but has taken a low-key approach so far, given the rapid pace of developments and the uncertainty about what comes next.

The US Embassy in Beirut tweeted on Thursday, "Recent events underscore the need for a frank discussion between the Lebanese people and their leadership about the future of their country and reflect the Lebanese people’s longstanding demands for economic reform and an end to endemic corruption."

US Ambassador to Lebanon Elizabeth Richard joined other representatives of the International Support Group for Lebanon (ISG) for a meeting with Hariri on Tuesday.

According to Naharnet, other ISG representatives included the ambassadors of Russia, France, the UK, Germany, Italy and the EU, the Chinese charge d’affaires, the UN special coordinator for Lebanon and a diplomat from the Arab League.

UN special coordinator Jan Kubis, speaking for the ISG, said that the reforms “should substantially reduce corruption and waste [of public funds] and move away from sectarianism and should put government in full accountability and lead to sustainable development and stability. Their grievances must be addressed.”

Kubis said Hariri confirmed to the ISG representatives that that the government would “not allow anyone to threaten the protesters,” praising the “largely responsible behavior of the Internal Security Forces and the Lebanese Armed Forces that notably since Saturday have respected people’s right to peaceful protest.”

In follow-up meetings, according to al-Sharq al-Awsat, the ISG has suggested the Lebanese government deliver a "political shock" to accompany reforms.

On Friday, Hassan Nasrallah, secretary-general of Hezbollah, Iran’s ally in Beirut, threw his support behind the government and its reform package, warning of an alternative of “chaos and collapse” or, "God forbid," civil war. He said, “It is in the protest movement's interest that we and other parties stay away from it,” and appealed to his supporters to leave the streets to avoid confrontations with demonstrators. He blamed “Gulf media” and “domestic parties” for exploiting allegations that Hezbollah attacked protesters, and raised questions of foreign and political support for the demonstrators.

The United States has been concerned that if Hariri’s government falls, there would be even more economic uncertainty, no partner with which to engage economically and a political void that could be exploited by Iran and Hezbollah.

A senior US official, speaking on background to Al-Monitor, confirmed that the United States supports the Hariri government pressing ahead with the reforms, noting the important role played by US assistance, including aid to the Lebanese Armed Forces, as Jack Detsch reports.

“We are concerned about the stability of the government in Lebanon,” that official said. “We believe our security and nonsecurity assistance to them helps with keeping the government stable and counters the negative influence of Iran.”

Can the reforms meet the demands of the street?

The Hariri reforms are a bold and overdue start for this new social contract we have been covering for the past five years.

The catch for Lebanon, as it has been for Egypt, is that most International Monetary Fund-based recommendations to address bloated and corrupt public ministries require downsizing and reductions in subsidies — such as electricity and gasoline — and an expanded tax base — the very things that trigger the protests of those already on the economic margins.

In other words, the short-term urgency of meeting the demands of the street need to be combined with a long-term plan for structural reform. This could be accomplished via a new government, quickly formed, or by getting the buy-in of those demanding change by adding new faces and technocrats to those vital ministries that manage economy and infrastructure and are widely associated with corruption and inefficiency.